In Ines Eberl’s novel, HUNTER’S BLOOD, a young physician, Emma Canisius, takes over a practice in the Austrian mountains.  It’s fall and the hunting season.  One day, her landlord is found dead with a dagger in his chest and the head of a white chamois on his face.  When Emma is attacked herself, she knows that she has to find the murderer before he gets to her.

Biography:  Ines Eberl is an Austrian law historian and practicing lawyer as well as a crime author.  She lives and works in Salzburg.  Her first novel, SALZBURG DEATH DANCE, released in 2011, has met a great reception.  Now she’s looking for a publisher for an English language edition.  Richard Godwin gave her an interview at The Slaughterhouse.  Her new novel, HUNTER’S BLOOD, is based on an old case.
I caught up with Ines and had a chance to ask her a few questions.

Is there anything special you’d like to tell us about HUNTER’S BLOOD?

HUNTER’S BLOOD is part of a series of mysteries that takes place in the beautiful Austrian landscape. Leading parts of my novels are the atmosphere and the setting. My first book, SALZBURG DEATH DANCE, takes place in the old town of Salzburg. In HUNTER’S BLOOD, there are the high Austrian mountains in fall during the hunting season.  I believe that reading my novels should be like a journey, too.

HUNTER’S BLOOD is based on a true crime. In the fall of 1923, the so-called battle of Mayralm took place in Austria. A hunter and a poacher were killed, the latter shot in the head. The circumstances of his death have never have been brought to light. But until today there is the rumor that he was killed by his companions.

My first novel has met with a great reception in Austria and Germany.  Therefore the press is expecting the sequel. And I attach great importance to good contacts with my readers, libraries and, of course, booksellers.

The next settings of the series will be a lake near Salzburg and a glamorous ski resort in the Austrian Alps. And – beside the series – a political thriller is already in progress. Right now we are working on an English-language edition of SALZBURG DEATH DANCE.

I’m a law historian and practicing lawyer as well as a crime writer.  Books take a great part of my life. Writing and reading them are my favorite hobby as well as my profession. I’m married to a lawyer and a mother of two, so spending time with my family always  provides me balance and support in my life. And I’m a hunter. I love to be outside in the Austrian mountains joining my husband on the hunt especially with my dog, a Golden Retriever, by my side.

Thanks so much, Ines.  Good luck with HUNTER’S BLOOD.  I look forward to reading it. 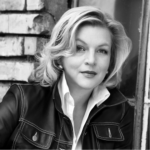 I’m an Austrian law historian and practising lawyer as well as a crime author. I live and work in Salzburg. My first novel Salzburg Death Dance, released in 2011, has met with a great reception. Now I´m looking for a publisher for an English-language edition. Richard Godwin was so kind to give me an interview yet at his Chin Wags At The Slaughterhouse. My new novel HUNTER’S BLOOD is based on a cold case.