“My mother tells me I was born in Texas a very long time ago, but I’m not so sure—my mother can’t be trusted.”  This is how Vegas resident and writer, Deborah Coonts, begins her biography on her website.  Now close your eyes, and imagine the fun I had interviewing her for this article.

Her newest and third book in the Lucky series, SO DAMN LUCKY, was released in February, 2012 as a hardback original.  Imagine…Halloween in Vegas—a “clothing optional” weekend where body paint and a tail earn carte blanche at the finest clubs. Lucky O’Toole, the chief “problem solver” for the Babylon is up to her armpits in UFO aficionados looking for “close encounters,” Houdini fans lured to Sin City for the annual séance hoping this is the year the master communicates from the Great Beyond, and magicians on a witch hunt for a traitor in their midst who is selling secrets for fifteen minutes of fame.

Of course, Lucky is adept at keeping a lot of balls in the air. But, when her live-in goes AWOL, a French chef turns up the fire, her mother punches every button she’s got, and a magician disappears….things get complicated.

SO DAMN LUCKY is the third Lucky O’Toole Las Vegas Adventure, and perhaps, the craziest one yet. You be the judge. Join the party!

‘What happens in Vegas stays in Vegas’ doesn’t apply to Deborah Coonts series of Lucky O’Toole Las Vegas Adventures.  It’s okay to tell about Lucky’s thrilling exploits.  So, please give your friends a shout and tell them to pick up a copy of SO DAMN LUCKY.

“Coonts covers Sin City territory with a dash of CSI and Janet Evanovich in her second glitzy, lighthearted novel.”—Publishers Weekly on Lucky Stiff

How did Lucky O’Toole come about?  Is she based on a real person, or is she purely fictional?

Curiously, Lucky is sort of based on the city of Las Vegas.  I know that sounds idiotic, but I really tried to imbue Lucky with some of the traits of my adopted hometown.  Folks in Vegas are pretty much a live-and-let-live group—very non-judgmental.  And we tend to take folks and their shenanigans with a grin…and a martini or two.  The whole human parade is on view in Vegas—either you find it fascinating and fun or you get the heck out of town.  Lucky tries to find something good or interesting in everyone—I like that about her.

I’m sure your readers will want to know, what is it like living in Sin City?

My stock answer is that Vegas is pretty normal—like southern California without the beach.  And, that’s a lie.  Living in Vegas is more like living on the backlot at MGM Studios or Twentieth Century Fox.  People in costume mingle with “normal” folks.  Professional unicyclists and acrobats, vie with magicians and singers for entertainment dollars.  It’s perfectly normal to have Elvis bag your groceries, or to meet him coming out of a local diner.  When someone unearths bleached bones in the desert, the story doesn’t even hit the front page.

And, with stores open all hours, you really can shop ‘till you drop—my favorite thing.

So, really, living in Vegas is like being on indefinite vacation—if you take all your strange family members with you.

How much, and what type of research is necessary to delve into the Vegas scene?

Funny you should ask about research.  I have a waiting list of people who have volunteered to go with me.  I do a lot of exploring in Vegas—behind the scenes as well as going to venues open to the public.  And I never knew how dangerous this could be.  For instance, when I asked the young man in the pith helmet at Shark Reef at the Mandalay Bay Hotel if the Tiger Shark would eat a dead body if I threw it in the tank, I had to talk him out of calling security.  And there was the night at the male strip club…I had no idea male stripping was a contact sport.  Or that the young men would not take kindly to a patron who couldn’t stop laughing.  I’m learning, but I still have 911 and a good attorney on speed-dial.

You mentioned that you have worked as an accountant, a business owner, and a lawyer.  Were any of these satisfying personally, and how did you become a writer?

I’ve always adored stories—they’ve been my escape since I was small.  The jobs you listed above were just means to an end—they kept me off the streets and food on the table.  But stories resonated in my soul.  I starting writing in Middle School, but I wasn’t raised in a time or a place when imagination was appreciated.  So, as an adult, my writing turned toward non-fiction—I wrote a humor column for a national aviation magazine for a while.  The stories all dealt with a husband and wife in a cockpit—a pretty funny set-up or a great prelude to homicide.  But I’d always loved fiction, and consumed it ravenously.  One day, while very bored on the Stairmaster, I came up with the bright idea that maybe I should try to write a novel.  Boy, if I’d only known what I was getting into….

What drew you to write thriller fiction based in Vegas?

The whole world wanders through Vegas.  The stories are endless…

I know that you use a lot of humor in your books.  Has that always been the case with your writing?

I tried writing romantic suspense, but the funny just kept popping out at the most awkward times.  Finally, I gave up.  For a gal who is fluent in sarcasm and who minored in innuendo, humor is the only way to go.

What other type(s) of writing have you done, and which do you prefer?

I really like to make stuff up.  Couldn’t get away with it…much…when I was a lawyer.

Do you have a writing routine?  Without giving your ‘special’ place away, is there a special type of place that you like to work?  Any hints or tips for upcoming authors?

I need noise and energy when I write.  Many mornings you will find me in a Starbucks swilling coffee until I shake.  Sometimes I have my headphones on, sometimes I just let the sound of life surround me.  If the words aren’t coming too easily, I may repair to a bar and swill wine instead.  I may not be funnier after a few glasses of Pinot Noir, but I think I am.

Are there future adventures on the horizon for Lucky?  Will you give us a peek? 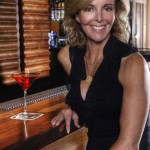 Lucky, that gal has a nose for trouble.  I’ve just finished book four, LUCKY BASTARD.  And there really is a lucky bastard in the story, which starts with a young woman, sprawled on the hood of a Ferrari, with a Jimmy Choo high-heel stuck in her neck.  As Lucky would say, “Death by Jimmy Choo, at least she went out with style.”

Also, I’m putting the finishing touches on a Lucky novella, LUCKY BANG, which will be published in digital format only around the first of July.  It takes place over the 4th of July weekend and starts off with a …bang.  No, not that kind of bang…an explosion in the restaurant of one of Lucky’s friends, Jimmy G.

If you “wanna get lucky” visit Deborah’s website for more on her current and upcoming releases.