Steven Pressfield began his career as a novelist with The Legend of Bagger Vance, about a golfer who is haunted by his wartime experiences. He has been writing about war and soldiers ever since, in such historical novels as Gates of Fire, Tides of War, Killing Rommel, and others. His new military thriller, The Profession, is set in the Middle East in 2032 and depicts a future in which war is contracted out to mercenaries. Recently he spoke about his work and his vision of war, past and present.

Your previous books share the theme of war but have all been set in the past, some of them in the distant past. What made you jump into the future with The Profession?

I’ve been creeping forward in time, Sandra, with my most recent Killing Rommel set in WWII. The idea for The Profession just seized me, the way ideas sometimes will — and it was set in the future. I had no choice but to follow.

In The Profession, military operations are financed and run not by governments but by gigantic global corporations, and the soldiers are mercenaries. Do you think this may actually come about? Would it be likely to increase or decrease the incidence of warfare?

I can’t prove it, but I will bet you that of the operational team that just took out Osama bin Laden, a significant portion were private specialists — in intelligence, political affairs, etc. Already the number of contractors in Iraq and Afghanistan equals or exceeds the number of troops. The idea that standalone fighting units, battalion- or brigade-sized, could be organized privately is only a half-step away. The economic model would work. Think about Libya right now. NATO or US troops can’t go in on the ground because it would be politically unfeasible (the act would constitute an invasion of a sovereign state, not to mention it would provoke outrage among the home population because of casualty-aversion and many other reasons). On the other hand, a privatized force, if one existed, could be sent in under the auspices, say, of the UN and save a lot of lives.

History confirms that mercenaries come into use in the twilight phases of any empire. We’re in that era (or getting close) right now.

What kind of research did you do for the book?

I traveled to Afghanistan, spent a great deal of time with Marines and Special Forces, and read and studied everything under the sun.

By your own account, you hated Marine boot camp and were glad to see the last of Parris Island. How did you end up writing book after book about war and its effect on soldiers? When did your interest in exploring this theme take root? 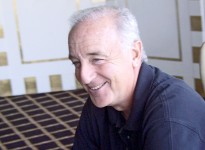 It’s crazy, isn’t it? I never could have predicted it and, to this day, I don’t understand why. I think that my interest is less in war per se than in struggle against adversity. You might be familiar with another book of mine, The War of Art. It’s about writing, or, more precisely, the struggle that we all wage every day against internal enemies like self-doubt, fear of failure, fear of exposure, fear of success. To me, life is a battle — a battle against enemies inside ourselves. So the war metaphor appeals to me and gives me great thematic, emotional and visual metaphors to use to express my point of view.

Do you think the causes, the goals, and the effects of war have changed over the millennia – or is it just the weapons that are different?

There’s a couplet we’ve been using with The Profession: “Wars change, warriors don’t.” The struggles of the human race are still over resources, pride, honor and power. Only the weapons and the scale of destruction have changed.

The narrator of The Profession has “memories from another life” and believes he has a second self who has lived before. Do you believe in past lives? Do you believe you have lived before – and if so, do you have any inkling of who and what you were in that life?

I definitely believe in past lives, but that was not the point, in The Profession, of having a protagonist who feels that way. Nations and cultures, as we know, evolve through predictable cycles. A society will have an adolescence, a youth, an era of greatness and then a decline and fall. The pattern is repeated throughout history. I wanted my hero, “Gent,” in The Profession to have a certain world-weariness about this. As he experienced the decline of an empire in the present-day, I wanted him to have the sense in his cells that he had been through this before — because we all have, history has.

As for myself, I’ve written five novels set in ancient Greece but none set in ancient Rome. Why? I have no idea, except that one culture, the Greek, feels absolutely familiar and intimate to me, while the other, the Roman, has no appeal whatsoever. Did I have a past life in ancient Greece? I don’t remember it, but I feel like I know the place and time — and there must be something to it, because Greeks today universally name me as “one of their own.” And I’m delighted to be one of their own!

When U.S. troops become involved in a prolonged ground war in a country where the culture is radically different from ours, they tend to have problems. As a student of war, what do you think could be done to help our military men and women do their jobs most effectively in places like Iraq and Afghanistan?

A great question, Sandra. Language training would be a great place to start. But how, practically, can the U.S. or any military provide that? War locales keep changing. Will we be learning Somali or Swahili next? Cultural awareness unfortunately is acquired by our soldiers and Marines on the ground. It’s on-the-job training mostly. Alas, it’s simply prohibitive in terms of training cycles and time to “train up” a young trooper as well as he would need to be trained culturally and linguistically. We need our guys on the ground NOW.

One of the reason why I believe privatized forces will predominate in the future, if conflicts remain much as they are today, is that soldiers-for-hire will be older (they’ll be four- and five- and six-tour veterans of the conventional military) and they will have had time to learn languages and study cultures and they will of course have actually served on the ground in those cultures.

Do you believe the death of Osama bin Laden will change the course of history in the Middle East in any substantial way?

I do. I may be completely wrong, but I think that this “head of the snake” was of such stature in the radical Islamic world and had become such a larger-than-life, mythic figure that his death — particularly at the hands of Navy SEALs, on the third floor of his million-dollar fortified compound in an affluent Pakistani community — will be a tremendous emotional blow to al Qaeda and to the whole mythos of global jihad. The snake won’t die but it’ll be dazed for quite a while. With any luck, the “Arab Spring” movement will supersede the movement of global terror. That doesn’t mean that this new arrangement won’t create even more trouble for the West. It probably will.

On a much lighter note, you have a regular blog feature called Writing Wednesday, and you published The War of Art for writers. Do you feel an obligation to help other writers? Do you get feedback from people who have benefited from your advice?

I do. And it’s mainly because of the feedback. The blog started a couple of years ago as a purely military thing: it was originally called “It’s the Tribes, Stupid,” and it was a blog urging that tribal factors be taken more into consideration in the formulation of U.S. policy in Afghanistan. But people starting writing in about The War of Art and wanting to hear more in that vein. So we started “Writing Wednesdays” and it has grown and grown.

I’m superstitious, Sandra, so I must keep mum. I’ll say this: it’s about war but it’s non-fiction. Not a novel.

The Devil Colony by James Rollins