Critically acclaimed author Ken Mercer follows up his best selling Slow Fire with another suspenseful tour de force, East on Sunset. The book features the return of narcotics detective Will Magowan, now retired from law enforcement and starting over with his estranged wife.

Magowan is a vulnerable man not prone to sharing his feelings, but a good man nonetheless with all the makings of a hero, according to Mercer.

“You’d like him once you got to know him,” Mercer says, “but he’s a little hard to get to know. If you invited him to a party, I don’t know that he’d show up.  Once you get to know him, he’s a great person to have in your corner, because he’s loyal and stands up for what he believes is right–even when it costs him personally.”

Magowan proves that true when a man named Erik Crandall makes a mysterious demand.  As an LAPD detective Magowan sent Crandall to prison years before.  When Magowan tried to avoid Crandall’s request it leads to violence.

In this book Magowan is disillusioned about being able to accomplish what he thinks is important.  This is part of why he left law enforcement, and gives him a hardboiled private eye vibe.  But Magowan is neither a policeman nor a P.I., so East of Sunset is technically neither a police procedural nor a noir novel.  In fact even the author can’t easily drop this novel into a sub-genre.

“It functions as a thriller, which I define as a story about an ordinary person being thrown into a perilous situation and having to find some way out to save themselves,” Mercer says.  “That’s also what interested me about the book: Will has the background, training, and experience of a police detective, but needs to find a solution to his problems without the resources or help of the department.  The book kind of lives between several genres.” 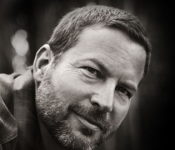 Mercer concedes that “crime novel” might be the best description for East of Sunset. He is a masterful storyteller with a broad writing background.  He has written for newspapers, magazines, radio, television and film, but he says that writing a novel different because the author has complete control.

“While your editor and publisher are there to support you,” Mercer says, “the understanding is that the book is your baby, and you get to live or die by it.  The other thing is that it simply takes longer to write a novel.  This is both good – because you get time to really live with it for a couple of years – and bad – since it takes over your life for a couple of years.”

In this case, the sacrifice of time paid off handsomely.  The tension mounts as Crandall threatens to destroy the new life that Magowan has built.  Our hero ultimately risks everything to uncover secrets deeply buried in the past.  In the process he learns that almost everything he knows about his life is a lie.  East of Sunset will make you gasp, and make you think, but beyond all that, it will make you feel for the hero and his world.  Or, in Ken Mercer’s own words:

“If you enjoy reading crime novels that are hard to put down but don’t make you feel dirty because they’re written at a third grade level for business travelers to plow through before landing, then you might want to check this book out.”

This means you, thriller fan!