Neil S. Plakcy offers a tightly-plotted police procedural mystery in his latest novel, MAHU BLOOD. But what sets this 6th outing in the Mahu series apart from all the others is that he also serves up an emotionally charged thriller about family values in Hawaii.

In MAHU BLOOD, openly gay Honolulu homicide detective Kimo Kanapa’aka must learn who killed Aunty Edith Kapana at a Hawaiian nationalism rally. The death sets off competition between several groups for control of the millions of dollars at stake in reparations for the US takeover of Hawaii in 1893. One of the groups competing for the chance to lead a sovereign Hawaii bases its claim on the familial descent of its leader.

“The question of “blood” is an important one for Native Hawaiians,” Plakcy says. “How much of your lineage comes from the aboriginal settlers of the islands? How much Hawaiian blood must you have to be considered ethnically Hawaiian, and to take part in any cash settlement that comes out of reparations for land stolen when the US overthrew Queen Lili’uokalani in 1893?”

The issue of what makes a family is also important to Kimo, as he moves in with his life partner and they begin to integrate their blood relations together. In the novel Kimo’s family ends up in deadly danger too. 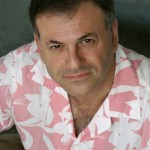 As reviewer Oline Cogdill noted in the Ft. Lauderdale Sun-Sentinel, “Plakcy’s strength in creating believable characters shines.” Indeed, the author shows all aspects of his characters, from their relationships to their sex lives. However, neither Kimo nor this novel is defined by the character’s sexual orientation. But Plakcy says that writing Kimo is different from writing a straight detective because of the personal arc he imagined from the beginning.

“In the first book in the series, MAHU, he’s dragged out of the closet while investigating a case,” he says. “In each successive book he goes through various stages of the coming out process– making gay friends, dating, falling in love, settling down — while investigating cases that force him to deal with his own emotional issues.”

In any series, the reader needs to like the protagonist, and I think most people will like Kimo. He comes across as a good guy, and he’s multi-faceted.

“He’s passionate about his job protecting the people of Honolulu,” Plakcy points out. “Coming from a surfing background, he’s pretty laid back except when he’s pursuing killers. He has a good sense of humor and he dances a mean hula.”

The point is, there are so many sides to his character that the author doesn’t let his sexual orientation define him. Being a native of Hawaii allow him to relate to the Native Hawaiian characters and understand their struggles, although being part Hawaiian, part Japanese, and part white makes him the classic outsider hero in many situations.

Plakcy handles the police procedural side of the story well too, thanks to the FBI’s Citizen’s Academy and lots of other police courses. And he works with local police experts to make sure he gets procedures right.

Luckily, he can rely on his own knowledge to get the setting right. He captures the essence of both Hawaii and the surfing culture. Plakcy says he loves the contrast between the tropical paradise that tourists see and the gritty criminal underbelly.

“As a former FBI bureau chief pointed out to me at a meeting in Honolulu, the cops and the crooks all know each other– in many cases they’re related, or they’ve grown up together,” Plakcy says. “The insular nature of an island adds great tension to a crime novel; you can’t just get in your car and drive away.”

For us mainland readers there’s also all the cool stuff we see in Hawaii Five-0: the surf culture, the great food, the fabulous scenery. Everything about Hawaii is exotic to the outsider.

If you turn out to like Kimo’s company as much as I expect, you can plan on more meetings. Plakcy did all the research for several books when he was in Hawaii in 2009 (at Left Coast Crime, where MAHU FIRE won a Lefty award for best police procedural.) The next novel is already drafted and in the rewrite stage, primed for a 2012 release. And while Neil S. Plakcy awaits your response to Mahu Blood, he is already thinking about what happens next.

“How will I keep the series fresh after six books?” he asks. “That’s an interesting challenge and one I’m looking forward to.”

He also writes Aidan and Liam bodyguard adventure series, Three Wrong Turns in the Desert, Dancing with the Tide and Teach Me Tonight (2011).

His other books are In Dog We Trust, a golden retriever mystery, as well as the novels GayLife.com, Mi Amor, and The Outhouse Gang and and the novella The Guardian Angel of South Beach.

Against the Law by Kat Martin

The March Edition of The Big Thrill