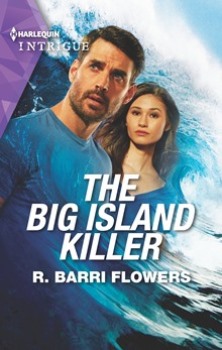 To catch a serial killer stalking paradise,
they’ll risk everything…

Few leads. No witnesses. Detective Logan Ryder is running out of time to stop a serial killer from claiming a fourth woman on Hawaii’s Big Island. Grief counselor Elena Kekona puts her life on the line to help when she discovers she resembles the victims. But Logan’s reserve—and Elena’s secrets—could turn their instant attraction into a devastating endgame that both might not survive…

I hope readers will enjoy the paradise setting of the Big Island of Hawaii, while also delving into a gripping crime thriller with lots of twists and a great ending.

I love crime thrillers and romantic suspense in that both can offer a thrill a minute, while also showing the softer side of the protagonists in finding romance in the midst of danger.

It contributes to the crime thriller and romantic suspense genres by blending a tropical paradise setting with a police procedural, using my background as a criminologist and true crime writer to give the plot verisimilitude.

In this book, I explore the intricacies of gender and genetics in relation to homicidal behavior and criminality.

In this book, it will enable readers to explore the wonders of the Big Island of Hawaii as a great tropical location for residents and tourists alike.

Books that left their mark on me include 84, Charing Cross Road, The Other Side of Midnight, The Maltese Falcon, A Woman of Substance, Valley of the Dolls, The Christmas Shoes, The Thorn Birds, and more.

As the only male author currently writing for the Harlequin Intrigue series, I have often been asked if I find it more challenging to write romantic suspense than its female authors? The answer I give is that no genre is gender-specific as it relates to one’s ability to master. Or, in other words, if you understand human nature and the dynamics of male-female conflicts and resolving these in a credible way while weaving a great crime story in romantic suspense fiction, then of course men are equally capable as women in delivering a gripping and satisfying tale for readers to enjoy.

R. Barri Flowers is an award-winning criminologist and bestselling author of more than one hundred books, including spinetingling crime, suspense, mystery, and legal thriller fiction, entertaining young adult mysteries, and riveting true crime books. He has also written a number of short stories and articles over a long writing career, including guest posts on Mystery Readers Journal, Write for Harlequin, and Killer Nashville Blog.

Barri is the editor of the acclaimed true crime anthology, Masters of True Crime: Chilling Stories of Murder and the Macabre, and co-editor of the mystery anthologies, Murder Past, Murder Present and Murder Here, Murder There. His mystery short story, “The Wrong End of a Gun,” was published in Seattle Noir. The author’s true crime bestseller, The Sex Slave Murders, was “selected as one of Suspense Magazine’s Best Books.”

As a proud graduate of Michigan State University, Barri is the recipient of the prestigious Wall of Fame Award from its renowned School of Criminal Justice, among other accolades. As a highly sought-after expert of violent criminality, victims, and offenders, the author has appeared on popular television crime investigative documentary series, such as the Biography Channel’s Crime Stories, Investigation Discovery’s Wicked Attraction, and Oxygen’s Snapped: Killer Couples.