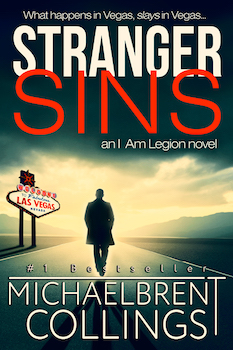 What happens in Vegas…slays in Vegas.

Legion is a teacher. An avenging angel. A murderer. A madman.

Raised in the underground hideout of an insane father, he now travels the world searching for those who torment the weak, who harm the innocent. He uncovers the secrets and sins of evildoers and teaches them how to leave those mistakes behind. Even if it means killing them to do it.

But this time, the tables have turned. The ghosts of Legion’s past have come for him; the victims of his madness have returned to torment and destroy him. Wounded, weak, near death: For the first time, Legion is not predator, but prey.

Now aided by a woman and her daughter—who have themselves been surviving in secret terror for a decade—he must survive long enough to battle his past, to destroy the ghosts that have come for his sanity and soul…and to kill all who would harm his new friends.

But Legion is a good teacher. So he will run. He will hide. And then, when the students are ready…he will teach. And his lessons are always murder.

CRITICAL PRAISE FOR COLLINGS’ OTHER WORK:

“Collings skillfully manipulates language to prolong the suspense and terror, evoking the dread of brutality and torture, and drawing readers into his study of privilege and desperation… [R]eaders who enjoy probing into depraved tendencies will appreciate this psychological slasher.” – Publishers Weekly

“Collings is a master.” – Scream Magazine

What attracts you to this book’s genre?
I love the fact that horror allows us to talk about big questions–who are we, what are we doing here, is there a purpose to all this?–in a way that is both interesting and approachable. You walk into a crowded room and ask, “Who believes in God?” and there’s a dead, uncomfortable silence. You walk in and regale them with the plot of The Exorcist, and you cut away that discomfort with the wonderful power of a story that, ultimately, talks about the same things that are hard to discuss outside the narrative framework. 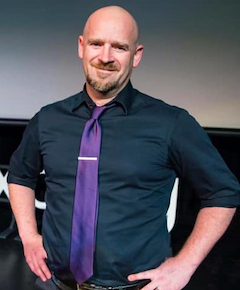 Was there anything new you discovered or that surprised you as you wrote this book?
Always. I’m coming up on fifty books, and every single one is a delight, a joy, a terror, a surprise. That is as it should be–why bother telling the same stale, tired stories over and over?

No spoilers, but what can you tell us about your book that we won’t find in the jacket copy or the PR material?
The series has shifted over the course of the first three books–Strangers was a straight-up survival horror story, which transitioned to mystery-thriller with Stranger Still and Stranger Danger (Books Two and Three of the I Am Legion series, respectively). This fourth entry has brought even more changes for the eponymous Legion and spins the character into a completely new direction.

Michaelbrent Collings is an internationally bestselling novelist, produced screenwriter, and speaker. Best known for horror (and voted one of the top 20 All-Time Greatest Horror Writers in a Ranker vote of nearly 20,000 readers), Collings has written bestselling thrillers, mysteries, sci-fi and fantasy titles, and even humor and non-fiction.

In addition to popular success, Michaelbrent has also received critical acclaim: He is the only person who has ever been a finalist for a Bram Stoker Award (twice), a Dragon Award (twice), and a RONE Award, and he and his work have been reviewed and/or featured on everything from Publishers Weekly to Scream Magazine to NPR. An engaging and entertaining speaker, he is also a frequent guest at comic cons and on writing podcasts like Six Figure Authors, The Creative Penn, Writing Excuses, and others and is a mental health advocate and TEDx speaker.