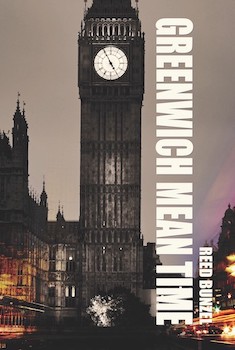 On assignment for Earth Illustrated magazine in Northern Pakistan, Monica Cross stumbles upon a deadly secret that makes her the target of a dark web outfit known as the Greenwich Global Group. As they dispatch a team of hired assassins to ensure she never makes it home to New York, Rōnin Phythian—once considered the most lethal man alive and long presumed dead—emerges from self-exile in his remote African camp and vows to save her life, while taking down the brutal hit squad for good.

At the same time, freelance blogger (and former Washington Post reporter) Carter Logan gets word that the wreckage of the airplane crash that killed his fiancée has finally been found and vows to bring justice for all those who died—and revenge to those who killed her.

Spanning ten time zones, nine countries, and four continents, GREENWICH MEAN TIME is a tightly spun thriller that plays out against a violent plot designed to change the course of history forever.

“A globe-spanning, mind-spinning thriller that will delight fans of Jason Bourne. Rōnin Phythian, an assassin with extraordinary powers and a code of his own, deserves a sequel. Make that sequels.” — Joseph Finder, New York Times bestselling author of House on Fire

Which took shape first: plot, character, or setting?
Without question, the character of Rōnin Phythian came to life long before I knew the plot or the setting of this book. Derived from the Japanese samurai without a lord or master, his mother selected the name after watching the film Harakiri, which she saw while she was pregnant with him. A freak accident when he was a young teen gave him an extrasensory skillset that eventually led him to become–at considerable effort and expense of various agencies–the most dangerous man in the world. 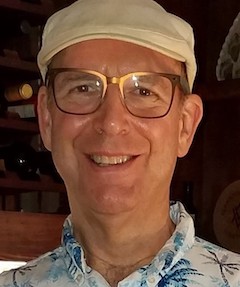 What attracts you to this book’s genre?
From the time I first discovered the works of Erle Stanley Gardner, Alistair MacLean, and Eric Ambler, I have been a huge fan of both mysteries and international thrillers. My first six novels all have been in the mystery genre, and I’ve taken great pleasure in writing them. However, I wanted to subject myself to a new challenge of creating a fast-paced story with multiple characters that was more of a fast-paced suspense adventure with a clock that keeps ticking faster and faster with every turn of the page.

What was the biggest challenge this book presented? What about the biggest opportunity?
I wrote the first draft of this book in 1994, and my agent at the time had great hopes for it. Then she passed away, and it sat on my shelf for 25 years before I re-read it and re-loved it. Back in the 1990s, I had to invent a lot of the digital technology that exists today, and I found that my imagination had been eerily accurate. But I was challenged by political events that had shaped our world in ways that I had not envisioned, so I needed to retool a lot of the backstory and create new characters that played into the issues of today.

Was there anything new you discovered or that surprised you as you wrote this book?
This won’t be a surprise to most writers, but I continue to be amazed at how characters who appear to be dynamic in an outline manifest themselves as real people when they spill out onto the printed page–or computer screen. I can always trust them to take on lives of their own, and they provide themselves with odd traits and nuances that appear as if from some sort of “mental ether” and become real people.

No spoilers, but what can you tell us about your book that we won’t find in the jacket copy or the PR material?
As my agent pointed out the first time she read GREENWICH MEAN TIME, “there’s a lot of bad people in this book.” She meant that as a compliment, and that’s how I took it. When one is dealing with assassins, corrupt politicians, dark web entities, and all of the Seven Deadly Sins, there’s not a lot of room for “nice.” Even Rōnin Phythian, the main character, carries baggage from his days in the dark, slimy underbelly of contract killing. As the main heroine, Monica Cross, quickly finds out, one never knows who to trust and whether the person standing next to you is there to kill you.

What authors or books have influenced your career as a writer, and why?
Franklin W. Dixon and Erle Stanley Gardner, of course. William Faulkner, no question. Later, in no particular order: T. Jefferson Parker, Michael Connelly, James Lee Burke, Dennis Lehane, John le Carre, Alistair MacLean, Robert Ludlum, Bill Granger, Eric Ambler. And a fellow I got to know for a short time before his death, Trevanian. All of them brought a cutting edge to storytelling, character development, pacing, subtle nuancing, and tightening of plot.

How critical is the art of discipline to the completion of a book?
No matter what stage your writing career is in–first novel, three or four books in, or fifteen or twenty under your belt–your career as a writer WILL NOT HAPPEN if you don’t have some sort of strict structure and personal discipline in place. That means writing (or editing) every day, for a set time. As with all of my books, GREENWICH MEAN TIME went through 10 to 12 drafts, each of which took weeks, if not months. You must make a commitment to seeing the project through, much like a parent makes a commitment to raising his or her children.

Reed Bunzel is the author of a half dozen crime novels and thrillers, as well as several nonfiction books. He also is the editor and publisher of BunzelGram, a weekly newsletter that focuses on mysteries and thrillers both in print and on the screen.

Earlier in his career, he was editor-in-chief of Streamline Publishing’s Radio Ink and Streaming magazines, as well as an editor at Radio & Records and Broadcasting magazine. Additionally, he served in an executive capacity at both the National Association of Broadcasters and the Radio Advertising Bureau.