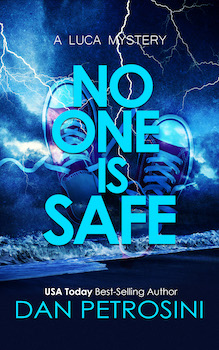 When the first girl goes missing…

…his initial lead is the perfect lie.

Is this a grand cover-up or a rush to judgment?

With 20 years on the force, Detective Luca has seen much. A rape case and a missing girl investigation land on his desk. Both cases have brought more questions than answers. The rapist has remained at large, but he’s sure they can track him down. The real mystery lies with the missing teenage girl.

Dan Petrosini recently spent some time with The Big Thrill discussing his latest thriller, NO ONE IS SAFE.

Which took shape first: plot, character, or setting?
As this is the 15th book in the Luca Mystery Series, the main characters are familiar. The plot took shape, though it evolved. 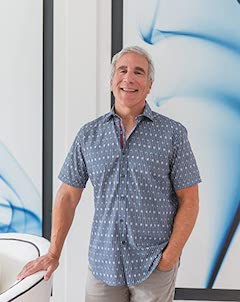 What attracts you to this book’s genre?
I’ve always been drawn to mysteries and crimes where it’s impossible to guess the killer.

Was there anything new you discovered or that surprised you as you wrote this book?
With the research required for every book, you go down many rabbit holes. As a curious individual, this often leads to gaining knowledge on subjects tangential to the plot. Most of what you learn doesn’t make it into the book. One thing I took away was the depressingly high percentage of teenagers in abusive relationships.

Dan is a USA Today and Amazon best-selling author who wrote his first story at the age of ten and enjoys telling a story or joke. Dan gets his story ideas by exploring the question What if?

In almost every situation he finds himself in, Dan explores what if this or that happened? What if this person died or did something unusual or illegal? Dan’s non-stop mind spin provides him with plenty of material to weave into interesting stories.

A fan of books and films that have twists and are difficult to predict, Dan crafts his stories to prevent readers from guessing correctly. He writes every day, forcing the words out when necessary and has written over twenty-five novels to date.

It’s not a matter of wanting to write; Dan simply has to. He passionately believes people can realize their dreams if they focus and act, and he encourages just that. His favorite saying is “The price of discipline is always less than the cost of regret.”

Dan reminds people to get the negativity out of their lives. He believes it is contagious and advises people to steer clear of negative people. He knows having a true, positive mindset makes it feel like life is rigged in your favor. When he gets off base, he tells himself, “You can’t have a good day with a bad attitude.”

Married with two daughters and a needy Maltese, Dan lives in Southwest Florida. A New York native, Dan has taught at local colleges, writes novels, and plays tenor saxophone in several jazz bands. He also drinks way too much wine and never, ever takes himself too seriously.