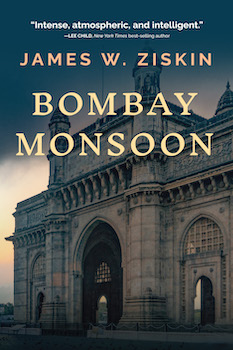 The year is 1975. Danny Jacobs is an ambitious young American journalist who’s just arrived in Bombay for a new assignment. He’s soon caught up in the chaos of Prime Minister Indira Gandhi’s domestic “Emergency.”

“The Emergency,” a virtual coup by the prime minister, is only the first twist in the high-stakes drama of Danny’s new life in India. The assassination of a police officer by a Marxist extremist, as well as Danny’s obsession with the inscrutable Sushmita, conspire to put his career—and life—in jeopardy. And, of course, the temptations of Willy Smets’s seductive personality sit squarely at the heart of the matter.

“A stunning novel! BOMBAY MONSOON, captivating from the very first pages, draws us into an exotic world of intrigue and passion, offering up a whipsawing plot and a truly memorable cast. There’s more than a little Graham Greene here, along with a dash of le Carré, though this story is pure Ziskin, told in his unique and resonant voice.” —Jeffery Deaver, New York Times bestselling author

The setting. I have long wanted to write a story set during the Emergency in 1975 India. Its parallels to today’s threats to democracy are striking. 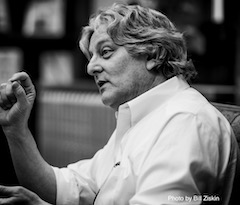 I enjoy stories that plunge ordinary people into extraordinary situations. I tried to write BOMBAY MONSOON as a thriller in the tradition of the great 1970s suspense novels.

Research, without a doubt. While I’m extremely familiar with India—having spent nearly four years there working and traveling—I needed to do extensive research on the Emergency (1975-77) and the India of that era.

Indira Gandhi’s determination to retain power struck me as eerily similar to what took place in this country after the 2020 election. Mrs. Gandhi succeeded in suppressing democracy, while Donald Trump narrowly failed. It served as a lesson to me. We must be vigilant if our democracy is to survive.

Graham Greene meets Gatsby on the Subcontinent. Democracy is fragile and the lines of loyalty and betrayal often cross and cannot be untangled.

Too many to name, but I’ll give it a go.

Frederick Forsyth. For me, his irresistible books set the standard for 1970s thrillers.

Where exactly does obsession begin and loyalty end?

The answer is in the book.

James W. Ziskin is the Anthony, Barry, and Macavity Award-winning author of the Ellie Stone mysteries. His novels and short stories have been shortlisted more than twenty times for prestigious industry awards, including for multiple Edgar, Anthony, Barry, Lefty, and Macavity awards. BOMBAY MONSOON is the first thriller in a new series set in 1975 India. Ziskin lived and worked in India for four years and now lives in Massachusetts.