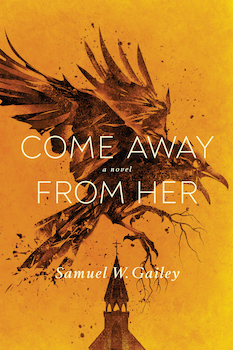 Tess, a deaf woman fleeing from unspeakable acts, seeks shelter in a rural Pennsylvania town, setting into motion a chain of events fueled by secrets from her past. Her presence upsets the status quo for the townspeople, none more so than for Cap, the local church pastor, whose life has been marred by shame and tragedy. Shortly after Tess’ arrival, Cap discovers a dead body outside the church, and life as the town knows it is forever changed.

The victim’s identity is concealed until the climactic end of the story, but everyone in town, including Cap, has a motive. There is Maggie, an unmoored woman who numbs reality with pharmaceuticals and strange crimes; Wade, whose philandering ways are town gossip; Butch, a teenager struggling with his identity; and Robin, a young mother desperate for a way out of her marriage to Chuck, a violent man driven by ignorance and self-loathing.

“In Samuel W. Gailey’s COME AWAY FROM HER, there is a murder. But that’s not the point of this beautifully written story. At the heart of the novel is an important question: How do we heal from the wounds of our past? Gailey offers a cast of characters so perfectly human in their frailties that we can’t help but feel for them deeply as they struggle toward forgiveness. Seldom does a book come along as lovely, poignant, and compelling as this one.” —William Kent Krueger, The New York Times bestselling author of This Tender Land and Ordinary Grace

“Sharp and unsettling, COME AWAY FROM HER peels back the layers of deceit in a small town with plenty of darkness to hide…The climactic reveal feels both shocking and inevitable in this tense and vividly drawn read.” —Sarah Stewart Taylor, author of The Maggie D’arcy series

“In COME AWAY FROM HER, Samuel W. Gailey sustains the tension at such a pitch that it’s hard to look away for even a second. Gailey’s prose is muscular and melodic; his characters are full of humanity. This book hits like a thunderbolt.” —William Boyle, Shoot the Moonlight Out, City of Margins

Samuel W. Gailey recently spent some time with The Big Thrill discussing his latest thriller, COME AWAY FROM HER.

Which took shape first: plot, character, or setting?
Character and setting go hand in hand in my process. All of my novels take place in rural Pennsylvania, where the winters are hard and the townspeople even harder. And at the center of this story, I envisioned a pastor grappling with both his faith and addiction, only to discover redemption with the help of the unlikeliest of people—an outsider to the small community. 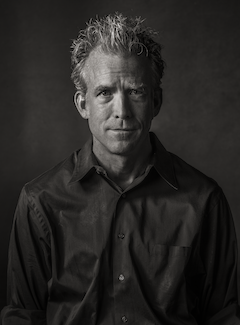 What was the biggest challenge this book presented? What about the biggest opportunity?
The challenge in the book became its best opportunity. Tess, my female protagonist, is deaf. At the beginning of the story, I wanted to find a unique way to demonstrate Tess’s loss of power and how little voice she has in the acts of violence that are committed against her. At the same time, I wanted to take what can be perceived as a weakness or flaw and show how it actually makes Tess special and empowers her. Before making her deaf and mute, I struggled with her needs versus wants, her backstory, her physicality, and her voice. How she actually spoke and the things she might say. Once I removed her literal voice, she blossomed into a character with grit and tremendous inner strength. Silence became her power.

Was there anything new you discovered or that surprised you as you wrote this book?
Crows hold funerals for their dead and when mating, they often stay together for life, separating only at death.

What authors or books have influenced your career as a writer, and why?
Larry Brown, in my opinion, is the king of Grit Lit. His writing is poignant, powerful, violent, and real. Many compare Brown to William Faulkner, and I wouldn’t disagree. Brown’s ‘Joe’ and ‘Father and Son’ walk the tightrope over destruction and violence and compassion and compulsion. The characters are riveting, their stories raw and often festering. After reading these two books, I understood that there were different ways to tell a story. Different ways to write a story. And there are different and sometimes difficult stories to tell.

Samuel W. Gailey was raised in a small town in northeast Pennsylvania (population 379) and now resides on remote Orcas Island in the Pacific Northwest. His writing has been compared to Steinbeck and Cormac McCarthy and praised by The NY Times, Kirkus, and Esquire. Gailey’s novels are intriguing studies of human nature and portray how the simplest twist of fate can alter and shatter lives.