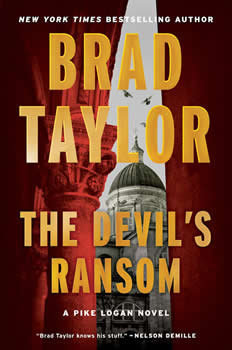 As Brad Taylor’s THE DEVIL’S RANSOM opens, Pike Logan and his team are in Tajikistan on a routine cover-development archeological trip when they learn about the fall of Afghanistan. A man who has helped the United States more than anyone else in that war-torn country has managed to escape to the Tajik capital, Dushanbe, along with an Afghan government official, who has brought with him a national treasure known as the Bactrian. Pike and crew are ordered to extract the man and bring him to safety, but they run up against a huge ransomware attack that takes down the computer systems of every covert company in the Taskforce.

Little do they know, the attack is only a dress rehearsal for a much bigger conspiracy fueled by a traitor within the US government. Cloaked behind sophisticated hackers from Serbia and Russia, the turncoat aims to restart the Cold War by taking down a major symbol of US national pride. If Pike and his team can’t stop him, many innocent lives will be lost, and the balance of world power will never be the same.

“The plot of this book came from research I was conducting about the Israeli company NRO and its Pegasus malware surveillance tool,” Taylor says. “I learned the UAE was using the tool to keep track of journalists, dissidents, and even US citizens. Bad enough, but the men actually using the tool on behalf of the UAE were United States ex-intelligence personnel working for something called Project Raven. While NRO claims they only license Pegasus to vetted nation-states, the tool is scary in its ability to be misused, and the fact that former US intel operatives were executing the action became a germ of a story. As I conducted the research on malware in general, learning about zero-click and cyber vulnerabilities, I hit on the massive and growing problem of ransomware. In the last couple of years, ransomware gangs have shut down our pipelines, taken the world’s largest supplier of meat offline on two different continents, held numerous hospitals hostage, and literally caused the entire country of Costa Rica to grind to a halt. The groups are all shadowy, and it’s impossible to determine if they’re operating on their own or being bankrolled by another nation-state. In the end, it was a better story, so I went that way with THE DEVIL’S RANSOM.”

But how did the fall of Afghanistan figure into the story? 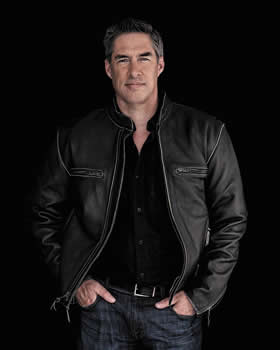 “Early on, my publisher asked if I was going to touch on Afghanistan, and I said, ‘No way,’ because the ending of that war was a little raw for me,” Taylor says. “Then I read a story about the Bactrian Treasure being lost and the new Taliban owners hopping mad about losing it, and that was just enough to get my creative juices flowing. The Bactrian Treasure is real and was discovered by a Soviet archeologist in the upper steppes of Afghanistan in the late ’70s. It was a unique find because tombs in that area held treasures from across the Silk Road, spanning the globe, from Serbian daggers to Chinese emeralds. Nobody knows who the people were in the tombs, but it was a big find. When the Soviets left Afghanistan, the treasure disappeared. Nobody knew what had happened to it. It was thought the Soviets had simply stolen it on the way out the door. Fast-forward to 2001, after we toppled the Taliban, and a guy produced a key to a safe underneath the main bank in Kabul. He’d hidden the treasure and kept it secret all those years. Fast-forward again to the present day, and the treasure was lost again, with the Taliban swearing vengeance to find it. That was enough to get me to incorporate Afghanistan into the story.”

THE DEVIL’S RANSOM is Taylor’s 17th Pike Logan thriller. What continues to inspire him? “Fiction is an escape from the everyday, allowing the reader to enter worlds they wouldn’t otherwise experience, which is what enthralls me,” he says. “I don’t think I’m unique in that thought, as it’s probably why anyone reads fiction. I’ve always been a voracious reader, and I always had it in the back of my head that one day I’d write a book. There was no single lightning bolt of inspiration; it was simply a ‘bucket list’ type of thing. I never thought I would be published; it was just something I wanted to do. I thought my first book, One Rough Man, would simply sit on the bedside table with my mom saying, ‘Great book!’ That would have been enough.”

On a ferry to Hvar, Croatia, finishing THE DEVIL’S RANSOM, Taylor asks the DCOE (Deputy Commander of Everything), “What do you think of this?”

Of course, Taylor’s path to publishing took a few detours along the way—all of which serve to inform his work. The retired Army lieutenant colonel’s military experience comes through in his taut and technologically detailed writing. “Nothing I write is a direct reflection of military operations I’ve been involved in, because most of those are still classified, but I do try to infuse the books with the ethos of the men I served with, to include the murky world of actual combat,” Taylor says. “In Hollywood, too often the hero is always right, no matter what he decides, but that’s not how combat works. The world isn’t black and white. Sometimes, you make a ‘right’ decision in combat, and it ends up badly—and you live with that for the rest of your life. In real life, warfare is a moral quandary with no black and white answers. I try to put that complexity on the page through my characters. As for whether my characters are inspired by real life—yes, of course they are. I’d venture to say every single character written by any author is inspired by real life.” 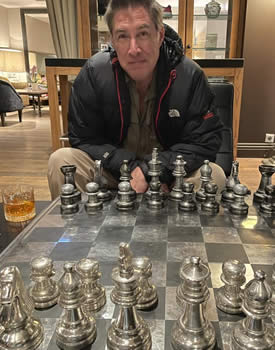 Taylor challenges the DCOE to a chess match during a recent research trip in Helsinki, Finland. He lost.

Pike’s wife, Jennifer, continues to be an integral part of the series. “She is the yin to his yang,” Taylor says. “Early in the series, she was Pike’s moral compass, because his had become broken. They’ve both grown as the series has progressed. She has become more in tune to the nuances of the world of national security and less black and white, while Pike has started to regain his compass.”

In this story, the hacker Branko inspires a bit of sympathy, because his ruthless Russian handlers are after him. Was that what Taylor intended? “Yes, that’s exactly what I intended,” he says. “In the real world, there is no ‘Dr. Evil’ proclaiming he wants ‘One MILLION dollars.’ I’ve sat across the table from a few terrorists, and they always thought they were the good guys. In their mind, I was the bad guy, and I try to capture that belief system on the page. Very few people in the world are doing operations against our national interest purely because of evil intent. There’s always something more. In this case, Branko is just trying to make a living, but he still has some semblance of a moral code—as weak as it is. I wanted to capture how that person would think and what he would do when he realized he was in over his head.”

In Memphis on book tour for 2022’s End of Days, Taylor (right) and Mark Greaney discuss their latest novels.

As with all the Pike Logan books, Taylor does a ton of research to prepare. “First, of course, I had to understand the world of ransomware and the criminal gangs/nation-states that employ it. From there, it was on-the-ground research, where my wife and I flew to Croatia, rented a car, and drove the length of the country, starting in Zagreb and ending in Dubrovnik, hitting every small town along the way. When you read about Pike or Jennifer having an issue in some small town in Croatia, it’s because I planted my boots in that small town and had the same issue.”

Taylor shares the stage with fellow ITW authors at ThrillerFest.

Taylor’s writing process begins with mentally creating the story. “If I’m walking my dog, taking a shower, working out, you name it, I’m writing. I used to follow a script dictated by Google. For example, ‘How many words should I get out in a day as an author?’ but I found that that didn’t work for me. Some days I’ll not type a single thing. Weeks, actually, because the story hasn’t coalesced in my head yet. I found that if I forced it, because I needed to hit a ‘magic number’ each day, that I inevitably hated it and would end up hitting delete. I’ve since become comfortable not typing until I’m ready—which is a little scary, because in the back of my head, I’m thinking, ‘Are you EVER going to be ready?’ So far it’s worked out. My record is 8,000 words a day for four days on a security contract. I don’t recommend that at all. But sometimes a deadline is a pretty good motivator.”

Speaking of which, Taylor is hard at work on his next thriller. “I just returned from a book research trip to Denmark, Sweden, Finland, and Estonia and am currently banging away on Book 18. More to come.”