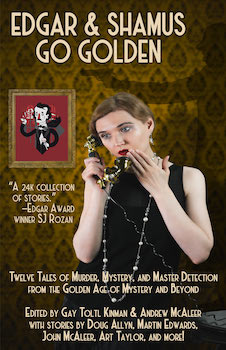 As if picking up where Sir Arthur Conan Doyle, Dame Agatha Christie, and Dorothy Sayers left off, the who-dun-it, why-dun-it, how-dun-it, and unshakable alibi are all afoot in Edgar and Shamus. Travel back in time with an all-star cast of some today’s leading experts in the art of crime fiction.

“EDGAR AND SHAMUS GO GOLDEN is a 24-carat collection of stories by the best in the business, proving that we are in a new Golden Age ourselves, and lucky to be here.” —SJ Rozan, Edgar Award winner and bestselling author of Family Business

“EDGAR AND SHAMUS GO GOLDEN is a must-read. Editors Gay Toltl Kinman and Andrew McAleer assembled a collection of stories that fit together like the songs on a Beatles album, with one story setting up the next. Each piece captures the Golden Age glow the editors promised. I highly recommend it.” —Tom MacDonald, Shamus Award-nominated author of the Dermot Sparhawk P.I. series

“The Golden Age of Mystery will continue for as long as writers produce stories that challenge us to find solutions alongside the detectives. These stories in EDGAR AND SHAMUS GO GOLDEN—some of the best of the best—offer definitive proof.” —Stephen D. Rogers, Derringer Award-winning author of Shot to Death

Interestingly, the Edgar and Shamus concept sort of took shape all at once. A short mystery story written by Edgar winner John McAleer in 1937, “The Case of the Illustrious Banker,” was recently discovered some 80 years after first penned. McAleer not only wrote the story in the Golden Age of Mystery tradition but during the actual Golden Age. The idea of an anthology tribute dedicated to Golden Age mystery stories by Edgar and Shamus winners was too good to pass up for the volume’s editors Gay Toltl Kinman and Andrew McAleer. The publisher Down & Out Books was instantly sold on the idea.

Readers all over the world continue to enjoy a good, satisfying mystery. In Edgar and Shamus, readers get twelve original mysteries for the price of one book! Plus, the stories are all written by Edgar and Shamus award winners, so readers know they are getting the best of the best.

The biggest challenge was selecting authors. Once authors realized that one of our primary goals was to help preserve the historical importance the Golden Age has had on the mystery genre, so many authors generously agreed to contribute a story. We wanted to keep the invite open but had to limit the volume to 12 stories.

Was there anything new you discovered or that surprised you as you put this book together?

The generosity of authors overwhelmed us. The contributors to Edgar and Shamus are literally the best in the field. The Edgar and Shamus contributors were so willing to help in order to contribute to the history of the genre. Writing short stories might be the hardest thing in this business, and we have a dozen authors who stepped up and did a masterful job.

The suspense and puzzling solutions can be found only in reading the stories, which we are convinced will survive the test of re-reading…

Why pay tribute to the Golden Age of Mystery?

The authors from the Golden Age elevated crime fiction to a new level. They helped make it acceptable for all classes to read and enjoy crime fiction. Kings, presidents, and factory workers could all be on equal footing in the world of crime literature. This is still true today thanks to the diverse and creative authors in the field.

What was the most important criteria in your selection process?

We wanted traditional mystery stories. Puzzles, who-dun-its, how-dun-its, unshakable alibis. So long as the stories were retro and had a Golden Age theme.

We co-edited the book together, and perhaps the most challenging part was that we love many of the same mystery authors, so we kept coming up with new authors we wanted to invite. Whittling down the list was not easy, but we couldn’t be happier with the authors and stories in Edgar and Shamus.

GAY TOLTL KINMAN has nine award nominations for her writing. She has published several short stories in American and English magazines and numerous anthologies, including Coast to Coast Private Eyes, Michael Connelly’s Murder in Vegas; children’s books; a YA gothic novel; adult mysteries, and other collections of short stories. Several of her short plays were produced—now in a collection of twenty plays, The Play’s the Thing. Ms. Kinman has published many articles in professional journals, newspapers, and books, including the Mystery Writers of America’s How to Write a Mystery; and has co-edited two nonfiction books. For the Private Eye Writers of America Shamus Awards, Ms. Kinman has served as a judge on all the committees, then chair of each. She also served as the overall chair of the Shamus Awards for several years. For the Mystery Writers of America Edgar Awards, she has served as a judge for the Best Young Adult Mystery committee; then chair of the Best Juvenile Mystery, and the presenter to the winner of that category at the annual Awards Banquet. Ms. Kinman has library and law degrees and had the honor of interviewing literary luminaries such as Sara Paretsky, Marcia Muller, and Joseph Wambaugh.

ANDREW MCALEER is the author of the 101 Habits of Highly Successful Novelists, Mystery Writing in a Nutshell (co-authored with Edgar winner John McAleer), Positive Results, and Fatal Deeds. For many years he had the honor of co-editing with Shamus Award-winner Paul D. Marks the Coast to Coast crime fiction series (Down & Out Books). Past president of the Boston Authors Club, Mr. McAleer teaches at Boston Col-lege and is a winner of the Speckled Band of Boston’s Sherlock Holmes Bowl Award. He works full-time as a police officer and served in Afghanistan as a US Army historian. Visit him at: AMcaleer.com.