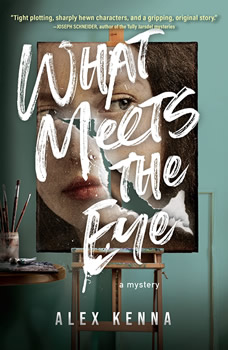 Kate Myles was a promising Los Angeles police detective until an accident and opioid addiction blew up her family and destroyed her career. Struggling to rebuild her life, Kate decides to try her hand at private detective work—but she gets much more than she bargained for when she takes on the case of a celebrated painter found dead in a downtown loft.

When Margot Starling’s body was found, the cause of death was assumed to be suicide. Despite her beauty, talent, and fame, she struggled with a host of demons. But as Kate digs deeper, she learns that Margot had a growing list of powerful enemies—among them a shady art dealer who had been selling forged works by Margot. Kate soon uncovers a dirty trail that leads straight into the heart of the city’s deadly underworld.

Margot died for her art—and if Kate doesn’t tread lightly, she could be the next to get brushed out.

Author Alex Kenna spent some time with The Big Thrill discussing her debut mystery, WHAT MEETS THE EYE: 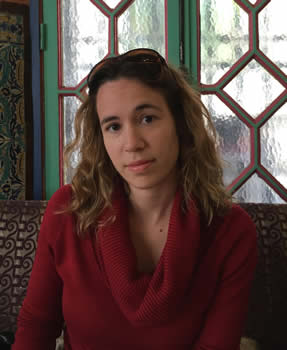 While writing this book, I did a lot of research into art forgers and learned about many fascinating characters. My favorite was Han Van Meegeren, who sold fake Vermeers to the Nazis. After the war, he was accused of treason for giving away national treasures and had to paint a brand new “Vermeer” for the court to exonerate himself.

I’ve always had a penchant for the dark side. I like true crime, I sing murder ballads to my baby, I own several manuals on poisoning. Murder mysteries are a natural fit. I have also practiced criminal law for almost a decade, so I’m very comfortable writing about crime.

Writing about contemporary art and the artistic process was both a challenge and an opportunity. As a painter and former art student, I wanted to capture the sense of euphoria that comes from slathering color on raw canvas. I also wanted to talk about some of the issues in the contemporary art world: the misogyny, the snobbism, the out-of-control speculation. At the same time, I wanted Margot to be a well-rounded character and not just a stereotype. Writing about her artwork was especially tricky because it had to be both conceptually interesting and cynically affected by market forces.

I definitely conceived of Margot and Kate first, and the plot flowed from there. For Kate, I wanted to write a woman who had a lot of the imperfections that male characters are routinely forgiven for: addiction, flaming ADD, self-loathing, flawed parenting. Margot presented her own challenges because she’s full of contradictions. She’s an opportunist and a bit of a sadist but also someone with a strong sense of justice. I had a lot of fun writing her.

Alex Kenna is a lawyer, writer, and amateur painter based in Los Angeles. Before law school, Alex studied painting and art history. She also worked as a freelance art critic and culture writer. Originally from Washington, DC, Alex lives in Los Angeles with her husband, son, and giant schnauzer, Zelda. When she’s not writing, Alex can be found nerding out in art museums, toddler wrangling, and playing string instruments badly. Alex’s debut novel, WHAT MEETS THE EYE, is available for pre-order and will be released December 6, 2022.

To learn more about Alex and her work, please visit her website.