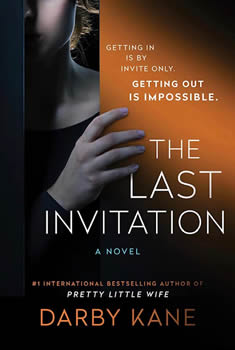 Divorces are messy—and in Darby Kane’s new novel, THE LAST INVITATION, Jessa Hall is caught in a real doozy. She’s the guardian ad litem—a specially appointed lawyer—for a child being pulled between a violent man from a powerful family and his abused, soon-to-be-ex-wife. Jessa, being too good at her job, is warned to withdraw from the case or face dangerous consequences, but she is tired of the men from rich and powerful families walking all over the women they once loved, and she refuses to abandon this child.

But suddenly her life is turned upside down. Accusations of ethics violations are made, her job is in jeopardy, her boyfriend dumps her, she loses her home. Life as she has known it is over.

Until an invitation arrives from her law school mentor inviting her to join a secret group lurking in the Maryland suburbs of Washington, DC, whose mission it is to ensure that justice is served upon powerful men who hurt women and children. Members are carefully vetted, invitations are rare, and invisibility is their most powerful weapon.

Jessa is surprised and tempted. The goals of the group seem admirable, even noble. But then Gabby, an old frenemy from law school, approaches Jessa with suspicions about the group’s role in the death of Gabby’s ex-husband. Just as Jessa thinks she can push beyond Gabby’s concerns, people start dying—and Jessa must work with the last person in the world she wants to trust to find out what’s really going on.

The Big Thrill was fortunate to sit down with Darby Kane to talk about her roots in law, flipping between writing romance novels and murder stories, and how women aren’t always nice.

Like Jessa, you were a lawyer in DC and have been a guardian ad litem for kids caught in the middle of nasty divorces. I can only imagine how much emotion a GAL gets thrown at them. How did you use that energy to help shape the emotional tension in THE LAST INVITATION?

My now-husband went to American University for law school, and then I went to law school, and I worked in Rockville. We lived in Cabin John, Maryland, for 14 years. I was a custody specialist. I represented moms and dads, and then I would get appointed by the court to represent the kids [as the guardian ad litem]. If you think about it, if the court has to appoint an attorney for your kid because they think your kid’s best interests aren’t being looked at, imagine how bad those divorces are.

You always feel like you’re making a wrong move in that kind of job because the stakes are so high. You’re stepping into somebody’s life for a couple months, and then it’s on you to make this huge recommendation report about what happens with their kids. It’s already a tense situation. I wanted that [high-stakes tension] to be something that was happening for Jessica.

I also wanted this book to be about a failing judicial system. There’s an economic imbalance that creates a power imbalance. It is a system we all know if you watch any kind of court case or follow anything in the news. It’s a system that sometimes feels like “he who has the biggest bank account wins.”

The law firm in THE LAST INVITATION is an exaggerated version of a powerful law firm, and it’s not how the law firm I worked at felt. I think that’s in the acknowledgement page, but let me be clear, I love the law firm I work for. But it is very high pressure when you are representing people that are powerful.

One of Jessa’s more redeeming qualities is the fact that she is absolutely committed to being a staunch advocate for a child who does not have a voice of their own. Jessa makes some interesting moral choices, but she’s committed to being this child’s voice, and she’s not about to back away from that for anybody. She pays the price for it, and that’s what lands her in this mess.

But you know, you kind of admire how she got there. I actually loved all of these women. What I loved about writing Jessa is she’s a fighter. She might not fight the way you want, she might not fight the way that’s on your morality scale, but she [doesn’t give up]. When she loses [what she’s worked for], she looks to this group because it’s one more way of fighting to keep what she has, and you have to admire that piece of a person.

Jessa and Gabby (the other hero in your story) hate each other, but their relationship is much more complex than an old grudge between law school classmates. They come together—unwillingly—to fight a much larger power than themselves. How difficult was it to write an investigative partnership that walks the knife’s edge between cooperation and discord like theirs? And how did they get to this point of being willing to bury the hatchet? 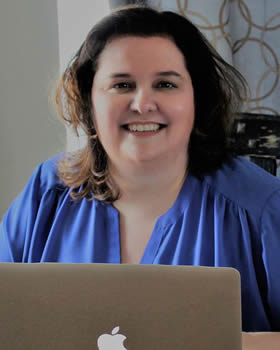 First, I love the idea of the reluctant partnership. Second, I’ve hit the age where you start kind of doing a self-assessment about the people in your life, [about friendships] I’ve held on to for nostalgia, or whatever reason you hold on to the friendship. I think we all go through this at some point when you start to say, “Okay, this isn’t working.”

I wanted to play with that because that’s really what happened. In law school, they had this unequal friendship where Gabby thought they were closer than Jessa did, and Jessa jettisoned Gabby in a way that only 20-somethings could do. Now they’re thrown together into a dangerous situation where the only two people that have a possibility of figuring this out and getting out of it are these two, so they have no choice but to work together.

So every feeling that Gabby ever had that she didn’t work through is still right there, and an awful thing happens to her. In the first scene, she finds her ex-husband dead. She thinks he’s been murdered, and everybody else says suicide. It’s easier, rather than dealing with everything that’s going on with her, to lash out at Jessa.

In some ways, Gabby is the moral center of the book. There’s a group of powerful women who have decided they get to be judge and jury, they get to decide who lives and who dies, and they’re unapologetic about it. There’s collateral damage, and the answer is … to move forward. And I think she, more than Jessa, was unwilling to be collateral damage.

This book has many feminist themes. There’s conflict between Gabby and Jessa because Gabby “threw away” her law career to get married and have a child. The women in the group are vigilantes manipulating the system on behalf of women who can’t fight back. Most of the men in the book treat women as disposable. What is your book saying about what the roles of women in society should be as opposed to the current reality?

Booklist described THE LAST INVITATION as “Me Too” meets The Firm, and I was like, “That’s it exactly.” I don’t want to get political here, but starting in 2016, my anger ratcheted up. And I think a lot of women are angry, and they want [the system] to be different. But they know that the way the system is set up, it’s not that easy for it to be a different way.

I wrote THE LAST INVITATION during a time where I was becoming, frankly, more and more frustrated about what was happening in the United States. There was a series of cases, and one of them was the Brock Turner case. His defense was saying he can’t go to jail because it’ll ruin his future. And when I had heard the “Oh, the poor rapist will have a hard life now,” drumbeat, I got more and more furious. It felt like women were losing more of their place in society. So I wrote this book basically saying women have had enough.

It must have felt so cathartic for you to write characters who were able to solve these problems that the legal system is almost inherently insulated against solving.

If you think about it, it’s a [legal] system that’s really set up to solve concrete issues. How many widgets were you supposed to deliver on May 1st? Your contract says you’re supposed to give X number of widgets, and you didn’t. That’s what [the legal system] is for.

It’s the person-to-person piece that’s difficult. You did X, so now what is the punishment for that? The law isn’t set up for the emotional battle between human beings and the wrongs that we do to each other. As a result, how do we divide everything we own and everything we ever cared about? It doesn’t know how to handle that. We have an imperfect system.

That’s part of why Retta the judge is who she is. She’s somebody who is right there on the front lines, seeing [the real world] in her courtroom and armed with whatever limited ability the legislature has given her to act, and she can’t figure out a way to make things better.

Part of the point of THE LAST INVITATION it that somebody so powerful with that many resources couldn’t save a person that she loved from something awful happening.  Until she decides to set up an alternate system of justice. A vigilante system. And it’s scary because sometimes it seems that’s the only way [justice] is going to happen.

Darby Kane is a pen name for you. You also write romances as HelenKay Dimon. How did you move from writing romances to thriller novels?

While I was an attorney, another attorney in my office handed me some romances and said, “There is nothing happy about what you do for a living, you need to read these.”  And I fell in love. There’s a hope that comes within romances that no matter what happened there was still this light where they found each other.

But I’ve always loved thrillers. That’s what my mother reads, and that’s what I read growing up. So as HelenKay I write romantic suspense. I love the romance and the danger that comes with throwing people into a kind of high energy, high volatility, high emotion situation and having them both resolve something dangerous and actually fall for each other.

[But during the pandemic] I’m getting angrier and more frustrated. I told my romance editor at Avon that I wanted to write a thriller. And she said, “Well, let’s give it a shot.” And that’s the book that ended up being Pretty Little Wife.

What’s next for Darby Kane?

I [HelenKay Dimon] have a book coming out in April 2023 called Morewood Family Rules, which is not in the traditional romance genre. It about this family of con artists—it’s this family of shenanigans. It was great fun to write. It’s a much different tone. It’s lighter, it’s funny, it has some romance in it.

Next for Darby Kane, I’m writing a book right now which is tentatively called The Engagement Party, which is a locked-in-a-house thriller that will be out probably next November or December.