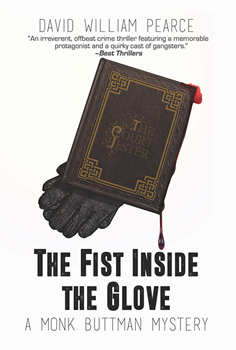 Reasonably comfortable with his possession of wealth, Monk moseys through his days taking care of his grandkids. After a car accident takes out his beloved Falcon and leaves him injured, he begins to see that many of the people around him are on edge. His wife, Agnes, no longer has a job and is working through parental issues with her father.

Meanwhile, a book given to him in jest may in fact be a primer for the disaffected rich to move the country away from democracy to autocracy by whatever means, including violence. Monk thinks this is silly until people connected to the book start dying. Foolishly drawn into this scheme, along with Agnes’ sudden interest in sleuthing, Monk finds that they are now targets themselves and decide to play along to learn more, even if it leads them to their possible demise.

The Big Thrill caught up to author David William Pearce for an in-depth discussion about his latest Monk Buttman mystery, THE FIST INSIDE THE GLOVE:

You can deal with anything, whether it’s personal, political, religious, or romantic, because human frailty plies its way through everything we do. And we’re fascinated by the violence that we perpetrate through those frailties.

I wanted to change the tone from the previous books in the series without changing the natures of the main characters, Monk and Agnes. There are many different ways in which mysteries and crime novels can be told, and I wanted to explore that. 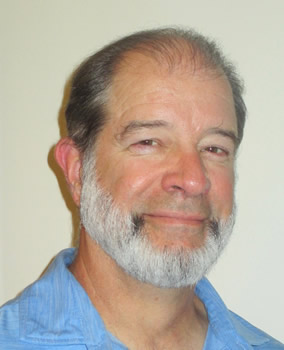 Probably the setting. As he navigates all the changes in his life, now that he has money and position, Monk has to deal with situations that didn’t come up when he was a broke nobody.

How much I enjoyed writing it. I wanted it to have a little more humor, more like a Nick and Nora kind of story with a lot of interplay between Monk and Agnes.

I like to talk about the big issues of our time by bringing it down to the characters in the story and how they react to it with humor and just trying to survive.

In the crime genre, it has to be Walter Mosley and how he puts characters and series together. I’m also a big fan of many of the greats from Chandler and Jackson for how they set the mood of their stories and bring their times to life. I would also include Joseph Heller for his sense of humor and the absurdity of life.

Is it a good thing that we confer so much power to wealth?

To me, wealth is terribly corrupting, so I don’t believe it is. Some of that may be because I’m not wealthy.

An engineer for 40 years, Mr. Pearce, following open-heart surgery, decided to pursue his muse and write. He is the author of the Monk Buttman Mystery series. When not writing, Mr. Pearce is the accomplished recording artist Mr. Primitive. He and his wife live in Kenmore, Washington.