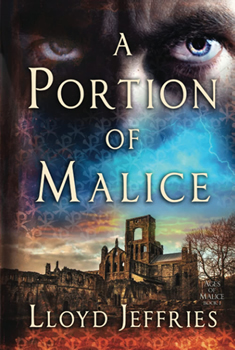 Pulitzer Prize-winning journalist Emery Merrick presses a pistol to his temple. Then there’s a knock at the door. Billionaire Thaddeus Drake hires Emery to write his biography. But Drake has a dark secret, and Emery quickly discovers he heads an ancient, secret society which aims to fulfill prophecy and sacrifice the Earth to a bloodthirsty God. Deep and emotionally stirring, Emery finds himself plunged into an immortal world of darkness, deceit, and barbarity.

This thought-provoking thrill-ride chronicles one man’s explosive journey into the apocalypse and one man’s epic quest to confront God as an equal. A captivating odyssey through history and time, A PORTION OF MALICE changes the conversation about spirituality, redemption, and the world in which we live.

Humanity hangs by a slender thread. Will one man make a difference…or die trying?

The Big Thrill spent some time with Lloyd Jeffries to learn more about his religious thriller, A PORTION OF MALICE:

Character! The character of Cain/Thaddeus Drake rolled over me like a prehistoric tsunami. Plot, setting, etc. took shape from there in wonderful ways. 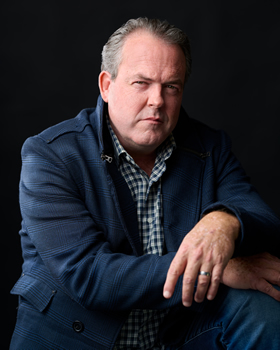 Over 12 years in the making, A PORTION OF MALICE is a tapestry woven from religious belief, legend, myth, folklore, science and modern events. We explore the nature of God, the nature of man, and a single immortal’s journey to usher in the apocalypse and confront God as an equal. A PORTION OF MALICE begins the series Ages of Malice and continues with A Measure of Rhyme, Embers of Shadow, and The Tempests of Time.

I was inspired by Ken Follett’s Pillars of the Earth. It was outstanding in tone, character, and plot and an example of an epic based on regular people. I’ve not found its equal. Crichton I love as a storyteller. The guy told good stories and wasn’t much for genre or rules. I’ve read all his books and found them to be fast-paced and genre bending. Like me, he’s interested in a good story, not a reboot of some tired trope. I also loved Stephen King’s The Stand and most of the Gunslinger series. Fresh stories with characters trying to survive and thrive, to overcome abnormal circumstances. I found them enthralling and entertaining, which is the point of a good book. Right?

If one examines historical evidence, one can only conclude that God is indeed malicious, bloodthirsty, and without compassion. My character Cain realizes that truth early but cannot see how his actions, and those of God, were predestined to assure the apocalypse and the ultimate destruction of Earth and mankind.

Lloyd Jeffries enjoys dark comedies, philosophy, clever turns of phrase, religious studies, and thought experiments involving the esoteric and legendary. A decorated veteran of numerous conflicts, he served in the US military and has practiced emergency, trauma, and wilderness medicine for more than twenty years. He hides out in Florida with his family and Buck the Wonder Dog.