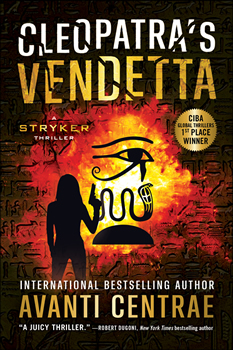 Born a goddess, Cleopatra died a prisoner. But the cobra’s deadly kiss was just the beginning…

Bari, Italy, present day. Think tank Special Ops leader Timothy Stryker and his wife Angie, a self-made CEO, haven’t exactly been seeing eye-to-eye. They take a much-needed Italian holiday, but it comes to a shocking end when Angie and their daughter are kidnapped.

Still raw from the death of their infant son, Stryker is desperate to rescue Angie and reconcile their differences. As he works to locate the captors’ lair, he discovers the kidnappers are behind a string of recent assassinations and attempting another high-profile hit in only seven days. But when he learns their plans for his only remaining child, the scab on his heart tears open and blood begins to spill.

Working from inside her brutal captors’ high-security compound, Angie realizes the cabal is hiding an ancient secret using modern propaganda techniques. And as Stryker races hitmen across India, Egypt, and Greece to thwart the next assassination and save his family, he has to connect a series of deadly dots tracing all the way back to the time of Cleopatra. Ultimately, the estranged pair must shake the deeply buried pillars of western civilization to save their four-year-old daughter from an unspeakable fate. 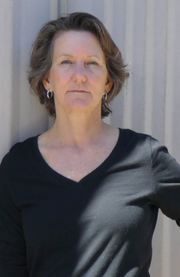 There’s history in this book that might surprise readers—history that has been suppressed for millennia, involving some of humanity’s most intricate issues. Those challenges color our days and provide the blueprint for our future. Without spoiling the surprise, advanced readers have called the book “dangerous” for a reason.

This book illustrates the power of emotional storytelling while blending various genre elements into a controversial, fast-paced bombshell of a thriller about truth and courage.

The research for this book was tons of fun, and definitely surprising at times. It turns out that Cleopatra was perhaps not a traditional beatify, but had sparkling eyes, a commanding presence, and a rich voice. It’s clear she had a host of responsibilities as empress of Egypt, including commanding the army and navy, dispensing justice, setting prices, distributing grain, collecting taxes, dealing with foreign powers, building temples, and acting as high priestess. Everyone answered to her. She was the first to introduce coins of different denominations to her populace and was known to be a prankster with a cunning wit. She was also smart. According to Plutarch, she spoke nine languages, including Greek, Latin, Hebrew, Troglodyte (Ethiopian) and she was the first Ptolemaic ruler to learn the Egyptian language. Her city, Alexandria, was completely ahead of its time. It had automatic doors and hydraulic lifts, hidden treadmills, and even some coin-operated machines. Magnets, wires, pulleys, and other mechanical innovations delighted its citizens. Those were all great discoveries, and there are many more woven into the novel.

Influences for this particular novel include authors such as Dan Brown, Steve Berry, Margaret Atwood, Katherine Neville, and James Rollins. Brown and Neville introduced the concept of historical puzzles influencing global modern threats. Berry works with that concept but focuses on the historical while embracing controversy. Rollins blends in a focus on science. In her most famous work, Atwood cleverly paints a disturbing picture of a dystopian world that my antagonists would love to replicate. Plus, there are other bestselling and award-winning authors such as Kevin Tumlinson, David Leadbeater, Andy McDermott, Ernst Dempsey, J.F Penn, and David S. Brody who all make contributions to the genre. I embrace the best of all their work, combining intrigue, history, science, and mystery into this non-stop action thriller.

This book can be thought of as MISSION IMPOSSIBLE meets DA VINCI CODE meets TAKEN meets THE HANDMAID’S TALE. The novel combines a kidnapping with global assassinations with an ancient puzzle with historical revelations. That’s a lot of sub-genres thrown together in a blender, but advance readers are saying it results in a tasty read. As Robert Dugoni, New York Times & International bestselling author of the Tracy Crosswhite Series said, it has, “Action, adventure, and suspense!”

To learn more about Avanti and her work, please visit her website.