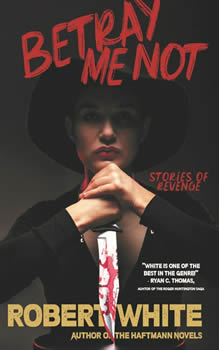 BETRAY ME NOT: Stories of Revenge—is exactly that: cold-, warm-, or insanely hot-blooded revenge on the enemies of those women and girls who believe themselves wronged or betrayed. We’re not taking all “broken hearts” here, either. Sometimes the victims of revenge are even less despicable than the ones being betrayed. Revenge, like water, seeks its own equilibrium, and these women seek revenge not only with cunning but by whatever opportunity provides. Like the she-bear of Kipling’s poem that rips apart the peasant accosting her, “For the female of the species is more deadly than the male,” these females—to borrow from another, earlier poet—can be as red in tooth and claw as any male.

These seventeen stories of female malice include a variety of fictional types from a runaway wife to a trophy wife; from a bullied teenager to a banquet chef; from a stripper to an arachnologist, whose revenge finds its way from beyond the grave. In short, the reader should find more than a morsel or two in this collection of vengeful women to savor.

Author Robert White spent some time talking to The Big Thrill about his latest crime fiction story collection, BETRAY ME NOT:

I always think of character first. This being a collection of stories about women seeking revenge forced me to think about the traits of several kinds of female characters of differing backgrounds, such as a teenaged girl to a Manhattan socialite. Plots, on the other hand, are never easy for me.

Alas, genetics. My mother was an avid cozy mystery reader. (The genetics didn’t go that far because I started an Agatha Christie at 25 and still haven’t finished it. I’m 72.) 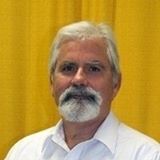 No more or less challenges than my other collections of short stories. Each tale provided its own challenges and obstacles to be overcome—mainly for verisimilitude. All my knowledge of women comes from being the brother of five female siblings and a husband of fifty years.

No. Experience in writing stories for publication in websites, online, and in print magazines sets boundaries around the storyworld unlike the novel. With a certain number of words to deploy, I am always aware of how much “space” is left to be consumed before I provoke a publisher’s/editor’s wrath.

I have three contemporary writers I revere to the point of idolatry: Thomas Harris, David Lindsey, and Martin Cruz Smith. In my reading-only life of the past, Raymond Chandler took precedence.

Robert White has several crime, noir, and hardboiled novels and has published crime stories in various magazines and anthologies. “Inside Man” was selected for Best American Mystery Stories 2019. Most recently, “Leaving Rock Bottom” by NoirCon’s Retreats from Oblivion (Dec. 2021). His private eye, Raimo Jarvi, has appeared in Northtown Eclipse and Northtown Blitz, both by Fahrenheit Press, U.K. A third Raimo Jarvi novel is in the queue. When You Run with Wolves was cited as a finalist by Murder, Mayhem & More for its Top Ten Crime Books of 2018. “If I Let You Get Me” was selected for the Bouchercon 2019 anthology. He has been nominated for a Derringer by the publisher of Thriller Magazine.