A Benson’s Nod to Thornton Wilder’s Our Town 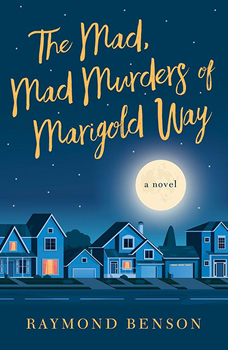 Author Raymond Benson wasn’t always a director of plays and musicals, or the novelist for the James Bond series. Some might be surprised to know that he traveled to all sorts of locations in the late ’90s to research his settings. These days, though, Benson takes advantage of Google Maps to walk around foreign cities.

Another interesting fact is how the computer gaming industry assisted in honing his fiction-writing skills, where creating epic stories with a multitude of characters and a set of obstacles for each, really set the stage for Benson’s writing gifts to flourish.

After spending his college years directing and eventually majoring in theater, Benson went on to direct stage productions and compose scores in New York City. He also collaborated with playwrights. Then, in the early 1980s, Benson took three years to write an encyclopedic coffee table book on the history of James Bond.

“I was a huge fan, and there were no existing books that were a biography of Ian Fleming, a history of the phenomenon, and analyses and critiques of all the novels and movies in one complete volume up to that point, so I decided to fill that gap,” Benson says.

The 1984 publication of The James Bond Bedside Companion changed everything for Benson’s career as he followed his talent for writing and is now the author of six original 007 novels, three film novelizations, and three short stories—not to mention his Black Stiletto series, which has been optioned for a feature film or television series. 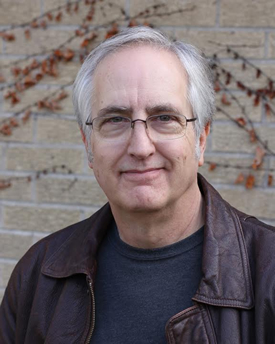 Benson’s new story, The Mad, Mad Murders of Marigold Way, out now from Beaufort Books, follows a cast of neighbors in a Chicago suburb during the lockdown atmosphere in a satirical way. This pandemic-inspired tale of crime garnered a starred review from Publisher’s Weekly, with emphasis on Benson’s ability to carefully craft characters. If readers are fans of the Coen Brothers’ films, or the twisted works of Tom Perrotta, they’ll likely enjoy this quirky tale of adultery and murder during the pandemic lockdown.

What’s this author’s method? Plotting through outlines, breaking a large piece of prose into block paragraphs that represent the chapters. For Benson, this is the prose equivalent of movie storyboards. He agonizes over the plot details, the twists and turns, and the red herrings as he fully develops the three-act structure of the story. Once that is done, writing the book becomes relatively easy, he says.

When asked about his inspiration for his recent novel, Benson gave the COVID-19 pandemic as a reason for delving into this suspenseful storyline. Though the book is not about COVID-19 itself, Benson’s observations during this unique time period got his imagination spinning its wheels. 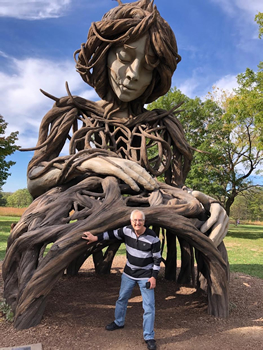 During the early months of the pandemic, Benson often visited parks and outdoor venues like the Morton Arboretum in the Chicago area.

“It was May 2020, and we’d been in lockdown for two months. I was going nuts. Everyone was. We were wearing masks and social distancing, and we were doing crazy things like washing our mail and wearing gloves at the grocery store,” he says. “Everyone was paranoid and suspicious of other people. It struck me that this was an excellent milieu for a murder tale. But everything was so absurd that the story could actually be funny in a way. Coen Brothers-style funny—a dark comedy—that takes place during COVID lockdown. There was also a house on my suburban street that had been for sale for a long time. I started fantasizing about what that empty house could contain during lockdown. I’d always been a fan of Thornton Wilder’s Our Town, too, and I thought, ‘What if Our Town had been written during the pandemic?’ So all these elements played into THE MAD, MAD MURDERS OF MARIGOLD WAY.”

This is not Benson’s first time writing suspenseful stories. The former computer-game writer and designer has written The Black Stiletto, a five-book serial in which a mother has a dark secret that a grown child discovers.

Why the intrigue with these types of mysteries?

“I don’t know why that is, because my own mother had no dark secrets! I suppose that ‘people with secrets’ is a major theme throughout my work,” Benson, author of more than 40 books, admits. 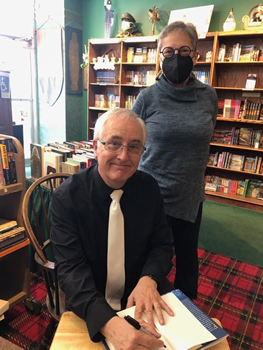 Benson signs the new novel for a fan at Centuries & Sleuths Bookstore in Forest Park, IL.

And it’s interesting how these secrets haunt not only his readers but also their creator. Benson doesn’t sleep well when he’s working on a novel, because his mind is constantly revisiting ideas for his latest creation. This multi-talented and dedicated man actually keeps an eight-to-five schedule with his writing, too. Yet, that doesn’t mean you can’t find him writing at 10 p.m. some nights.

With many achievements behind him, and even more success lurking in the future, Benson shares what he finds to be helpful advice for other writers.

Read a lot. Read the kinds of books you want to write, he says. As for who is privileged enough to read Benson’s work before it hits the press, his wife is the lucky one. “My wife reads everything I write. She is my first beta reader. Her comments and suggestions are always helpful. I have a couple of other beta readers, too.”

In college, Benson’s directing professor taught him about storytelling, analyzing a script, and digging deep into characters, and he’s used it to inform his writing heavily. Additionally, the man who was Ian Fleming’s literary agent—and who became Benson’s agent during the seven years he wrote James Bond—was also influential in encouraging Benson and believing in his work.

THE MAD, MAD MURDERS OF MARIGOLD WAY launched on October 9th. Fans of cinema history might want to catch one of his lectures on a film topic in the Chicago area.