‘Deadlines Make Me a Better Writer’ 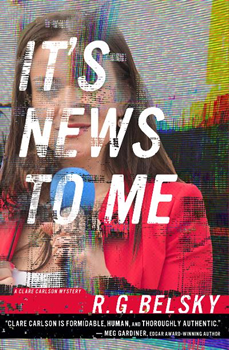 Apparently, she’s ballsier than her creator.

“Clare tells people to their face,” author R.G. Belsky says. “I like her to say things I’d have liked to say—but never did.”

In this latest outing—IT’S NEWS TO ME, Book 5 in the series—Clare needs all her wits about her as she investigates the brutal murder of brilliant, beautiful Riley Hunt, who has arrived in New York City from Dayton, Ohio, to start as a freshman at Easton College. Not long after, she is found bludgeoned to death on the street near her dorm.

In her investigation into Riley’s life and murder, Clare comes up against a top city police official and a mob boss. She also gets a new boss at work: a woman who only cares about ratings and who is willing to do anything to get them—a sure point of conflict between the two women. Meanwhile, Clare’s personal life is still a mess.

Married three times, unafraid to engage in casual relationships, pushy and driven—Clare may not seem like the kind of woman most women might connect or identify with. Belsky says that hasn’t been the case.

“No one has ever said to me, ‘You’ve got to make Clare nicer,’” he says. “My biggest challenge in creating Clare was creating her flaws. She’s a terrific journalist, but she’s a train wreck in her personal life. That’s what makes her character interesting. The trick is to make her balanced; flawed but likable.

“My agent and my two editors are women, so I have access to a lot of female input. If they had a specific criticism about Clare, that’s something I would listen to, but it doesn’t happen a lot.”

Not even in IT’S NEWS TO ME, where, at one point, Clare relieves her boredom while tailing a suspect by rating all her lovers. 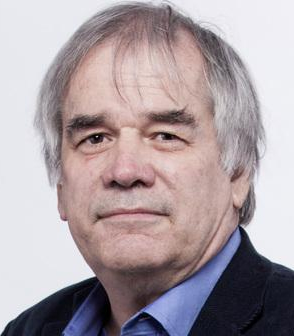 “Most women readers have been complimentary about Clare,” Belsky says, acknowledging that it’s often difficult for women in the news business to balance their personal and professional lives.

“She’s a combination of many female —and male—reporters I’ve worked with,” he says. “There’s not a lot of happy marriages in the business. That’s the lifestyle I try to capture in Clare Carlson’s newsroom.”

“I kick myself for making her a news director,” Belsky says, “but when I wrote Yesterday’s News, it was Clare’s very personal, dramatic story dealing with Clare’s past. I never in a million years thought of Clare as a series character.

“When it sold to OceanView, they changed the original title, which was Forget Me Not. They said, ‘We want to make it sound like it’s about the news business and we want the theme to work for the rest of the series.’”

What series? That was the first notion Belsky had about turning Clare Carlson into a series character. He liked the idea, but then he was stuck with her as TV news director, so now he says, “I have to figure out a way for her to be out there as a reporter on the story.”

In each book, Belsky has given Clare a legitimate reason to get involved as a reporter so she can get the exclusive story and solve the mystery.

“I never heard of a reporter catching a murderer like Clare does,” Belsky says, “but it’s the intensity of a newsroom that I capture that is authentic. You live and die by exclusives. That part is real.” 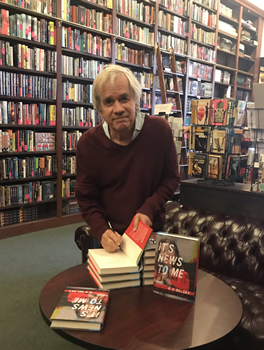 Belsky remembers the biggest exclusive he missed when working at Star magazine—Vanna White’s wedding. He says that Star’s fiercest competition, The National Enquirer, not only got the story but exclusive photos of the nuptials.

“I offered to resign,” Belsky says.

His resignation wasn’t accepted—but he did start writing fiction while working as a journalist. Belsky has had 20 books published over the last 35 years. He writes faster even than his publisher, OceanView, can publish his books.  He mostly writes what he knows and doesn’t get bogged down in research. Which is why he has a contract to write more crime thrillers as Dana Perry for Bookouture. One series features a NYC crime journalist, Jessie Tucker. However, in a departure for him, a second series stars a police detective on Martha’s Vineyard, and a third will feature an FBI agent based in a small town in Ohio.

“Bookouture is very specific about what they like; where they want novels to be set,” he says. “When my agent offered them the first Jessie Tucker novel, they liked it but wanted some changes.

“It’s in my wheelhouse to write, edit, and rewrite for editors and publishers, so I rewrote it the way they wanted it. My journalism background helps me. I sit down and do what’s needed. A book contract is like a deadline. It’s what we know, right? How to write to a deadline to get a news story to editors.

“I know writers who agonize over every word, but I like writing to a deadline. I think it makes me a better writer. 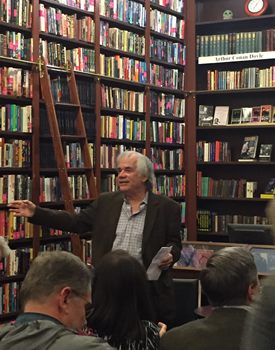 “I sit down and force myself to write. Many mornings I’m looking at a blank page, and I have no idea where I’m going. So I force myself to start by writing down one paragraph. You’re not going to get anything done unless you force yourself to sit down and write.  You can always go back and rewrite once it’s down on paper; however, in most cases I find that it’s better than I thought it was.

“I try for a chapter a day, or about 1,000 words. The best way to be creative is to start. Write every day and don’t worry about being creative.”

As for advice to those individuals who want to write a novel?

“I know so many people who want to write a novel,” he says. “’Sit down and write it,’ I tell them, but they don’t want to do that. They just want to talk about it.”

It’s probably the same group that Belsky says offer their opinions on what they would have done differently with any one of his books.

“So I say, well, that’s what you would do, but then that would be your book so, write your own novel,” he says. “If my agent or editors have opinions then I’ll listen, but I don’t think a lot about other opinions. You can get a dozen different opinions—and then what ? I feel very strongly about writing my novel for me.” 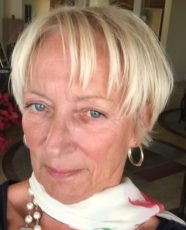 Joanna Elm
Joanna Elm is the author of three crime fiction novels. Her latest, Fool Her Once, a psychological thriller, was released in March 2022 by CamCat Books She has written for newspapers and magazines in the UK as well as celebrity magazines in the US. She was an investigative reporter on the Evening News on London’s Fleet Street, a writer for The Ten O’Clock News in New York, and an associate producer on TV newsmagazine, A Current Affair. You can find her articles and reviews at https://www.joannaelm.com. She is also on Twitter and Instagram as @authorjoannaelm.