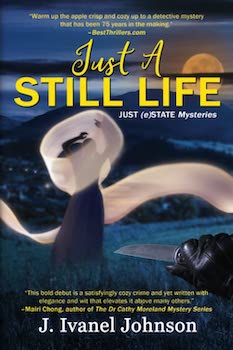 In the simpler times of 1971, Inspector Philip Steele, recently transferred to Fredericton, takes a well-deserved holiday visiting his beloved, elderly godmother in her quaint village nestled in the gently rolling Appalachians of Atlantic Canada. But when a bank robbery and the murder of a teenage boy initiate a string of even more shocking events which wreak panic in the quiet community, Phil must return to long days of investigation with his oft-misquoting black sergeant Zareb Woodbridge, who struggles with questioning some of the more racist locals. While Phil’s godmother, P.J., secretly prepares her annual Harvest Moon Ritual to be used as a trap for the murderer, he himself has fallen in love with the accused: watercolorist Beth Grimball, enjoying newfound ‘freedom’ albeit in a jail cell. Phil finds he is not only compelled to solve the crimes because it’s his job, but—urgently—to save the lives of those he has always loved. And those he has just begun to.

“This bold debut is a satisfyingly cozy crime and yet written with elegance and wit that elevates it above many others.” — Mairi Chong, author of the Dr. Cathy Moreland Mystery Series

“The characters are as intriguing as the plot in this well-written small-town murder mystery that is impossible to put down.” – A.J. McCarthy, award-winning mystery author

Which took shape first: plot, character, or setting?
As my grandmother began this novel in 1947, and I made her a deathbed promise in 1992 to see it published one day, I’ve been re-working and revising all of plot, character and setting for the last 30 years. So in this instance it would be hard to say what came first. In the sequel, Just A Stale Mate, however, it was most definitely the plot, starting with who the murderer would be and what their motives were. 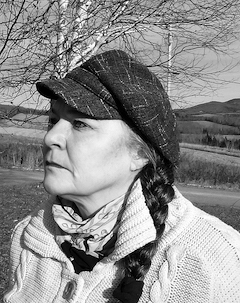 What attracts you to this book’s genre?
Both my grandmother and I were always interested in cozy mysteries, set in charming rural settings where we also enjoyed living ourselves. From the time I was ten, she was passing on all her “Golden Age” Christies, Rendells, Marshes, and Teys to me, although it wasn’t exclusively women authors I read; I also enjoyed Conan Doyle and even some Stout and Ellery Queens. I have always lived in the country (despite having had to teach in some inner-city schools), and I have always enjoyed solving puzzles and experimenting with word play. (This latter is often the basis for clues, or at least red herrings, in my books.) I was destined to be a traditional-style cozy mystery author.

Rewriting and revising one’s own work is difficult enough. Stripping apart a beloved relative’s work, someone who was an inspiration and mentor as well as my best friend, was exceedingly difficult. That’s why it took me 30 years after my grandmother died to finally get this manuscript to a place where it was:

The biggest opportunity was of course the pleasure of finally seeing the promise I made to my grandmother on her deathbed come to fruition. She had wanted to publish her manuscripts in the 1940s but submitted just ONCE and was told she needed ‘more boudoir scenes,’ which she flatly refused to do. She never submitted again, but always kept writing. I was glad to have this opportunity to finally move her ideas forward.

Was there anything new you discovered or that surprised you as you wrote this book?
I discovered that having written several stand-alone manuscripts (some adventure-thriller, some mystery, plus a historical romance) that while working on JUST A STILL LIFE, the ideas for Just a Stale Mate, the sequel/prequel, were already taking root, and they just blossomed so quickly when it came time to pen it. I finished the first draft in under five weeks and have been told it’s even more twisty and sophisticated than STILL LIFE. Full of clues, red herrings, surprise deaths, and a little unexpected action.

No spoilers, but what can you tell us about your book that we won’t find in the jacket copy or the PR material?
Other than the first concept of the ideas coming from my grandmother, I shall divulge that my murderers (in all my writing of murder-mysteries, whether short stories or unpublished ms) are based on friends or readers who have asked to be the killer ‘in the next one.’ I usually make an anagram of their names and use certain distinguishing characteristics or gestures that they are known for as well.

What authors or books have influenced your career as a writer, and why?
As above, the old Golden Age mystery writers, esp. the females.

And more recently, Louise Penney, A.J. McCarthy and Vicky Delany, because they are all Canadian female mystery authors in the genre. Chuck Bowie, who writes cozies as Alexa Bowie, is the only other cozy mystery writer in our province of New Brunswick, too, so I might say he is an inspiration.

And, as in the acknowledgements of JUST A STILL LIFE, I do have to admit that the very early Trixie Beldons and Nancy Drews my sister and I read set me up well for the love of this genre.

J. Ivanel Johnson is the pen name for a disabled author who now lives in the Appalachian range of Northwestern New Brunswick. She has been a high school English and drama teacher, working and living in the highlands of Scotland, on the moors of Yorkshire, and in the Rockies of Montana and the Yukon before settling in the east of Canada, teaching in many culturally diverse communities. Like her grandmother “Ivanel” (who first began drafting this particular manuscript 75 years ago), she has written every day since youth. In fact, Anne Millyard, founder of Toronto’s renown Annick Press once said, when Johnson was only twelve years of age: “She organizes her plots well and certainly knows how to set up suspense.”

To learn more about the author, please visit her website.