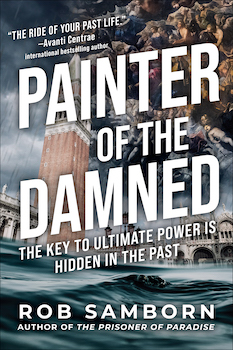 After escaping Venice with their lives, Nick & Julia O’Connor have one goal: return home so they can end their nightmare vacation. But before they reach the American consulate, they’re captured by Interpol and returned to Venice.

Behind Nick’s detention is Salvatore della Porta, the corrupt head of an ancient, enigmatic order that controls Paradise, Tintoretto’s Renaissance masterpiece that’s also a purgatory for thousands of souls—including Nick’s soul mate from the 16th century.

Della Porta believes Nick’s previous life knows the location of a book lost to the ages. This mysterious manuscript will bring him world-changing power—or topple the order.

As Nick’s link to the past consumes him, it’s up to Julia to save her husband and crush della Porta. But with friends in short supply, she must enlist Carlo Zuccaro, unaware the young artist is the order’s new Painter and warden of the damned.

“In this soulful sequel, hop into a Venetian gondola for the ride of your past life. Death stalks the shadows of every arched footbridge. Expect only the unexpected.”
Avanti Centrae, author of the international bestselling VanOps thriller series

“Cleverly using time itself as a central theme, Painter of the Damned is an uncommonly intelligent, shrewd and deftly paced thriller, crafted with such lush language and provocative narrative that it kept me turning pages throughout the long nights.”
-Gary McAvoy, Bestselling author of The Magdalene Chronicles

“. . . manages that rare feat: weaving strands of the other world, history, art, and an ancient, secret order into an entrancing tale you just cannot put down. Fans of Dan Brown and Umberto Eco would love this lyrical, cinematic, yet fast-paced thriller that captures present-day and Renaissance Venice with equal ease. Having followed this wonderful cast of characters steeped in longing and desperation, I find myself wanting to visit Venice once again. An absolutely worthy follow-up to The Prisoner of Paradise.”
-Damyanti Biswas, author of The Blue Bar and You Beneath Your Skin

Rob Samborn recently spent some time with The Big Thrill discussing his latest thriller, PAINTER OF THE DAMNED.

Which took shape first: plot, character, or setting?
Since PAINTER OF THE DAMNED is a follow-up to The Prisoner of Paradise, the characters took shape first. However, though they already existed (in a book, anyway), I needed additional development, as well as new characters, and that happened through a plot that starts off driven by the antagonist. 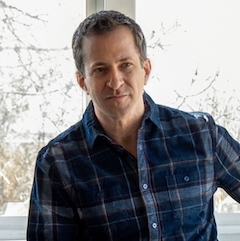 What attracts you to this book’s genre?
I write what I love to read and watch. I’m attracted to thrillers because they’re fun, intelligent, and typically have compelling characters you care enough about to join them for the ride. Since thrillers often encompass so much in terms of character and plot, they’re arguably the most multi-dimensional of all genres. I selected ‘adventure thriller’ above, but PAINTER OF THE DAMNED is also a historical thriller and international suspense book.

The biggest opportunity was allowing the characters and story to grow organically. The characters refused to pack it up and retire (those who survived). They wanted more. If I stopped writing, it would be like turning off a roller coaster in the middle of the ride.

Was there anything new you discovered or that surprised you as you wrote this book?
Continuing the answer above, it surprised me how it all grew organically. It’s a cliche to say the story wrote itself, and that’s not what happened, but I almost felt as though I were documenting events rather than creating with them. The other cool thing about this is that every time I needed a device for the plot, it already existed. That happened for both the contemporary and historical scenes.

No spoilers, but what can you tell us about your book that we won’t find in the jacket copy or the PR material?
My books revolve around the world’s largest oil painting, called Paradise, painted by Jacopo Tintoretto (completed in 1592). This painting is located in the Doge’s Palace in Venice, Italy. It turns out he painted two other massive versions of this painting. One is located in the Louvre in Paris, and one is in the Thyssen-Bornemisza Museum in Madrid.

Dan Brown – His combination of religion and science, often revolving around profound questions, packed into page-turning thrillers, are always a joy to read.

Ernest Hemingway – In my opinion, Hemingway was the master of character and prose. His ability to capture the reader, regardless of a book’s theme—from the Spanish Civil War to an old fisherman trying to catch a fish—is unrivaled.

Robert Ludlum – The master of the spy genre. Ludlum’s books were riveting from start to finish because he hooked us with unique, unforgettable characters (good and bad) in remarkable situations.

JRR Tolkien – A creative genius in every aspect. One of the most influential writers of all time. His world-building is mind-blowing. It’s hard to imagine the entertainment landscape of the last 68 years (and forward) without The Lord of the Rings.

In addition to being a novelist, Rob Samborn is a screenwriter, entrepreneur, and avid traveler. He’s been to forty countries, lived in five of them, and studied nine languages. As a restless spirit who can’t remember the last time he was bored, Rob is on a quest to explore the intricacies of our world and try his hand at a multitude of crafts; he’s also an accomplished artist and musician, as well as a budding furniture maker. A native New Yorker who lived in Los Angeles for twenty years, he now makes his home in Denver with his wife, daughter, and dog.