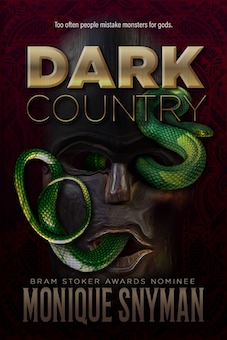 When a ravaged corpse is discovered in Pretoria, South Africa, Esmé Snyder—an occult-crime expert—is called in to investigate. But she doesn’t know the scope of what she’s up against. Esmé is the target of a cat-and-mouse game with a serial killer who uses the paranormal to do his bidding, with the intent of becoming a god on Earth.

But the clock isn’t all that’s working against them. The media catches wind of the threat against the citizens of Pretoria, and their reported speculations promise a post-Apartheid Satanic Panic.

As the body count grows, Esmé must figure out who is behind the heinous crimes before she ends up the final sacrifice.

“A blend of horror and thriller components make DARK COUNTRY a thoroughly compelling, edge-of-your-seat read. As mythology, history, and cultural relations coalesce, Snyman excels in an ability to bring both the investigative and the supernatural potions of the story to life against a backdrop of South African culture. A fictional tale with one foot in reality,” the story tackles issues of magic, belief systems and their impact. The broader meanings of good, evil, and crime-fighting efforts elevate DARK COUNTRY in delightfully unexpected ways, lending to its appeal to a broader audience than readers of supernatural horror or crime-solving alone.” ~Midwest Book Review

“While reading an author without prior exposure, certain resistances and preconceived notions are prevalent, and skepticism rears its ugly head. Allow me to be the first to go on record and say, faithful readers, believe the hype; believe every last word. Few can deny that fear is an ultimate aphrodisiac, and DARK COUNTRY delivers from cover to cover. Snyman’s prose is infectious from page one. The tell-tale sign of an effective storyteller is when a reader is so enthralled, he or she doesn’t even realize they’re reading a story. Perhaps what is most noteworthy is the elusive presence of the serial killer. The author seems to firmly grasp just how effective the elements of less is more. It is often what is read between the lines that is the true horror. Snyman takes the audience along a psychological winding path, knowing full well, as reluctant as we are, we’ll follow each step of the way. The feedback is unanimous; the word of Monique Snyman is here to stay.” ~HorrorNews.net

Which took shape first: plot, character, or setting?
The setting. Living in South Africa, growing up in a time where muti-murders were rampant, it was only natural for me to write about it. 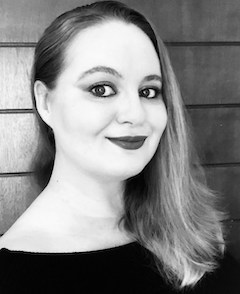 What attracts you to this book’s genre?
Religious crimes have always been fascinating to me. Exploring the darkness within us all is another topic I have always found appealing.

What was the biggest challenge this book presented? What about the biggest opportunity?
This book took long to research and write due to how very real the content is. While the tale is fictitious, the crimes discussed are very real.

What authors or books have influenced your career as a writer, and why?
Weirdly enough, Douglas Adams was a big influence on me. I already possess a dark humor, so his work kind of made it okay for me to add a piece of that into my books. Other authors who have influenced me include Tsitsi Dangermbga, William Golding, and Wilbur Smith.

*****
Monique Snyman’s mind is a confusing bedlam of glitter and death, where candy-coated gore is found in abundance and homicidal unicorns thrive. Sorting out the mess in her head is particularly irksome before she’s ingested a specific amount of coffee, which is equal to half the recommended intake of water for humans per day. When she’s not playing referee to her imaginary friends or trying to overdose on caffeine, she’s doing something with words—be it writing, reading, or editing.

Monique Snyman lives in Pretoria, South Africa, with her husband, daughter, and an adorable Chihuahua. She’s the author of the Bram Stoker Award® nominated novels The Night Weaver and The Bone Carver and the upcoming South African horror series, DARK COUNTRY.