Aftermath: The Story After the Story 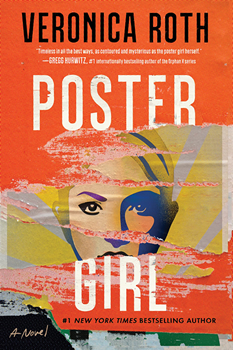 Veronica Roth’s name has become synonymous with “dystopian” fiction. You don’t have to be a young adult to have read—devoured?—her bestselling Divergent series (in book form or on the big screen). And as her latest work veers more toward fiction written intentionally for adults, Roth stays true to her dystopian roots—albeit with emphasis on slightly different themes.

In her debut adult novel Chosen Ones, Roth follows the stories of five twenty-something heroes made famous for saving the world when they were teenagers, forcing them to now consider what it means to be a hero. This “story after the story” premise is also explored in her latest release POSTER GIRL, in which a young woman is compelled to search for a missing girl after the collapse of the oppressive dystopian regime that has given her the only world she has ever known.

Both are the kind of book that makes you think about the present—but also the not-so-distant future and the dangers lurking in it. POSTER GIRL will have you second-guessing how you much you rely on your smartphone and questioning the expanding role of surveillance on society. And it will force you to read well into the night.

POSTER GIRL is terrifying, heartfelt, and powerful. But then, one shouldn’t expect anything less from the author who continues to make us think, all while keeping us turning the pages. Here, Roth shares insight into what inspired POSTER GIRL, how the book’s protagonist, Sonya, is different than any of her other characters, and why we should all be a little wary about the “watching eye effect.” 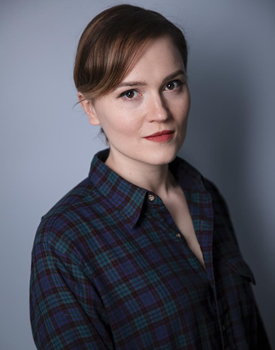 I grew up on young adult dystopian novels—and of course devoured your DIVERGENT books. (I don’t hold a grudge against that killer ending to the series, I promise.) But in 2020, you switched gears to write books for adults with Chosen Ones and now POSTER GIRL. What was the catalyst for that shift?

For me, it doesn’t seem so sudden—everything I wrote after the Divergent series was creeping toward an adult readership in terms of its themes, characters, and sensibilities. And there’s no particular reason for that, other than that I write the ideas that I find most compelling, and the ideas I’ve been finding most compelling lately have been for a more adult audience. As you can probably tell from both Chosen Ones and POSTER GIRL, lately I’m very interested in “the story after the story,” or exploring the aftermaths of the stories we typically hear. In POSTER GIRL’s case: the aftermath of a “dystopian” overthrow.

In POSTER GIRL, we follow a young woman named Sonya who—despite being the face for the authority regime known as the Delegation—finds herself in political prison. What inspired this story, and what did you want readers to take away from it, aside from a satisfying read? 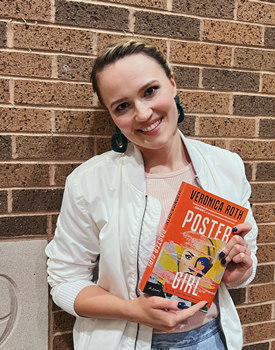 Roth posing with her latest thriller for adults, POSTER GIRL.

I typically write about characters who, despite any prickliness in their personalities, want to do good. But with POSTER GIRL, I was ready for a new challenge. Sonya doesn’t want to do good—I’m not sure she believes that “good” exists. At the start of the book, she’s ambivalent about the world, about morality, about everything. But she goes through tremendous upheaval as she investigates this mystery. Sonya is constantly unraveling the knots that the old regime tied in her mind, and it’s exciting to write about a character like that.

Apart from just being entertaining, I hope that POSTER GIRL asks some good questions of its readers—about their sympathies, about their use of technology, about privacy and forgiveness.

Although there is a sense of community in POSTER GIRL, Sonya goes out on her own when she goes looking for a missing girl the Delegation reassigned. Clearly that’s a great plot point, but was there something else you wanted to explore there?

I think of Sonya as a pretty solitary character, even when she’s with other people. She’s really closed-off and reserved. A friend of mine pointed out recently that she’s almost like your typical “PI” character in film noir—cynical and bitter and lonely, and hell-bent on finding answers. This checks out, because in POSTER GIRL it’s often nighttime, and it’s often raining. Clearly, I was channeling some noir vibes. The missing girl is the mystery, but she’s also the driving force behind Sonya’s growth. Without her, it all falls apart.

Strong female characters—characters with courage—are one of the hallmarks of your writing. Why is it important for you to portray women, of all ages, with such strength? How does Sonya fit that mold for you, and how is she different?

When I was growing up, because I loved genre fiction, I read about a lot of young men setting out on adventures. I still do. But when I write, I follow my curiosity and my interest, and this leads me to write about women. As a writer, I personally have more questions about how women handle power, or danger, or violence, or guilt, than I do about men. That’s just a generalization, of course. 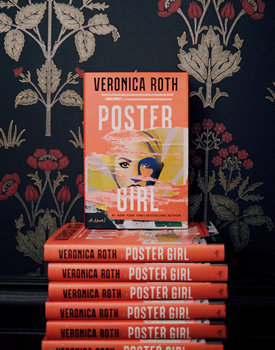 But I don’t think “strength” really enters our analysis when we think about men in stories, unless it’s really out of the ordinary. Similarly, I don’t think about strength, or courage, when I write about women. I just try to write a compelling character. Sonya is a demonstration of that—her courage, or her strength, aren’t really a focal point of POSTER GIRL, which is more concerned with her complicity, her clarity, and her desires. Strength and weakness are at war in her as she becomes something new. This is my first time writing about a character with real ambivalence about the world, who doesn’t necessarily care to seek its good, so in that sense she’s very different from my other characters. Writing her was an exciting challenge.

As technology advances and we continue to reap the benefits, we also start to understand more fully the downfalls—ripe material for thriller writers, for sure. POSTER GIRL certainly makes us think about some of those downfalls. How did society’s complicated relationship with technology inform this book? 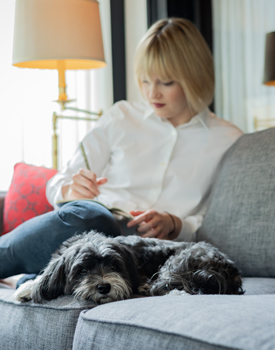 Often when I write stories set in the near future, I look at what’s going on now that presents us with questions about the future. In this case, I looked at my smartphone, and I looked at an investigation the New York Times did about the availability of our location data. (“One Nation, Tracked” was the title, I believe.) What stuck with me from that piece was how much information you can find out about a person based on where they go, and the idea that just because you’re not concerned about the government knowing your location now doesn’t mean you won’t be concerned in the future. Today’s relatively harmless protest attendance could get you on tomorrow’s list of suspicious persons—because governments change, regimes change, and priorities change. We’ve seen that with the recent concern over period-tracking apps, given the Supreme Court decision on Roe v. Wade. This is a present reality that concerns me and has concerned me for some time. So writing about my questions seemed like an obvious choice when it came to building a futuristic regime.

Concerns about privacy and surveillance aren’t new to dystopian fiction, but I wanted to explore a system that felt voluntary, even welcome, to the character being featured. Sonya starts the book with a kind of nostalgia for the mass surveillance system she lost. But her understanding of it changes over time as she finds out new information. 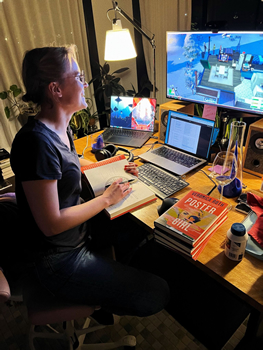 I suspect writing this story required some research. What was the most fascinating thing you learned, and how did you weave that into the book?

Probably the “watching eye effect,” which is basically the discovery that if you just put a picture of an eye somewhere, people’s behavior tends to conform to social norms as if they’re being observed. It’s kind of absurd to me that a drawing could have that much of an effect, but it’s true! It found its way into POSTER GIRL through the surveillance device that everyone carries around in their eyes, the Insight. It emits a ring of light that’s a constant reminder: You’re being watched.

My next project is a futuristic retelling of the Greek tragedy Antigone, called Arch-Conspirator. It’s a novella, and it comes out on February 23rd! I’m really excited for that one; I never thought I would write a retelling, just as I never thought I would write a mystery. The pandemic has had one positive effect in my life, and it’s the willingness to experiment a little.