Features, Latest Books, Up Close
1 month ago
by Lisa Malice
0 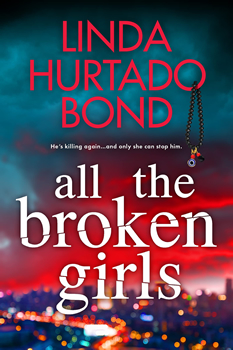 As an award-winning TV journalist with more than 30 years in the business, Linda Hurtado Bond has worked more real-life murder stories in Florida than she cares to remember. Now an anchor for Tampa’s WTVT Fox 13, Bond’s crime stories are pure fiction—four novels, including her latest book, ALL THE BROKEN GIRLS.

Storytelling comes naturally to Bond as a journalist and as a novelist, where her two careers often intersect. As with her first three books—Alive at 5, Cuba Undercover, and Flatline—Bond’s newest offering follows a young, female TV news journalist on a dangerous search for truth and justice. ALL THE BROKEN GIRLS is a provocative and twisted story that asks the age-old question still challenging many societies today: “Does it matter how justice is served if it is deserved?”

The tale follows Tampa crime reporter Mari Alvarez, fresh off a suspension for rattling the wrong city member during her investigation into a string of missing women. She’s off the crime beat, relegated to doing fluff pieces. When a neighbor is gunned down in front of her house, Mari rushes to the scene, despite being told not to by her boss. The woman’s body, lying on the doorstep in a pool of blood, her daughters nearby struggling with their emotions, take Mari back 10 years to her own mother’s unsolved murder at the hands of a lone, faceless gunman. The case is still unsolved, and Mari has been unable to move on. She longs to see justice served.

But there’s more to the scene—the murdered woman’s eyes—one open, the other shut, covered with a gold coin. A bloody, broken Barbie doll on the sidewalk. Clues to the killer’s identity? His motive? Either way, they set Mari and the tightly knit Cuban American neighborhood where she lives on edge, spreading fear that Old-World black magic—the Evil Eye—is at play in the killing. A second similarly staged murder and a series of messages directed at Mari confirms a serial killer is on the loose, one determined to draw her into his murderous game. But what plan does this faceless opponent have for Mari? Is she his pawn, his personal play-by-play announcer, his adversary, or the target of his next violent gambit? Mari has only one option: Beat the master at his own game to bring him to justice. It’s a dangerous move that may cost Mari her job—perhaps even her life.

Beyond their careers in TV journalism, Mari and Bond have another connection: Both are part of Tampa’s Cuban American community. Like Mari, Bond’s husband was born and raised in the ethnic enclave. “In Cuban households, family comes first, with everyone involved, celebrating birthdays, pitching in where needed, especially the abuela (Spanish for ‘grandmother’). That is what we wanted for our kids, so we stayed in Tampa, close to the old neighborhood to raise our family.”

For Mari, family is just as important, core to who she is, forcing her to cling to the only two people she has left after her mother was murdered: her Abuela Bonita and sister Izzy. The pull of family and the Cuban neighborhood is so strong that the three adults still live together and take care of each other.

Spirituality is also core to the Cuban community, lending a unique religious element to ALL THE BROKEN GIRLS—Santeria. Developed in Cuba by enslaved African people imported to the island, Santeria combines elements of Catholicism with West African religion, and many Cubans identify with both traditions and their ceremonies. “Like many cultures, Santeria includes a belief in an Evil Eye, wherein a person can wish another ill will, either intentionally or inadvertently through jealousy or another dark emotion. Many Cuban mothers give their newborns an azabache charm on a bracelet, earring, or pinned to the child’s clothing to protect them from these curses.

“I wasn’t raised in the Cuban culture, so I wasn’t aware of Santeria until my baby daughter was sick with fever. My mother-in-law said someone was giving her the Evil Eye and explained what we needed to do. She prayed over my daughter, told me about the azabache’s power, and the fever went away. That experience stuck with me. It showed me the power of belief. When you are raised to believe in something as a child, whether it’s Santeria or another religion, it stays with you. It’s just part of what you do. That’s what I was trying to convey with Mari: how Santeria and the Catholic religion are just part of the culture. It just goes on, whether one believes in its powers or not.”

Although Mari does not hold religiously to Santeria’s teachings like her abuela does, the Old-World beliefs have a hold on her. In times of crisis, Mari finds comfort in praying to Chango, her Orisha, akin to Saint Barbara in the Catholic religion. She wears the azabache bracelet her Abuela gave her to ward off the ill will from others, then offers it and its protections to the young neighbor whose mother was gunned down on the street. The story pits eye-for-an-eye justice against the American constitutional justice sought by Tampa homicide detective Tony Garcia. It’s a struggle Mari has keenly felt every day after the man who shot her mother got away with murder. If you seek revenge for justice unserved, you may hurt another. When does the cycle end?

ALL THE BROKEN GIRLS is Bond’s first thriller, written at the request of her editor at Entangled Publishing, to fully engage her voice for crime. In true journalist fashion, Bond dove into the assignment, researching the genre and the techniques used by the masters to create heart-pounding suspense.

“I’m a big fan of old movies, so I started by watching Hitchcock’s films. He really knew how to build suspense. Watching Psycho, everyone knows Janet Leigh is going to wind up dead, but she doesn’t have a clue that danger lurks in that hotel room and she’s not safe behind that shower curtain. The audience knows. They saw the build-up to the murder well before it hit the screen.”

Bond learned well. She delivers heart-pounding suspense with ALL THE BROKEN GIRLS. Readers can expect more of the same in Book 2 of the series, which follows Mari and Detective Garcia (a potential love interest by the end of the first book) as they travel to Cuba to rescue Mari’s sister from the man suspected of murdering their mother.

Lisa Malice
Lisa Malice is an organizational psychologist-turned-psychological thriller writer. Her first book, Don’t Look Back, earned finalist honors in five unpublished manuscript contests and is under submission to publishers. Her WIP, Rock-A-Bye Baby, was a finalist for the Killer Nashville Claymore Award. In addition to ITW, Lisa is active in Sisters in Crime. She is the current Vice President for the Florida Gulf Coast chapter, served as president of the Atlanta SinC chapter, and at the national level, as a webinar coordinator/moderator. She is a member of MWA and its Florida chapter. Lisa lives in the Tampa area with her husband.