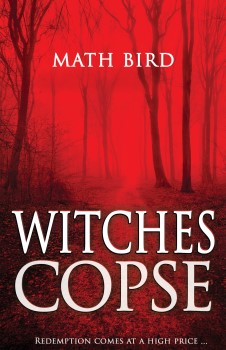 It’s 1979, the Winter of Discontent, and gun for hire Elizabeth Daton’s career ends abruptly when a job results in a young girl being hospitalized. Her luck changes when renowned barrister Quentin Quinby hires her to travel to a remote Welsh village and escort an acquaintance of his back to London from the ominous Witches Copse.

Daton agrees, desperate to make amends, believing she’s been given a second chance. But what begins as a simple errand quickly escalates into a terrifying ordeal of possession, witchcraft, and the occult.

Can Daton triumph, or is she doomed to pay redemption’s price?

First and foremost, I hope it’s a solid entertaining read. Then perhaps as the first part of WITCHES COPSE centers around a remote Welsh village and the ancient woods and hills that surround it, readers new to those areas will become more familiar with Wales and the Welsh landscape, which play a significant role in my writing. Also, I hope they enjoy a crime noir thriller and the folklore horror elements blended into it.

WITCHES COPSE also contains book extracts within a book, an imaginary biographical piece written by one of the antagonists entitled The Strange Lives of Helenora Haye.

There are so many, and I never want to narrow it down to one or two authors as it changes, and I admire all the writers and the novels I read, and each has an influence, to varying degrees, consciously or subconsciously. However, when writing WITCHES COPSE, I read a lot of Shirley Jackson and Cornell Woolrich, but other writers such as Laird Barron and Ben Myers, to name but a few, were also an inspiration.

Q: How important are the notion and the exploration of place in your work?

A: Growing up in the northeast corner of Wales, borders have played a significant part in my understanding of place. Most of northeast Wales lies on the border between England and Wales. Neither fish nor fowl, it’s an in-between place. This could apply to most borderlands and cross-border territories—each a curious amalgam of social and cultural landscapes. Place plays a significant role in our lives. Our sense of it and whether we feel ‘in’ or ‘out’ of place affects who we are, what we were, who we might become.

Crime and noir fiction provides me with an excellent vehicle to explore these notions of place and belonging, ‘inhabitant’ or ‘outsider’, social and geographical borders, the conflicts between the rural and the urban—the periphery and the center.

Math Bird is a British novelist and short story writer.

He’s a member of the Crime Writers Association, and his work has aired on BBC Radio 4, Radio Wales, and Radio 4 Extra.