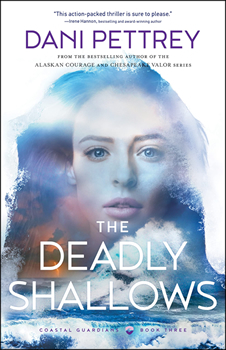 A deadly attack.
A stolen weapon capable of immense destruction.
A painful secret that threatens to tear two hearts apart.

CGIS Agent Noah Rowley is rocked to the core when several of his valued team members come under fire on his Coast Guard base. He and his remaining team race to the scene and end the attack, but not before innocent lives are lost. Furious and grief-stricken, he vows to do whatever is needed to bring the mastermind behind the attack to justice.

Stunned by the ambush, Coast Guard flight medic Brooke Kesler evacuates in a helicopter carrying the only surviving gunman. The gravely wounded man whispers mysterious information to Brooke that immediately paints a target on her back.

As Brooke and Noah race to uncover answers, emotions between them ignite. Noah struggles to protect Brooke at all costs and to conceal the secret that prevents him from becoming what he longs to be—the right man for her.

Everything is at stake as a horrifying truth emerges. . . .

The attack wasn’t the end game. It was only the beginning.

Bestselling author Dani Pettrey took some time out of prolific writing schedule for a quick chat with The Big Thrill about her latest novel. Here’s what she had to say:

Since it’s the third book in my Coastal Guardian series, which features a CGIS team, I already knew the main characters to a decent extent. Getting to delve deeper into them—their wants, drives, and weaknesses was a lot of fun! I learned a lot watching how they reacted under pressure, how their character changes throughout the story, and enjoyed seeing who they became by the end.

I’ve loved mysteries since I started reading Agatha Christie as a kid. I loved being introduced to all the suspects but waiting to discover whodunnit. Moving into my teens, I discovered Rebecca by Daphne du Maurier and fell in love with romantic suspense. Next, I fell for high-octane thrillers. I love writing the page-turning adrenaline of a thriller and combining it with the chemistry and tension of a romance.

This book was the hardest of the fourteen I’ve written. I had health issues, including five surgeries, and I felt like this book was never going to be finished. It took so long to get it to feel “right.” It was the greatest relief when I did the final galley sign-off. My entire team celebrated.

Having two years between books during this time was difficult, but I gave me the opportunity to see how loyal and caring my readers are. How they championed me even without a new release, and now…seeing their excitement for THE DEADLY SHADOWS is humbling and amazing.

A Publishers Weekly and #1 Amazon bestseller, Dani Pettrey has sold nearly 800,000 copies of her novels to readers eagerly awaiting the next release. Dani combines the page-turning adrenaline of a thriller with the chemistry and happy-ever-after of a romance.

She researches murder and mayhem from her home in Maryland.

To learn more about Dani and her work, please visit her website.