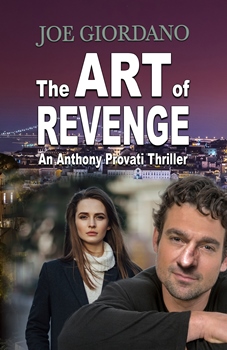 Funded by forgeries and the ransom of stolen paintings, rogue Russian intelligence agents bribe Kim Jong-un to give them a nuclear bomb that they’ll smuggle into the States. Teaming with the FBI, Anthony Provati and co-protagonist Valentina Esposito must stop them. Anthony and Valentina pursue murderous Russian and North Korean operatives from Europe to Asia trying to get to the bottom of the conspiracy, while Pyongyang’s weapon is smuggled into Vladivostok and put on a ship to Mexico before entering the States. In the deadly climax, Anthony and Valentina confront a Russian ogre hitman just as the trigger codes are being entered to explode the nuclear device.

Joe Giordano recently spent some time with The Big Thrill discussing his latest thriller, THE ART OF REVENGE:

THE ART OF REVENGE features two unlikely heroes. Anthony Provati is a jazz pianist, art gallery owner, and sailor who has a mob boss uncle. Valentina Esposito was orphaned at birth but is rewriting her destiny by becoming a brilliant computer programmer. They undertake a global pursuit of murderous Russian and North Korean operatives to foil a terrorist plot funded by forgeries and the ransom of stolen paintings.

Character comes first, but as this is the third book in his series, Anthony Provati’s personality has been established. The female co-protagonist, Valentina Esposito, will be the main character in my next thriller series.

Thrillers provide ample opportunity to immerse your characters into deeper and deeper dilemmas with lots of twists and turns.

The biggest challenge was to get Valentina Esposito’s character right. I was developing her for the first time, and because I’m a man writing about a woman, I had to be careful in relating her feelings and perspectives. She also presented the biggest opportunity because if readers take to her, they’ll enjoy an entire series with her as the main character.

As I write, I’m navigating every twist and turn. Along the way, my characters often speak to me, telling me what they should do next. Quite often, that’s a surprise twist.

I love art, international travel, and fine cuisine, and you’ll find ample examples of my taste throughout the text.

At the start of my career, I took a University of Texas writing course with Ben Fountain, author of Billy Lynn’s Long Halftime Walk, and he set me on the path to become a writer. Of course, as a thriller writing genius, David Baldacci has been influential as well.

Q: Your international settings are realistically portrayed. How were you able to accomplish this?

A: I’m a retired international executive vice president of 3M. Having lived and traveled around the world adds authenticity to my writing about international intrigue, like THE ART OF REVENGE.

Joe Giordano was born in Brooklyn. He and his wife Jane now live in Texas.

Joe’s stories have appeared in more than one hundred magazines including The Saturday Evening Post and Shenandoah. His novels, Birds of Passage, An Italian Immigrant Coming of Age Story (2015), and Appointment with ISIL, an Anthony Provati Thriller (2017) were published by Harvard Square Editions. Rogue Phoenix Press published Drone Strike (2019) and his short story collection, Stories and Places I Remember (2020), and will publish his latest novel, THE ART OF REVENGE, in 2022.

Joe was among one hundred Italian American authors honored by Barnes & Noble to march in Manhattan’s 2017 Columbus Day Parade. Read the first chapter of Joe’s novels, sign up for his blog, or find out more about the author by visiting his website.