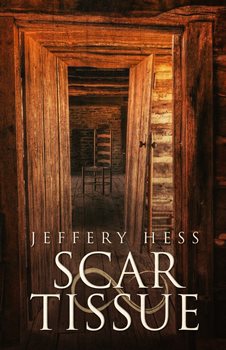 A forty-year-old self-cutting workaholic abandons everything she knows for a stripper with a death wish. Both lives change, only one ends.

Scar Tissue is a psychological noir novel that stunningly brings to life a world others dare not dream of. This is a vivid and memorable portrayal of desire as seen through the eyes of two women with dark hearts and very different goals who cross paths at critical moments in their lives. The power of their hopes and despair, their weaknesses and strengths are a testament to the yearning that resides inside all of us.

This book began with the simple question of “How’d you get this scar?”

In my head, I heard a female voice ask that question. I pursued it and found Abby asking and Dylan on the other end of that scar. I dove head-first into it, which was a wild ride, but it took a lot of time and many drafts to learn what these women were all about.

The shocking and graphic content of Dylan’s yearly ritual was a serious challenge from the onset. But that precipitating question compelled me to forge ahead.

Another challenge was writing two female characters. The writing was tricky to pull off with any semblance of authenticity considering the gender differences. But that’s where the biggest opportunity is. Though early responses have been positive, there are some readers out there today who believe lines such as gender and race shouldn’t be crossed by writers. I fully disagree with such arbitrary limitations on any kind of art.

I was surprised this book became about two issues I’d never considered before writing it: self-harm, also known as non-suicidal self-injury, and the Right to Die movement. The research I did into both issues moved me and made me think more deeply about preconceived notions. I never expected to write about two women facing them, but that initial question set the course.

This could be an extremely long list for many reasons, but in relation to this book, and most of my books, my mind recalled the works of Jim Thompson, James M. Cain, Patricia Highsmith, John D. MacDonald, Elmore Leonard, Chuck Palahniuk, Daniel Woodrell, Richard Lange, John Irving, and Wally Lamb for, among other things, their story structures, their depictions of women, and their intricacies and intensity.

Q: Is the graphic nature of sex and violence necessary?

A: Yes. I consider realism absolutely necessary in all manner of storytelling. Achieving verisimilitude and evoking empathy does not happen through abstraction. Specific and precise details are what I look for as a reader and what I strive to include as a writer. Warts and all. Unvarnished and unrestrained.

Jeffery Hess is the author of the novels SCAR TISSUE, Roughhouse, Tushhog, Beachhead, and No Salvation, and the short-story collection Cold War Canoe Club as well as the editor of the award-winning Home of the Brave anthologies. He lives and writes in Florida, where he leads the DD-214 Writers’ Workshop for military veterans.