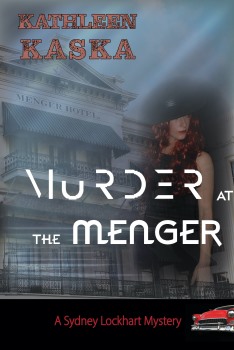 Austin, Texas PI Sydney Lockhart is on the trail of Johnny Pine, a notorious bookie who has absconded with a client’s payout from a horse race. Pine checks into the Menger Hotel in San Antonio with New Orleans jazz singer Nora Jasper. This following day, Sydney discovers Pine murdered in his bed, and Nora points the guilty finger at Sydney. The situation goes from bad to worse when Sydney is attacked and thrown in the river downtown. Luckily, a passerby rescues her, but her memory before her arrival in San Antonio is gone. Her only choice is to continue the investigation, which takes her to New Orleans and straight into the hands of the killer, Estelle Lorie, widow of a horse trainer whom Johnny Pine murdered.

Kathleen Kaska recently spent some time with The Big Thrill discussing her latest mystery, MURDER AT THE MENGER:

My Sydney Lockhart mysteries are set at historic hotels, mainly in the South, that are still in operation today. So the Menger Hotel in San Antonio was next on my list. Also, San Antonio has a rich culture. Even back in the 1950s, it was in an innovative city, open to avant-garde lifestyles.

Mysteries are the genre I prefer to read, and humorous mysteries are my favorite. I’m influenced by Janet Evanovich, Elizabeth Peters, Kerry Greenwood (Miss Fisher), Carl Hiaasen, and Spencer Quinn. I started out writing traditional mysteries and still do, but I wanted to try humor, which was much easier than I thought. I like to say that I didn’t create Sydney Lockhart. She merely walked into my life and started telling her stories; all I had to do was write them down.

I knew I wanted to incorporate horse racing into the plot, but Texas didn’t allow it in the 1950s, so I had to set part of the story in New Orleans. This presented a challenge in creating the timeline because travel was slower back then. I needed to get Sydney from San Antonio to New Orleans and back again as fast as possible. But this challenge allowed me to write a humorous scene, which worked well. The biggest opportunity was going back to New Orleans, which I love, for my research. The next book, Murder at the Pontchartrain, will also occur in New Orleans.

Kathleen Kaska is the author of the awarding-winning mystery series: the Sydney Lockhart Mystery Series set in the 1950s and the Kate Caraway Animal-Rights Mystery Series. Her first two Lockhart mysteries, Murder at the Arlington and Murder at the Luther, were selected as bonus books for the Pulpwood Queen Book Group, the country’s largest book group. She also writes mystery trivia. The Sherlock Holmes Quiz Book was published by Rowman & Littlefield. Her Holmes short story, The Adventure at Old Basingstoke, appears in Sherlock Holmes of Baking Street, a Belanger Books anthology. She is the founder of The Dogs in the Nighttime, the Sherlock Holmes Society of Anacortes, Washington, a scion of The Baker Street Irregulars. Watch for MURDER AT THE MENGER out in June 2022.