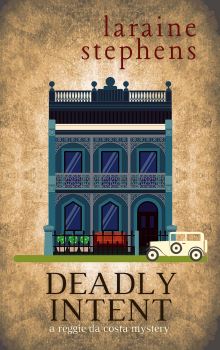 A glint of gold caught his eye. A putrefying hand extended from the sleeve of a checked shirt, its little finger adorned by the smooth curve of a signet ring.

It is October 1923. What looks like a routine report, on the heavy rains battering Melbourne, becomes another case of murder for The Argus’s celebrated crime reporter, Reggie da Costa, devotee of fashionable suits and flamboyant automobiles. A flooded basement hides a ghastly secret: the decomposing remains of Cornelius Stout, a wealthy widower, who has been missing for over two years. With an unlikely partner in straitlaced Dotty Wright, Reggie pursues a cold-blooded, manipulative killer with deadly intentions.

Although the plot of DEADLY INTENT is fictional, I hope that readers will be able to appreciate the extensive background research that goes into the creation of historical crime fiction. If they can visualize 1920s Melbourne, Australia, from DEADLY INTENT, then I have succeeded in conveying a sense of the society of the time. The depiction of the Police Strike of 1923 is finely drawn, as is information on automobiles, cinema, popular dances and music, architecture, public transport, and clothing, which are seamlessly interwoven with the plot. I hope that the historical background is as interesting to the reader as the criminal psychology of the perpetrator. 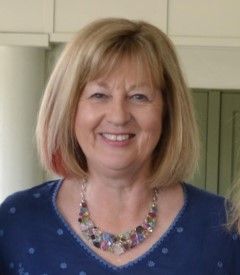 Writing crime fiction combines my two loves: history and mystery stories. I have been a passionate reader of crime fiction since my youth, loving the experience of working out the puzzle of ‘Who dunnit?’ It all started with Conan Doyle’s Sherlock Holmes stories when I was in my early teenage years, and that love has never deserted me. In fact, I have even visited the site of Sherlock’s ‘death’ at the Reichenbach Falls in Meiringen, Switzerland. Because of the depiction of foggy London with its hansom cabs and cobbled streets, I have enjoyed reading crime fiction that conjures up the past whilst offering a cracking good story.

DEADLY INTENT offers an accurate and authentic view of Melbourne, Australia, in 1923. The setting relies on information gleaned from digitized newspapers of the time to flesh out the nature of society, its mores and conventions. The treatment of ‘enemy aliens’ in post-war Australia, the gang wars, the illegal gambling dens, the effect of the Great War on those who served and those who lost loved ones are just some of the themes that DEADLY INTENT covers. With regard to the criminal side, the book conveys the psychology of the sociopath and their tendency to cast blame elsewhere for the crimes that they commit. It looks at motivation and justification and the lengths to which a perpetrator will go to ‘reel in’ their victims.

After working as a teacher-librarian and head of library, Laraine Stephens decided to experience life on the other side of the bookshelves and became a writer of historical crime fiction. DEADLY INTENT is the second in the Reggie da Costa Mysteries following the publication of The Death Mask Murders in 2021. When she isn’t writing, traveling, or playing golf, Laraine finds inspiration from her work as a volunteer guide at the Old Melbourne Gaol. Laraine lives in Beaumaris, a bayside suburb of Melbourne, Australia, with her husband, Bob, and her maladjusted red toy poodle, Zoe.