Cooking Up a New Mystery 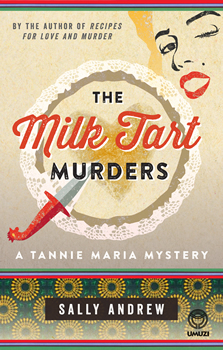 THE MILK TART MURDERS is Sally Andrew’s fourth mystery featuring the delightful Tannie Maria. Set in Ladismith in the Klein Karoo (where Andrew herself lives), Maria works with Jessie and Hattie for the Klein Karoo Gazette writing a love advice and recipe column. She lives outside town with her hens and her flowers and is a superb cook. As usual, the novel is dotted with delicious recipes, a selection of which are given in detail at the end of the book. If you haven’t met Tannie Maria before, you should do so, and you should try out some of those recipes. It’s good to start at the beginning of the series with Recipes for Love and Murder (now a primetime TV series) and follow her adventures from there, but all the stories are standalone (as are the recipes!).

Tannie Maria’s latest adventure starts when Oupa Frik, a movie buff, dies while screening an old movie. Since he’s in his nineties, everyone assumes he’s had a heart attack, but it turns out that he’s been poisoned. As usual, Jessie smells a big story, drops everything else, and ropes Maria into the investigation. Soon they are at odds with Henk, the detective investigating the case who wants them to leave the matter to the police. Henk is Maria’s partner, but trouble is ahead for their relationship.

Oupa Frik has a complicated family who all seem to have a motive to get their hands on his home and his rumored treasure—his nephew Tom and his avaricious wife, his son Abe, and his daughter Elzaan, who seems angry with everyone. But they aren’t the only ones who have a motive. There’s his caregiver Helmina and her demented mother, and there’s Betty, who stands to inherit the house for her orphanage. The mystery is quite complicated, with secreted letters and notes left by the dead man, and a mysterious treasure that might or might not exist. It’ll keep you guessing.

In this exclusive interview with The Big Thrill, Andrew shares insight into some of the ideas behind THE MILK TART MURDERS and her series protagonist, Maria.

With Maria, so much is bound up with food. And her initial jealousy is not of a woman but of another woman’s food. Jealousy is an interesting emotion, which I have struggled with myself. It is a difficult one to get to grips with, because it pulls your energy away from yourself, focusing on others, when in fact it requires a returning to self. Self-confidence, self-worth, self-trust, self-love. This is Maria’s journey in this book.

On the rebound from Henk, Maria starts to eat with Oupa Frik’s son, Abe. They both share a love of food. Abe is most partial to hamburgers and milkshakes, but Maria shares his enthusiasm. Is she subconsciously trying to make Henk jealous, or does she simply need someone to enjoy meals with?

In her misery, Maria is escaping her feelings by overeating junk food. I don’t think she is deliberately trying to make Henk jealous… But perhaps subconsciously she is. Later, with the help of counseling groups run by Ricus, the Satanic Mechanic, she learns: “Face your stuff; don’t stuff your face.”

Can you tell us why Marilyn Monroe features on the cover of the book?

How could I miss an opportunity to put this iconic woman on my cover alongside a milk tart? Oupa Frik is a big fan of Marilyn’s movies. He dies while Maria and Henk are watching her vintage movie Some Like It Hot. The themes of this movie (as described by Maria in Chapter Two) overlap with THE MILK TART MURDERS, and in fact with my and Maria’s philosophies on life.

Jessie is smart and driven, often the impetus behind the investigation. Would you see her in her own series as an investigative reporter in the Klein Karoo one day?

I wonder… Maybe… However, I really like the complementing contrast between Jess, Maria, and Hattie. I think it makes for a better flavor and more humor than Jessie alone.

The police and Jessie and Maria follow parallel investigations and share the results. Sometimes. The Klein Karoo Gazette team gets into real trouble with their clandestine sleuthing, just as Henk predicts. Did you plan that from the start of the book, or did it develop from the story?

I think there is always an intrinsic tension between journalists and police. And between amateur and professional investigators. And this is complicated by romantic involvement between some of the police and the Gazette members. And also the different approach from Hattie as a toe-the-line editor and Jessie as the more edgy journalist. And Maria with her moral drive.

A big attraction of the series is the food and recipes. Where do you find them?

I find them all over. You will see the details in my Acknowledgements. I have piles of recipe books, and I like to celebrate South African cooking talent, with an emphasis on Karoo, traditional and creative food. Sometimes the plot (or an agony aunt letter) calls for a recipe, or sometimes I shape the story around a delicious recipe. I also like to invent entertaining recipes, such as Venus Cake, spekboom ice cream, marmalade rusks, and karoo zoo biscuits. In this latest book, a lot of the recipes are my own.

Do you try them out yourself?

Yes, I test them all out. It is quite a lengthy process, and I am not a skilled chef. I employ a cook to help me, ask friends and fans to test them, and I test the recipes on groups of people. This last book was tested by a team of tasters (many of whom were professional tasters) at a weekend event at La Fontaine in Franschhoek. Some recipes take multiple attempts to perfect. For example, I think the naartjie milk tart involved at least ten attempts by various people before I was happy.

I aim to provide recipes that are moan-out-loud delicious. And I spend many months (sometimes years) finding, perfecting, and testing the 15 recipes at the end of the book.

What will Tannie Maria be up to next?

She will be producing a cookbook, at last. Featuring the recipes from the four novels and maybe a few more.

The cookbook will also contain a short story (“The Killer Canary”) that follows on from the romantic ending of this book. In that story, Maria is suspected of murder. But I make sure she and Henk have a lovely time, to make up for the really hard time I gave them both in THE MILK TART MURDERS.