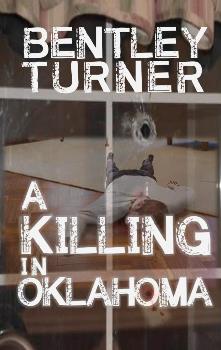 James Williams, a prominent businessman and pillar of Derrick, Oklahoma, has been shot and killed. His son, Frank, who has just earned his MBA, returns home in time to attend his father’s funeral. Although Frank is not a trained detective, he investigates his father’s murder and eventually uncovers evidence that leads to the governor’s office. Frank wonders if the evidence was planted by someone so he would go in the wrong direction.

Bentley Turner recently spent some time with The Big Thrill discussing his latest thriller, A KILLING IN OKLAHOMA:

I hope readers enjoy learning about the character “Frank Williams” as he investigates his father’s murder. I also hope they enjoy how I have presented the story—Frank’s investigation and then the trial of the accused.

I have read mysteries for most of my life. Years ago, I wondered if I could write one that would ring true. I wrote the first draft and then a second. After years of working on the second draft, I submitted it to several publishers. Eventually, The File on Thomas Marks was published. I wrote another mystery, except this one included the trial of the accused. Believe it or not, the process of writing this book seemed easier, although I’m certain it wasn’t. Not really. (I had retired from my full-time job and was able to devote more time to this mystery.) Anyway, I submitted what became A KILLING IN OKLAHOMA to the publisher that released my first mystery. It was accepted.

I don’t know whether I’m the person who should attempt to answer this question, but I’ll try. I wanted to try to write a mystery that concerned a young man’s investigation of his father’s murder. In addition to him uncovering the evidence, I wanted to include the trial of the accused. I knew there was more to the story than just the young man’s investigation and the evidence that pointed to the accused. In fact, what happens during the trial is crucial to the story—at least, in my opinion.

What happens during the investigation and ultimate trial of the accused.

I can’t think of any specific book, but I have read numerous writers over the decades. For instance, I have read novels by John D. MacDonald, James M. Cain, Donald Hamilton, Harold Robbins, Irving Wallace, John O’Hara, Erskine Caldwell, Ernest Hemingway, F. Scott Fitzgerald, and Linwood Barclay, to mention a few. I’m sure one or two of these writers have had an impact on me.

Q: Can Frank Williams help solve his father’s murder? After all, he is not a trained detective.

A: Although he’s told by more than one person to leave the investigation to the authorities, he persists and uncovers evidence that leads to the accused. Of course, the evidence could have been planted by someone to lead him in the wrong direction, which he realizes.