A Mother’s and Son’s Secrets, Five Missing Girls,
an Embezzler, and a Killer 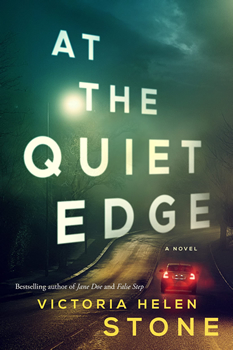 Lily Brown manages a storage facility at the edge of town and lives with her son, Everett, in a shabby apartment on the premises. She works long hours and desperately wants to rebuild her reputation after her con man husband embezzled a fortune and skipped town. Everyone thinks Lily knows where the money is, and the police relentlessly stalk her. But as careful as Lily tries to be, she and Everett both have secrets.

On the side, Lily lets abused women hide in her RV storage area until they can leave town, and Everett snoops in a storage unit and finds news clippings and photos of five missing girls. Their actions put them in the crosshairs of a killer, and neither Lily’s ex nor the new man in her life may be able to save them.

AT THE QUIET EDGE, Victoria Helen Stone’s latest novel, is sure to keep you up late reading to find out whether Lily and Everett will be all right.

“This story is about how secrets can hold us back, and how the truth might save us,” Stone says. “The idea for the story started with one shocking realization.” 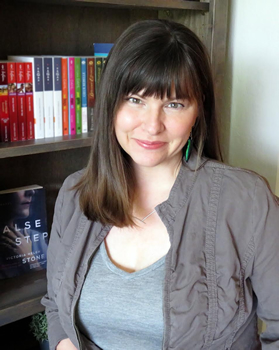 Stone’s teenage child came home from work one night and said he’d driven a younger coworker to a storage facility where he lived in an apartment with his family. “I had no idea there were on-site managers at storage places. Like many others, this facility was in a business park, and I started thinking about its isolation at night. No neighbors, just endless doors and buildings and roads and parking lots with no other people within a mile or two. It seemed like the perfect setting for suspense, especially because I’ve always imagined that those units are full of secrets and forgotten lives.”

Stone says she herself was a “genuine secret baby. My mom and dad were from a small town, but they married and moved to the big city. He left us before I was born, and when he remarried, he didn’t tell his new family about me. My grandparents put all the pictures of me away, I guess, and everyone forgot about me until I showed up as an adult at my grandfather’s funeral. Needless to say, some people were quite surprised. So yes, even in small towns there are lots of secrets! And clearly this is the origin story of my obsession with secret lives.”

In AT THE QUIET EDGE, Stone says, “Lily Brown is barely holding it together and trying to keep the worst of the world away from her son. The secrets she keeps are understandable, but of course there are consequences for hiding important things in your life. Her son, Everett, has secrets too, but his motivation is different. I vividly remember being a kid and hiding scary stuff from my mom because I didn’t want my freedom curtailed. Yes, some creepy guy followed me home, but if I tell my mom, she won’t let me walk to my friend’s house anymore, so I’d rather be scared and keep quiet. It makes perfect sense, but it’s so hard for adults to understand.” 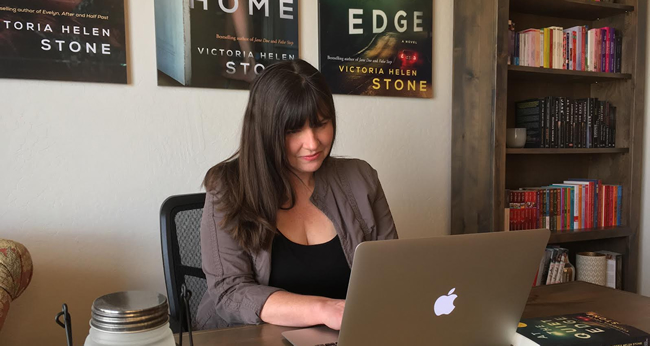 Stone at work on her next suspense novel

Stone goes on to explain more about Lily and Everett. “Everett came to me pretty fully formed because my husband and I have two sons, and I was raised myself by a single mom after my dad abandoned us. I saw all those struggles firsthand, and I felt that tug between pride and resentment and sorrow as an abandoned kid. Plus, I think twelve is such a great age. They’re pushing so hard toward independence, but they’re still little kids. I love it. I think Everett is easy to root for despite his struggles and missteps. We learn early on that Everett is breaking into units, but we can also see that he knows it’s wrong and is tortured by the guilt. Twelve-year-olds aren’t renowned for impulse control, after all. He’s trying to figure out his life and be brave in this scary world.” 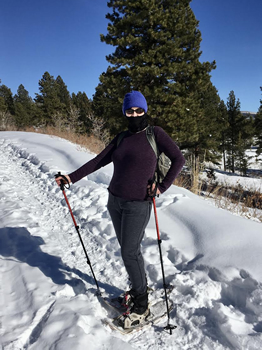 Stone snowshoes in the High Uintas.

On the other hand, Lily was more complicated. “I get along great with my mom, but I also know what it’s like to grow up learning how to fend for yourself. My mom and sisters were also great blueprints for that. With Lily, I wasn’t sure how gritty to make her, how reckless, how much the reader would forgive. I tend to err on the darker side of that in some of my writing, but I decided to give Lily a bit more brightness, which probably makes her mistakes easier to forgive. She really is doing her best, and I hope her love for her son comes through on the page.”

That love is what helps save them—Lily’s con man ex-husband puts them both in danger. “Lily has no idea how dangerous he is when he reappears in their lives. She can’t trust her instincts about him, about anyone, and she’s also afraid to push him too far, because he’s still capable of ruining their lives and maybe far worse. On the other hand, maybe he’s telling the truth, and he’s only back in contact because he loves his son. How can she deny her son a connection if his father is telling the truth? But how can she endanger them both by believing anything a criminal fugitive says?”

Then a new man enters Lily’s life. “He’s also a stranger. I really wanted to play up the inherent danger and doubt of a single parent approaching romance again. She doesn’t truly know anything about Alex, and neither do we. Everett has legitimate suspicions about the man, but how can his mom separate these fears Everett can’t quite name from what might be a normal reaction to his mom starting to date? Alex adds a wall between Lily and Everett. They’re each lying about him to the other and therefore putting themselves in deeper danger.” 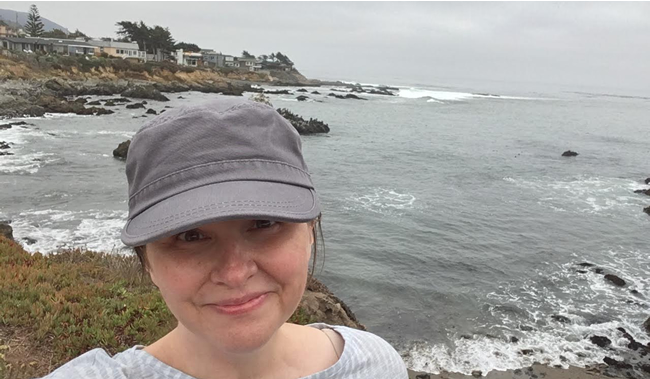 AT THE QUIET EDGE is Stone’s fourth novel of suspense. She is also the USA Today bestselling author of 29 romance novels writing as Victoria Dahl. “I grew up poor, so we didn’t have much, but we always had books,” she says. “My mom was a single working mother who was home with me and my three sisters when she wasn’t working, so books were her only escape. Needless to say, I got my hands on romance novels and Stephen King and Flowers in the Attic at far too young an age, and I loved it all.

“I always wanted to be a writer, but I wanted a financially secure back-up plan, so I majored in business at college and worked in the financial industry. When I had my first child, I quit working to stay home with him, and I started my new career of writing. I wrote five books before I finally landed an agent, and four of those have never been published. They were the practice I needed to get to book five and my first contract.” 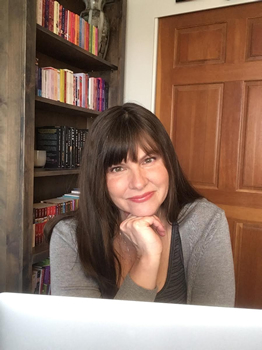 Stone in her home office in the mountains of Utah

These days, Stone writes in her home office and is a pantser who writes an “increasingly vague” outline for her publisher to review. “During deadline, I’m writing six to seven days a week. My goal is five pages a day, but as I get toward the end, I naturally start speeding up. I’m often not quite sure how it’s going to end, so it’s a fun ride for me! I write straight through from beginning to end, rereading and shaping things as I go. The revision process at Lake Union is pretty intense, with three full revisions. I think I completely rewrote about 30 percent of AT THE QUIET EDGE during the revision process. So while it might take me only four to five months to write a first draft, I’ll spend another month and a half on revisions. Then I get a little break to relax and brainstorm a new book.”

Speaking of which, after the publication of AT THE QUIET EDGE, Stone’s next book will be called The Hook. “It’s about four strangers who join a women’s boxing class and connect with the class instructor as a mentor. She has an idea about how these women can improve their individual lives by working the system for each other. It’s very empowering until something goes wrong, someone winds up dead, and suddenly nobody knows whom to trust.”