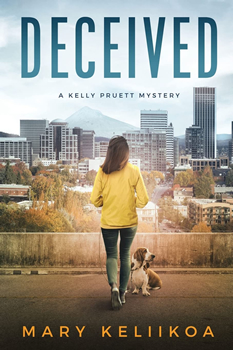 In the past year, she’s written two full novels, revised another, brainstormed a couple more, landed an agent, and is set to release the third book in her award-nominated Kelly Pruett series, DECEIVED.

In this third—and possibly final—installment, Kelly goes undercover in a woman’s homeless shelter to find out what has driven her client’s granddaughter to leave the home. While there, she befriends another young girl who has left due to abuse she endured because of her sexual preference…and before long, that girl goes missing too.

“Kelly is a mom first and foremost, and the idea of these two out in the world without support, and the concern that they’ve gone missing due to corruption inside the shelter, has her Mom instincts on overdrive,” Keliikoa says. “Kelly lost her mom at 14, and she clearly sees who she could have become without the support of her dad.”

But when Kelly’s suddenly kicked off the case, she becomes even more suspicious—and finding the two missing young women is all that matters.

In this interview with The Big Thrill, Keliikoa talks more about the third book in her Kelly Pruett series, why themes of family often weave themselves into her stories, and what she’s most excited for in the upcoming months. 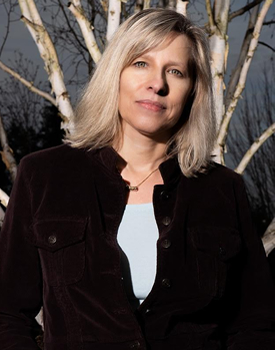 I’d love to hear more about the inspiration for this story. Was there a particular event, article, etc., that kicked things off for you?

Homelessness has touched my husband and my brother during their lives, and of course, it’s an issue at the forefront of many conversations these days. I wanted to bring some light onto the subject in a way that didn’t feel preachy but challenged people’s perception of who is homeless and why. There’s a lot of “assumptions” in that area, and I approached the topic by having Kelly face her own biases. Truth is, there are no easy answers. And going home for young people can be equally dangerous as staying on the streets. I hope in some small way, DECEIVED offers some insight.

What would you say are the biggest changes in Kelly since her debut in Derailed?

One of the biggest changes in Kelly is her ability to understand someone else’s perspective. In the first novel, Kelly is determined to be as good of a PI as her father was prior to his death. To that end, she pushes hard and takes some risks that might not always be prudent. As she grows, so does her ability to hear the opinions of those around her.

Another big change is in her definition of success. But you’ll have to read DECEIVED to see how and why that transpires! 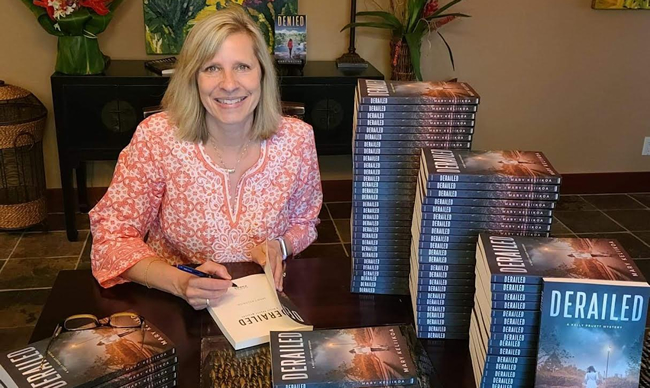 You deal with some heavy topics in DECEIVED—missing and murdered women, drugs. In all of your work, you don’t shy from tough issues. What draws you to these kinds of stories?

I enjoy books with high stakes, and it doesn’t get much higher than the items you just mentioned! More importantly, those stakes compel my main characters forward to find the perpetrator but are also pitting them against an antagonist that has just as much motivation to thwart them. I also love digging into the psychology of why and finding out what motivates such destructive behavior.

To achieve the authenticity you have in DECEIVED, you must have done research. Was there anything you uncovered in your research that surprised you?

In recent years, partly because of the economic impact of COVID and rising costs of housing, there is a significant amount of homelessness. But what was surprising was how few shelters and reasonably priced housing there are, and that’s why we are seeing so many on the streets of Portland. I was also surprised to learn that over 30 percent of the homeless are women, and that nearly 49 percent of the homeless are unsheltered in this area.

In DECEIVED, Kelly works with her half-sister to solve the case—but their relationship wouldn’t be classified as close. Family dynamics are a recurring theme in your work. Why is this important to you? 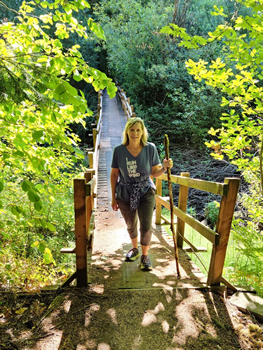 Keliikoa pauses for a photo during a hike.

Family is such a wonderful place to mine emotions, obstacles, history, motivation. And let’s face it, we make a lot of decisions about ourselves and who we are in the world based on that family structure. It’s that backstory that I find so intriguing. What drives us to do what we do? What decisions do we make about ourselves?

But equally true, I find that I write in areas that I want to understand more. My own family dynamics were often strained, and if writing is a form of therapy, perhaps I’m working through my stuff. Only in an interesting way, combining it with investigations and suspense—and a dash of murder.

This is the third book in your Kelly Pruett series—with your first book garnering some major award nominations and high praise. She’s clearly popular—and when I read her voice, it’s evident you love writing her. Is this the end for Kelly, or might there be more books in her future?

I do love Kelly Pruett. She first arrived in 1999, and we’ve been fast friends ever since. However, as time has gone on, new ideas, new books, and opportunities have shown up. While I will miss writing her character and the cast that make up her life, at this time, DECEIVED is the final installment of Kelly Pruett. That doesn’t mean she won’t be back in the future—as a PI, Kelly could always be hired for another case—but her current character arc is complete with this third book.

In our last interview, you had not yet signed with an agent, but it’s been a busy year—congrats on getting an agent! The Big Thrill is as much for aspiring authors as it is for readers, and a good chunk of our readership is about to enter—or is in the middle of—the query trenches. What advice would you give to those writers? 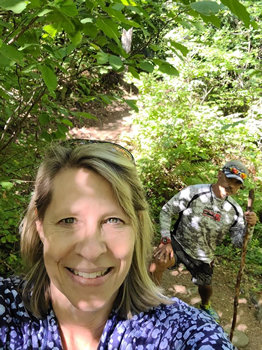 Keliikoa hikes with her husband in the Pacific Northwest.

Well, first, don’t give up. Querying is rough and can mess with your self-esteem, so surround yourself with positive people and just keep querying. And second to that, as soon as you are out on query, start writing another book.

As soon as I started querying the book that I had finished in early 2021, I started a new one. It really worked to keep my focus on creating, something I could control, rather than what was or wasn’t in my inbox (zero control!). It also paid off in the end. When it became clear that the earlier novel wasn’t going to garner an offer, I readied the second one I had finished. While disappointing to have to be out querying once again, I at least wasn’t starting from scratch. And within a month, that second book received a few agent offers.

What can you share about what you’re working on?

Hidden PIeces, featuring a Portland homicide detective turned small town sheriff, will be out in September and is the first book in the Misty Pines series, but I’ve already completed a draft of the follow-up novel, Deadly Tides. My agent is shopping a domestic suspense novel pitched as: On the verge of career success, a paralegal discovers her boss murdered and her sister fleeing the scene after leaving a cryptic message: don’t follow; waiting isn’t in her DNA, but to bring her loved one home, she could destroy the only life and family she’s ever known, including the one she’s desperate to find.

But waiting isn’t in my DNA either, so I’ve already started work on a new book that is leaning toward domestic thriller, and I’m really excited to see where that story will go!