When Strangers Come to Town 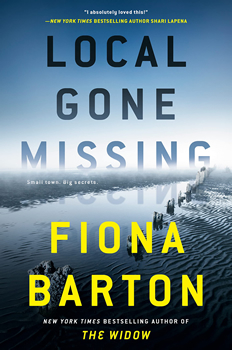 After three adventures, Fiona Barton figured her series protagonist, Kate Waters, deserved a bit of a break. So when she sat down to write her next book, she found herself staring into the unknown—fresh characters and a fresh location.

“I had no reporter center stage to poke her nose in and drive the story,” she says. “I wanted to try something different and fell in love with the idea of a woman police officer at a turning point in her life.”

The result is LOCAL GONE MISSING, a gripping mystery set in an idyllic seaside town where the locals want nothing to do with newcomers coming in and turning their community into a major tourist destination.

“For DI Elise King, a successful and ambitious Major Crime Team detective, her job is at the center of everything,” Barton says. “At 43, she has it all under control: her career path and a partner she believes wants the same things. But the sudden break-up of their relationship, a move to a small seaside town, and a diagnosis of breast cancer turns her life and sense of self upside down.”

But of course, there’s much more mayhem awaiting Elise in Ebbing, and if she hopes to get any R&R while she recovers from her treatments, she first needs to find the local man who has mysteriously gone missing.

In this interview with The Big Thrill, Barton shares what led her to Ebbing, how long she plans to stay there, and why she credits the inspiration for LOCAL GONE MISSING to a 10-minute conversation with a stranger.

LOCAL GONE MISSING starts off in cozy mystery fashion: Elise, a detective, has moved to Ebbing after battling breast cancer. The town itself—a lovely seaside location— creates such fabulous atmospheric detail. What drew you to this quaint location for this book? 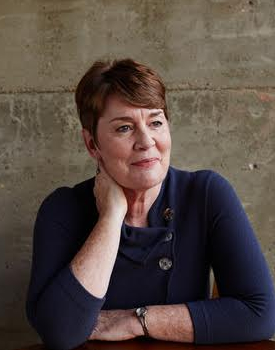 Circumstances! My husband and I moved back to the UK from France and found ourselves living by the sea for the first time in our lives. Coastal towns and villages can look so idyllic—the sea sparkling, the beach busy with surfers and swimmers, ice creams and little cafes with queues of holidaymakers outside. But take a look at the online neighborhood forums for the reality. They are often a masterclass in barely contained fury. In amongst the ads for pre-loved sofas and window replacement are people festering about the things they see every day—fly tipping, dog messes, blocked views, bad parking. And weekenders, of course. The feud between locals and wealthy blow-ins who buy up properties that stand empty for most of the year simmers just below the surface in seaside towns all over the UK. It was meat and drink to a thriller writer…

The book quickly moves from cozy to full-on police procedural when local man Charlie goes missing and the tensions in this once-quiet seaside town continue to mount. I’d love to hear more about the inspiration for this story.

It was just a 10-minute conversation with a stranger, but it burrowed into my brain and has stayed with me ever since. I was at an event abroad where I didn’t know a soul and started chatting to a group at the bar. It was all very innocuous until another Brit started talking confidently about his connections, dropping names like confetti, including members of the royal household. Everyone else hung on his every word, but I knew that he was a fake. Unluckily for him, he’d picked a subject I knew about—I’d covered royal stories as a journalist and immediately spotted wrong names and titles. I caught his eye after one particularly outrageous claim, and he went quiet, pretending to see someone he knew across the room, and left.

Barton stands on a pier near her West Sussex home.

Afterwards, I couldn’t stop thinking about his reasons for reinventing himself—and the effort required to lie consistently. And the terror of being exposed. I suppose I loved the fact that it just takes a bit of chutzpah to create a new persona and shed your old skin when you arrive in a new community. There must be hundreds of men and women doing just that at this precise moment. Until a simple twist of fate—someone who can lay bare the lies—arrives. The jeopardy is palpable—and delicious.

“Money is the root of all evil” is a theme that runs through LOCAL GONE MISSING, as the town transforms—albeit with some resistance—from quaint locale to hopping tourist attraction. Aside from a great read, was there anything you wanted the reader to take away from this novel?

Every reader will find their own takeaway, I hope. As a famous writer said several hundred years ago: “A writer only begins a book. A reader finishes it.”

While the initial plot of LOCAL GONE MISSING might seem straightforward at first glance, you’ve woven in a multitude of subplots, and we’re introduced to a number of characters. The Big Thrill is as much for aspiring writers as it is for readers. What advice would you give for creating non-linear plots—is there a process that you use for each book? 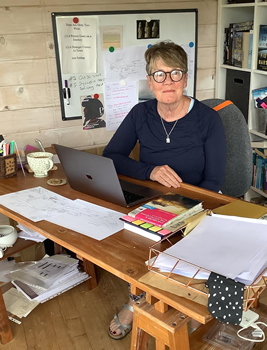 Barton in her shed/office garden.

Ha! I never take the easy way out… I have always used multiple voices and perspectives because that is what I did as a journalist—and what I love reading. The brilliant Kate Atkinson (When Will There Be Good News? and Life After Life) is my inspiration for the power of a story told by many and the delicious tension of guessing who is telling the truth.

But I won’t lie—it’s complicated and occasionally mind-blowing (like when I find myself surrounded by bits of paper with single—now meaningless—words on them and no idea what happens next). But it is a wonderful feeling to dance with all those partners at once. Every writer has his/her/their own process—you need to find yours. I am a plunger rather than a planner, but I do occasionally reach for a spreadsheet when my timelines threaten to overwhelm me.

It has been a bit of both, to be honest. They tell me I write domestic noir—where terrible or extraordinary things happen to ordinary people. So I think you could say my whole career as a journalist was an apprenticeship for this genre. I have a fantastic cast of characters from my years as a reporter: the people at the center of stories—and those on the periphery, watching silently and keeping their secrets.

However… It was an incredible challenge to write fiction after years of digging for the truth. And I’d never written anything longer than 3,000 words—and rarely at that length. I wrote according to the rules embedded in my DNA: be brief, objective, and put all the facts in the first paragraph. Not great for a thriller… So I had to forget all that. But I kept the short sentences and the ability to write fast. I still write in my head before I put my fingers on the keyboard and edit later. It feels a bit dangerous sometimes, like walking a tightrope, but adrenaline is a great motivator. 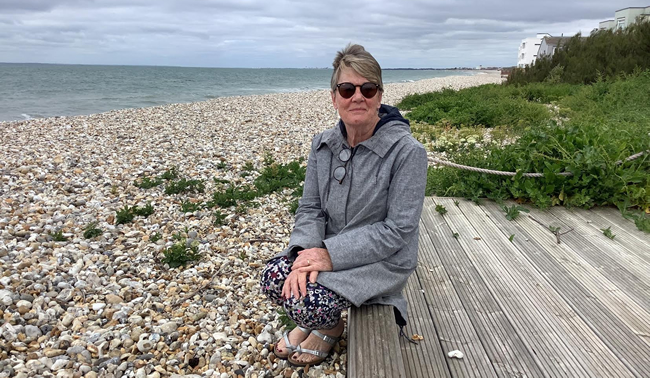 Barton on the deck at the bottom of her garden on the West Sussex coast, between Brighton and Portsmouth.

As a journalist, research must come second nature to you. Was there anything you discovered while researching for LOCAL GONE MISSING that surprised you?

I think my search history would terrify my family… I now know what a dead body smells like, how to kill someone without leaving a mark—and the enduring properties of sweetcorn in the gut.

But the most interesting research I did was around breast cancer. It led me to talk to some remarkable detectives who are not only fighting their own battles; they are campaigning for awareness and better treatment. And they were wonderfully open, frank—and funny—about their fears, the daily challenges of being seen as “a victim” by colleagues, the horrors of hair loss and “chemo brain” and forgetting what you’re talking about.

Although LOCAL GONE MISSING is not part of your bestselling Kate Waters series, it feels like it has potential to kick off a new series, or at least a return to Ebbing and Elise, who demonstrates some impressive detective chops. Any possibility there?