Celebrating the Long Road to Publishing 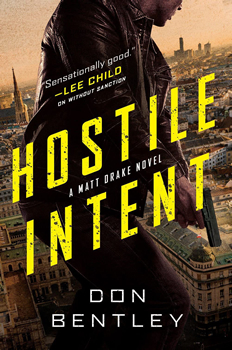 Even as he celebrates the release of his new novel, HOSTILE INTENT, Don Bentley knows it’s been a long road to becoming a published author.  “If you discount the three novels that didn’t sell and the 17 years it took me to write them, I’m pretty much an overnight success,” he says wryly. That sharp sense of humor and dogged determination are traits he shares with his series character, Matt Drake.

In Drake’s latest adventure, his pursuit of a missing intelligence asset leads him into a case with global implications, including an eerily prescient showdown between Russia and Ukraine.

Bentley says his own time working on military decision-making exercises while in the Army gave him insight into how to imagine what might happen in a conflict between those two nations. “What it really does is train you to think how your adversary is gonna think, and so it’s an incredibly useful tool as a writer,” he says. 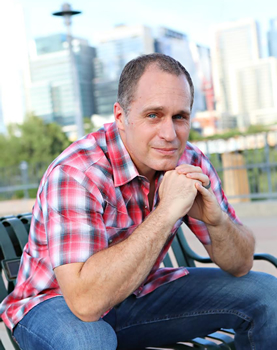 Over the years, Bentley has been able to gather a lot of tools along the road to becoming an author.  He can still recall being in high school when a creative writing assignment caught his English teacher’s eye.  As Bentley says, “I remember her pulling me aside saying, ‘Hey, you actually have what it takes to do this, you should pursue this.’  And so being a good student, I listened to her advice and went and majored in electrical engineering and did the writer on-the-side thing for a number of years.”

Although Bentley’s career path led him away from being a full-time author, it took him to places that would later inform his work. He worked as an Army Apache helicopter pilot, an FBI special agent, and a SWAT team member. But his passion for words never let up.

“In about 2001 or so, I decided to get serious about writing,” he says. For him, that meant honing his craft. He took some online classes with Writer’s Digest and started writing novels. But a key decision was pursuing an MFA in writing popular fiction. 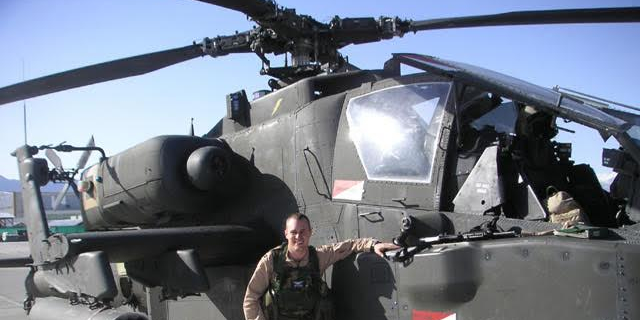 Bentley stands next to his Apache in Afghanistan.

“What I got out of my MFA program was not what I thought I was coming there to get,” Bentley admits. “The most useful thing I got, and there were a lot of useful things, but the most beneficial thing to me, was a buddy of mine named John Dixon, who is a traditionally published author as well, who became my critique partner.”

Bentley says that one of his biggest lessons came far beyond the classroom walls, while he and his friend Dixon were out in a shopping mall. “We’re talking about my book and why it didn’t sell,” he says. “And we walked by B. Daltons or one of the bookstores, and my friend said, ‘C’mere, I wanna show you something.’ And he said, ‘Show me three books that yours should be shelved next to.’  I pointed out three books that were good-selling books in my genre, and he said, ‘Let’s take them down and check something.’” 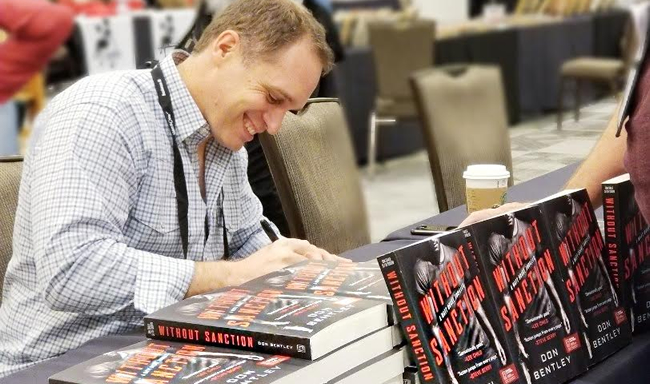 With Dixon by his side, Bentley read the openings of all those books, and what he found caught him by surprise. “In all three of the books, in the first chapter, either somebody had a gun, somebody used a gun, there was a dead body, or something like that,” Bentley says.  “And he looked at me and he’s like, ‘Does your book have a gun, or somebody using it, or somebody dying in the first chapter?’ And it didn’t.” The lesson for Bentley was simple: “You have to understand the expectations of your readers if you’re going to write in that genre.”

That was a lightbulb moment, one that helped Bentley understand the difference between an aspiring author and a published one.

“After that, I took one of my favorite Vince Flynn books, and I used note cards and just cut the entire book apart, scene by scene, character by character,” he says. “And I taped it up onto my bedroom wall, much to my wife’s chagrin.”

Bentley and his wife, Angela, with Brad and Elaine Taylor and friends at a signing at Bouchercon

That process enabled Bentley to figure out why and how the novel worked.

“I liken it to the difference between looking at a building and looking at the blueprints of the building,” he says.

That was how Bentley came to create the character of Matt Drake, an officer with the Defense Intelligence Agency. “I made some really intentional choices,” he says. “I looked out and said, ‘Okay, in the world of protagonists in my genre, what are they like? And how can I be a little bit different?’” One element is adding a level of humor that might seem more at home in a Robert B. Parker novel than an international thriller.

Bentley (front) with the Troop I commanded in Afghanistan

Another choice was where to position his main character. As Bentley explains, “I looked around and said, ‘Okay, there’s a lot of special operations folks who are protagonists, there are a lot of CIA people who are protagonists.’  And so that’s why I chose the DIA, Defense Intelligence Agency.”

Bentley has also focused on Drake’s close ties with his wife Laila and best friend Frodo, as opposed to making him a loner. As readers will find in Bentley’s latest novel, those relationships continue to evolve, as does Drake himself.

Bentley signs books at Half Priced Books in Dallas.

“I wanted Matt to change, to develop and grow as a person, and so I want to still do that, and that certainly affects some of what he does,” he says. But that doesn’t mean Bentley knows where Matt Drake is headed next, any more than he knew where his own path as a writer would take him.