A Call to Compassion and Empathy 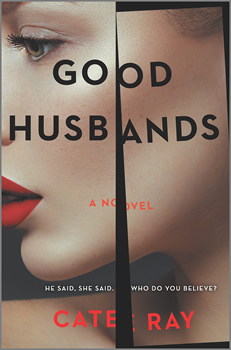 Cate Ray grew up in a male-dominated family with honest, hardworking women who got their heads down, and honest, hardworking men who made the decisions. She didn’t have sisters, but she did have one brother with whom she was close. As a result, she sought out female friendships from a young age.

“I didn’t often hear what women felt and thought growing up,” she says. “I had to listen really hard. So when I first starting writing fiction, I channelled those voices without even thinking about it.”

In her latest novel, GOOD HUSBANDS, Ray channels the voices of three women—three strangers who have one startling thing in common. Each of them has received a letter accusing their husbands of a decades-old sexual assault. In their quest for the truth, the women come together—but they are unprepared for what they uncover.

Ray talks more about what inspired this compelling—and important—book in this exclusive interview for The Big Thrill.

While there are certainly thriller elements to GOOD HUSBANDS, this is much more than a “thriller.” What insight can you provide about the inception for this story?

There was a very distinct moment when the story was born: I was at choir practice in our local pub when a heated discussion broke out around the table about the Harvey Weinstein trial, which was occupying media headlines at the time. I was surprised by the anger voiced by some of the women, directed at the accusers, rather than Weinstein himself. I thought this was so interesting, I felt there and then that there was a story in it.

You tackle a pretty important—and dark—issue in GOOD HUSBANDS: sexual assault/violence. It’s certainly a timely issue, as well. Aside from a compelling read (mission accomplished), what do you hope readers take away from this novel?

I hope that readers might give extra thought to the women (because it’s often women) who bring sexual allegations to light, rather than automatically placing them in their well, that wouldn’t happen to me, therefore she must have asked for it box. I’m not finger-pointing. We’re all guilty of this to varying extents. Above all else, the story is a call to compassion and empathy. It worries me that we’re not listening to each other anymore. I don’t think social media helps in that respect. Increasingly, we’re being herded into a for or against mentality which doesn’t allow for details or subtleties, let alone debate.

I suspect you did not go into writing this book lightly. What considerations did you have before starting the writing process? How has the book been received?

As soon as you write about sexual assault, survivors will be looking to you to voice some of their pain and the myriad untruths. Whenever a writer homes in on a raw issue, the reader—particularly one who identifies with this particular pain—will home in on it too. Get it wrong and you’re dead to them. Rape is one such subject and carries a weight of responsibility. I didn’t go into this with a sense of grandiosity and my own importance, but I did understand that I had only one shot at getting it right. From the response I’ve received from early readers, some of whom had personal experience of emotional or physical abuse, I’m pleased to say that it looks like my one shot hit the mark.

The story follows three women who receive the same letter accusing their husbands of being involved in a sexual assault from the past. You not only view the assault from their different perspectives, but also their individual responses. Was one POV harder to write than the others, and if so, why?

I would have to say Priyanka because I was writing about someone from a different cultural background to my own. I was really aware that I didn’t want to be getting into appropriation territory. However, I was determined to include her because the story is about opening doors to everyone, not just the chosen few. The #MeToo movement was criticized early on for being very white, so it was important to me to offer diversity in my cast of women.

I imagine getting the “facts” right here was very important. What kind of research was required to get the authenticity right? Was there anything surprising you learned while doing this research?

Yes, I did more research for this book than I actually needed. I didn’t want to spout facts—they can get in the way of readers’ enjoyment—but I did want to be credible, and for someone like me, that means knowing as much as possible. I like to be sure of myself before speaking. In terms of what I found surprising, well, there was so much. Perhaps the two things that stuck with me were the strange phenomenon of women rushing forward to defend men accused of rape, and the fact that a quarter of a jury would believe that consent wasn’t needed if you were in a relationship with someone. My research made me realize what I was up against and to a certain extent what I’ll be up against every time someone picks up my book.

Some might say this is an ambitious book for a debut novel of suspense—they’d be right. But this is not your first book. I’d love to hear a little about your publishing journey and what steered you—after four previous books—toward suspense?

My first four books featured softer domestic settings, exploring family, parenting. There was still a page-turning mechanism because I think that’s important. But for GOOD HUSBANDS, I wanted something braver: a domestic noir that would offer something different. Suspense felt like the right fit—a did-they didn’t-they dynamic. The only pitfall was the notion that suspense should be fast, light as popcorn fiction, but that doesn’t always have to be the case. Sometimes—especially on TV—I think we lack moral takeaways. You don’t have to tie everything up with a bow. Yet it’s a mistake, I feel, to think that people don’t look for meanings and hope, because they do—all the time. So often on TV, it feels like one knife slash after another with the end message being it’s a dark world out there and then you sigh wearily and trundle off to bed, a little more convinced that the world’s a sick place. For me, the best fiction simultaneously offers reality and hope.

What can you share about your work in progress?

At the moment, it’s just a crackling fusion of ideas. So far, I know it’s a cat-and-mouse thriller with a central issue that’s a very important one for our time (affecting women, naturally…), but I don’t want to give too much away. Needless to say, I’m working on it, and I hope you keep me in mind in the future, and that our paths cross again soon.