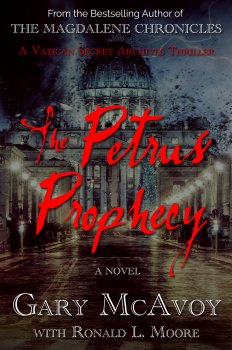 Father Jonah Barlow is dead. The respected Jesuit scholar of apocalyptic studies might have died from a fall in his apartment . . . or was he pushed? All that is known for sure is that the provocative manuscript he was working on—a book that promised to reveal the upcoming fulfillment of ancient and recent prophecies, including the ghastly and shocking Third Secret of Fatima—is missing.

Two female detectives—one from Chicago, the other from Rome—take on the investigation as a possible homicide, turning to Vatican archivist Father Michael Dominic for his help, since Barlow sent the young priest the only other copy of the manuscript.

Newly elected Pope Ignatius, Enrico Petrini, intent on verifying the content of the manuscript against the original handwritten version of the Third Secret—which has been kept sequestered in the Pope’s personal vault for decades—discovers that the keys have been stolen. The search is on for the only other set, kept safely in the hands of a trusted monk in Jerusalem. Meanwhile, a sinister ancient order known as the Knights of the Apocalypse seem to be using the predictions of the manuscript to create fear and chaos as the prophecies appear to be coming fulfilled. Is the end of the world imminent?

Setting. Since my characters are fairly well developed by now (over six books to date), they simply need an exotic location with historical roots to serve as the foundation for the plot, which is generally tied to the contents of the Vatican Secret Archives.

The richness of history and certain of its mysteries, as combined with the hidden treasures contained in the Vatican Secret Archives, serves up tremendous plot potential. So it’s historical fiction set in present day, based on a single past event that has impact on my characters and their world.

No challenges, but I found great opportunity in working with a collaborator for the first time. Ronald L. Moore has a background rich in law enforcement, toxicology, search and rescue K-9 units, weaponry, close quarters combat, and practicing law—all the elements that make for great thriller fodder. Working with him on this book was a privilege, and we’re already plotting out our next book together.

Gary McAvoy is author of several books including his bestselling thriller series The Magdalene Chronicles and his newest series, Vatican Secret Archive Thrillers. His nonfiction work And Every Word Is True has been hailed as a sequel to Truman Capote’s landmark book In Cold Blood. Gary is also a professional collector of ancient manuscripts and historical documents, much of which informs his writing projects.

Two Truths and a Lie by April Henry