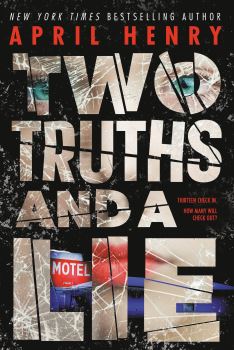 Two Can Keep a Secret meets Bad Times at the El Royale in this isolation thriller where a group of teens are trapped in an old motel with a murderer—from New York Times bestselling author April Henry. Nell has always wanted to be an actor but doubts her ability. As a member of her school’s theater program, she prefers working backstage. On the way to a contest, an unexpected blizzard strands her acting troupe in a creepy motel. Soon they meet a group of strangers from another high school—including the mysterious and handsome Knox, who insists they play the game Two Truths and a Lie. When it’s Nell’s turn, she draws a slip of paper inked in unfamiliar handwriting: I like to watch people die. I’ve lost count of how many people I’ve killed. Suddenly, a night of harmless fun turns into a matter of life and death. As guests go missing, it becomes clear that a murderer is hiding in their midst ready to strike again. In a room full of liars and performers, the truth is never quite what it seems. Nell is going to have to act like her life depends on it—because it does.

April Henry recently spent some time with The Big Thrill discussing her latest thriller, TWO TRUTHS AND A LIE:

My goal in life is to make teenagers like to read, so the main takeaway I am looking for is that reading is fun. 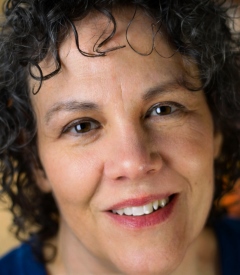 My first book was published in 1999, and this is my 27th, so perhaps my contribution is to show other authors that a long career as a mystery writer is possible.

I knew I wanted there to be an unsolved murder at the hotel, so I googled “unsolved murder hotel” for ideas and got back dozens and dozens of results. With how much time I spend in hotels (I speak at schools a lot), this was somewhat disturbing.

The old murders in the book were inspired by a real 40-year-old Iowa case. In the real case, one of the victim’s uncles was a serial killer who had escaped from a mental hospital, but they think he had nothing to do with the murders.

This summer, it will be 50 years since I sent Roald Dahl a short story I had written, thinking he might like it too. Not only did he send me back a postcard saying how much he liked the story, but he also took it with him to lunch and showed it to his editor. She had a children’s magazine she published in England, and she contacted me and asked me if she could publish my story.

April Henry is the New York Times bestselling author of many acclaimed mysteries for adults and young adults, including the YA novels Girl, Stolen; The Night She Disappeared; The Girl Who Was Supposed to Die; The Girl I Used to Be, which was nominated for an Edgar Award and won the Anthony Award for Best YA Mystery; Count All Her Bones; The Lonely Dead; Run, Hide, Fight Back; The Girl in the White Van; Playing with Fire; Eyes of the Forest; and The Body in the Woods and Blood Will Tell, the first two books in the Point Last Seen series. She lives in Oregon.