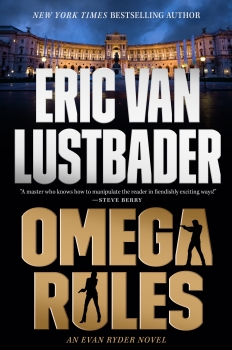 New York Times and internationally bestselling author Eric Van Lustbader, dubbed the “master of the smart thriller” by bestselling author Nelson DeMille, returns with another page-turning thriller that eerily echoes current events: OMEGA RULES (Forge Hardcover, eBook, and Macmillan Audio; On sale: May 24, 2022). First introduced in The Nemesis Manifesto, the compelling heroine Evan Ryder is back, finding herself once again on the trail of a shadowy group that seeks to alter the tenuous political balance of the world… and she finds her own past is far more connected with these dangerous enemies than she may have realized.

But Ryder’s mission continues: Seek out and destroy Omega, a fanatical global cult intent on destroying democracy. The fight against Omega has already cost Evan dearly, but she will not stop until she has torn out the conspiracy by its roots, no matter the risk. The assassination of a Parachute agent in Vienna sets Evan on a dangerous, world-wide hunt for answers and on a collision course with forces so powerful they may be beyond her abilities to annihilate. And ultimately it comes to light that members of Ryder’s long-lost family are the guiding force behind Omega’s horrific stand.

I hope they will get an insight into the dangers far-right white supremacists pose to the country and how, over time and with a great deal of money from like-minded billionaires, they have managed to hijack virtually the entire GOP.

The novel deals with the growing far-right white supremacist movement right here in America. To my knowledge, no other thriller has tackled this very difficult and frightening subject.

I spent six terrifying months going down the white extremist rabbit hole and discovered several surprises. The biggest one is that there is a strange and ancient religious underpinning to many of these extremist groups that is barely known or understood.

Like all extremist groups, the white supremacists are splintered into tribal factions; however, they more or less have the same fear of the white population being supplanted by people of color; they believe the inclusiveness of liberals will mean the downfall of the country. What they all want is for America to become a white Christian nation.

When I was growing up, a fistful of great espionage writers were of great importance to me. Here are the progenitors: Adam Hall, Charles McCarry, Ross Thomas, Jack D. Hunter, and William Rawle Weeks. The novels written by these authors helped shape the world inhabited by my characters. Latterly, this group helped hone my understanding of that world: Len Deighton, Philip Kerr, and John le Carre. This third group remain touchstones for the philosophes of my characters: John Fowles, Carlos Fuentes, and Roberto Bolano. And, above all, Colin Wilson, for his seminal book (at least in my life) The Outsider, which enabled me to understand myself and dig deep into my characters’ psyches.

Eric Van Lustbader is the author of many New York Times bestselling thrillers, including The Testament, First Daughter, Last Snow, and Blood Trust. Lustbader was chosen by Robert Ludlum’s estate to continue the Jason Bourne series. He and his wife live on the South Fork of Long Island. Visit him online at www.ericvanlustbader.com and follow him on Twitter @EVanLustbader or on Instagram @evlust.

The Petrus Prophecy by Gary McAvoy with Ronald L. Moore

The Darkness in the Light by Daniel Kalla