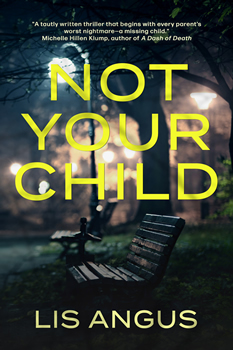 NOT YOUR CHILD, named a 25 Most Anticipated Debut Novel of 2022, started as a mental image that came to author Lis Angus years ago: What if someone showed up and claimed that your child wasn’t your child at all, but belonged to them?

Probably reflected from her own fears and second-guessing about being a mother, Angus propelled this image into a full-blown novel by fleshing out backstories for the mother, accuser, and child characters in her debut. Then she jumped into how such a unique confrontation might play out.

Angus went from a child writing stories at the kitchen table to a teenager submitting to Redbook and Ladies Home Journal. After high school, with the practicalities of university and then a working career, her writing took other paths: essays, reports, briefings, business articles. As an author who’s pushed herself to do the work (writing and rewriting), her advice is the same to others.

“Do the work, find ways to keep learning and improving. Aim for excellence. Aim to write the very best pieces—stories, articles, poems, a play, a memoir, even a novel—that you can…and that includes revision,” she says.

With her recent novel, she says she ruthlessly followed the mantra “all writing is rewriting” as she slashed huge chunks from the first half of the novel. Then, during another draft, she jettisoned through the ending and wrote a new final 25 percent. 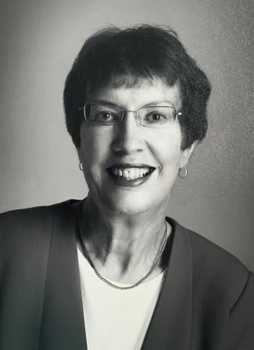 In NOT YOUR CHILD, single mother Susan must deal with the consequences of a traumatized grandfather obsessing and claiming ownership over Susan’s teen daughter, Maddy. The question of this stalker’s confusion is quickly overshadowed by the larger picture of protecting family in any way possible—especially when Maddy goes missing and people start pointing fingers at who’s to blame. The twists presented in this cleverly written novel with tantalizing flashbacks and dire emotional scenes force readers to look at each character’s rationale for their respective actions, deep regrets, and obvious mistakes.

The research for the novel came from Angus and her varied career experiences and the research skills she gained in her graduate studies, which prepared her to work as a consultant, specializing in telecommunications market research, regulation, and policy.

Angus, a Canadian native, says, “That involved me in a variety of activities: giving advice to business clients and government departments, organizing conferences, writing reports and articles, editing a magazine, and even traveling to several of Canada’s European embassies to advise their business clients on opportunities that NAFTA might offer.”

For the key psychological underpinnings of the characters, she drew from her knowledge as a graduate student in psychology, her bright career in political research, and then her experiences working with children and families in crisis. Her perspective on motherhood also brought another dimension to her protagonist’s character.

“I temporarily lost my daughters on separate occasions—both in public places (at a shopping mall and then department store). In each instance, kind strangers helped me quickly locate them,” she says. “But my first visceral reaction burnt its way into my memory: intense terror and guilt, as I imagined the worst and knew it was my fault. I drew on these moments and the emotions they provoked to portray Susan’s reaction when Maddy goes missing.”

What does it take to write a story where you want to explore a fictional plot? Research about Amber alerts, harboring runaway children, the lethal dose of sleeping pills, DNA, and DNA databases all contributed to the plot in NOT YOUR CHILD. Though Google is her first choice for research, she cross-checks reliability against other online resources.

For Angus, writing equals “ass in chair.” She breaks large deadlines and goals into bite-sized targets: early on, it’s daily targets for words written, and in later stages it’s number of scenes or chapters revised.

So far, her book has impacted readers in different ways. Some focus first on the mother-daughter relationship while others gravitate toward the portrayal of the grandfather or the story itself. Angus believes this is because each reader’s own life experiences cause them to connect to the book in their own way.

Perhaps the same could be said of authors too; this certainly applies to Angus. Her many careers and the areas of expertise she gained from each reflected into her writing. For instance, she worked in four different mental health centers that treated children with behavioral or emotional difficulties, in both residential and outpatient settings, using approaches that included family therapy and play therapy. Along the way, she completed a master’s degree in psychology and most of the requirements for a PhD. Angus drew from these aspects to create the protagonist in NOT YOUR CHILD, as well as the fictional children’s clinic where she works.

As for setting, this book in particular brought fans into the setting of Ottawa, but for future writing, who knows? Angus has taken river cruises on the Amazon, Nile, Yangtze, Danube, and Rhine rivers. She’s seen the pyramids, the Great Wall, Machu Picchu, and Stonehenge. Additionally, she’s walked across England and has taken tours in Turkey, Egypt, Peru, Mexico, and China. Plus, Angus spent a year at university in Germany and traveled to several European countries—developing a particular love for London. The next Angus novel could take place in any of the above.

While it’s fun to think about the next book for this author, it’s crucial to recognize how NOT YOUR CHILD would not be what it is today without those who support her and her writing. According to Angus, the only one who read her first couple of drafts was her older daughter, a professional editor. Thankfully, she assisted in identifying strengths and weaknesses.

“Then, when I had a working draft, I was ready for some early beta readers to give me their reactions,” she says. “My husband and other daughter (both of whom read and like crime fiction) and one of my sisters was included in that group. Ultimately, I also sought input from several other writers and readers. The final version was my seventh draft, and by then, quite a few people had read it in one or another iteration.”

Angus’s journey from start to finish shows her dedication to craft.

For those interested in keeping up with Angus, she will be on a panel of “New Voices in Canadian Mystery” on May 27th at the Maple Leaf Mystery conference. It’s a virtual conference, taking place in Canada via Zoom.

Lis Angus is a Canadian suspense writer. Early in her career, she worked with children and families in crisis; later she worked as a policy advisor, business writer, and editor while raising two daughters. She now lives south of Ottawa with her husband.