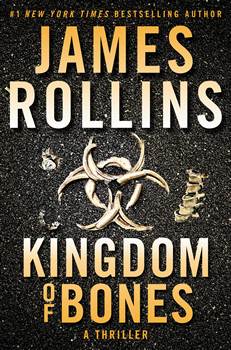 James Rollins returns with another Sigma Force adventure in THE KINGDOM OF BONES—a sprawling jungle epic, where humankind goes head-to-head against Mother Nature. The story starts in Africa at a UN relief camp deep in the Congo. Men, women, and children are found in a dull, catatonic state. The environment surrounding them—both plants and animals—has grown more cunning and predatory, evolving at an exponential pace.

Commander Gray Pierce and Sigma Force are prepared for the extraordinary and have kept the world safe, vigilance for which they have paid a tragic personal price. Yet even these brilliant and seasoned scientific warriors do not understand what is behind this frightening development—or know how to stop it. Sigma Force must uncover the shattering secret at the heart of the African continent—a cursed place known as the Kingdom of Bones. What they learn will illuminate who we are as a species and where we may be headed next.

Rollins is the first to admit this is the story of a virus, although he pitched the idea to his editor back in 2019. But even then, the doctors he interviewed during the research painted a grim picture, a horror story that—hard to believe—could be worse than what the world has seen since 2020.

“KINGDOM OF BONES is not a pandemic novel per se,” Rollins says. “Instead, it delves into the weird biology of viruses. In the pages of the book, you’ll discover many shocking details that are all true, details that will shed new light on this pandemic. To accomplish this, I consulted with a slew of evolutionary biologists, virologists, and medical doctors—and I had to keep tweaking the novel as the pandemic unfolded to make sure it remained as topical as possible. It’s not for the faint of heart—not the storyline, certainly not the truths to be found within the pages.” 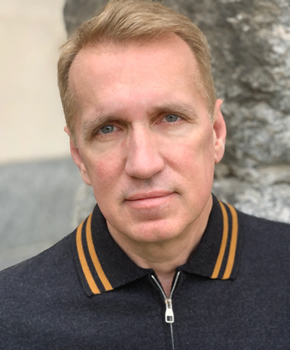 Rollins likes to explore the “what ifs” that lay hidden behind scientific discoveries or historical mysteries, and he blurs the line between fiction and reality to make a satisfying tale. He says that his primary goal in crafting a novel is to build a challenging rollercoaster, with sudden drops and unexpected twists.

“But I also hope my books shine some new light into esoteric circles of lost histories or scientific intrigue,” he says. “At the end of each book, I have a ‘What’s True/What’s Not’ section, where I pull aside the curtain and reveal how much of the book is based on fact and where I might have extrapolated and explored off the beaten path. I do that for a few reasons: to stem off a thousand emailed questions about what’s fact and what isn’t, to showcase how often truth is indeed stranger than fiction, and to leave breadcrumbs for readers to pick up on their own—if there’s some bit of science or history that intrigues them, I offer a roadmap for further investigation.”

While Sigma Force could be described as “scientists with guns,” Rollins recognizes the need for additional characters, specialists in certain areas, who can support the team to fight a global threat. Such characters make indelible impressions in KINGDOM OF BONES.

“Frank Whitaker is a virus hunter, one of those brave men and women who head into the wild and search for pathogens that might trigger the next great pandemic. He’s also a veterinarian, like a certain thriller writer,” Rollins says, a nod to his former career. “Charlotte is a medical doctor working at that besieged UN camp in the Congo. And Benjamin Frey is a post-grad research biologist. Each is unique in their own way, not just for their expertise, but also for who they bring to the table as a character.”

Rollins believes that stories work best when the threat comes in many different levels and many forms. KINGDOM OF BONES has, of course, a global threat, and that’s the reason Sigma is summoned to the scene. On the other hand, being a world savior isn’t always as engaging as the personal threat.

“I love to create foes that are multifaceted,” Rollins says. “In this case, the foil to Sigma’s efforts is a billionaire industrialist who wants to weaponize the viral threat to serve his own means for subjugating the Congo, echoing the long history of colonial brutalism that was written in blood. But equally challenging for Sigma is the viral threat. Is it natural or engineered? What is its source? The same question reverberates today in the debate about the nature and origin of COVID.”

The past collides with the present in KINGDOM OF BONES. A pair of characters who have appeared in prior Sigma novels and in their own standalone adventures return to join the fray.

“It’s Tucker and Kane, a former Army Ranger and his military working dog,” Rollins says. “I first encountered such a heroic pairing of soldier and war dog while on that USO tour to Iraq and Kuwait in association with ITW. Seeing these pairs’ capabilities and recognizing their unique bonds, I wanted to try to capture and honor those relationships. To accomplish that, I spoke with the US Veterinary Corps, interviewed handlers, met their dogs, and saw how these duos grew together to become a single fighting unit. I love Tucker and Kane—and in this novel, their relationship is tested in a most harrowing way.”

After 16 novels, one would think that finding the right story is the biggest challenge, but that’s not the case for Rollins.

“It is weeding through those ideas and paring them down to the best ones,” he says. “Basically, I always have my antennae up for three things: a piece of history that ends in a question mark, a tantalizing bit of science that makes me wonder what if? and finally some intriguing locale where those first two could collide. I collect all those tidbits on a daily basis—from reading news feeds, from magazines, or simply from asking someone when I’m traveling, Tell me something about this place that no one else knows about. By the way, it’s the latter method that generates the best story ideas.”