Unable to Bury the Past 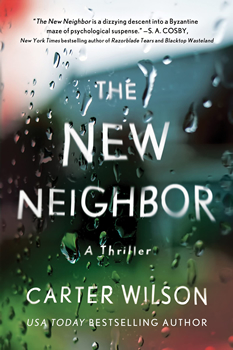 After writing more than a half dozen standalone thrillers, Carter Wilson had no intention of writing a series, or even connecting any of the characters or locations in his novels. But after last year’s The Dead Husband, Wilson found he wasn’t quite ready to leave behind his fictional town of Bury, NH.

“It was the first time I’d created a fictional location,” he says. “I love world-building, and I wasn’t yet ready to move on from this particular world I’d created. Hopefully it gives my readers a nice little sense of déjà vu…”

THE NEW NEIGHBOR will do more than that, since Carter was not only unwilling to leave Bury in the past, he found himself drawn back to a particular house in the town he’d created—1734 Rum Hill Road. It’s the very same mansion Rose Yates returns to in The Dead Husband. The same creepy old home containing far more sinister things than memories.

Things the new occupants—Aidan Marlowe and his seven-year-old twins—are about to learn a lot more about.

“After I finished writing The Dead Husband, I decided that not only wasn’t I done writing about Bury, but I also needed to revisit that house. I had so much fun writing about the malevolent home on Rum Hill Road that I wanted more. So I had to figure out how to use the exact same house in two different stories, yet keep both as standalone reads.”

As the book kicks off, Aiden Marlowe has just buried his wife, the love of his life and mother of his twins, when his phone pings with an incoming text. Aidan has been playing the Powerball lottery with the same numbers for years—only this time, his consistency has paid off. Simultaneously, it is the worst and the best day of his life.

But this is a thriller—a Carter Wilson page-turner at that—and so this is only the beginning.

“I wanted to test Aiden from the opening scene,” Wilson says. “How will you handle a massive overload of conflicting emotions? So I thought of the idea of him losing the love of his life but also winning the lottery, and that confluence of events set the wheels in motion for Aidan to start going mad…”

THE NEW NEIGHBOR is a psychological thriller, so it makes sense for Aiden to get wrapped up in his emotions. But his grief isn’t the only factor in his downward spiral. Soon after moving into the mansion, anonymous and threatening notes start appearing in his driveway.

Aiden tries to ignore them—in fact, he tucks them between the pages of a Stephen King hardcover novel—but the notes are only a prelude to the harassment and danger threatening him and his children. Wilson ratchets up the suspense, taking us on a tour of a haunted house very much the product of his dark imagination.

“I wanted a large and looming house that was also relatively modern,” he says. “Something built to reflect the excesses of the 1980s and the nouveau riche. Something bigger than a McMansion but short of being an estate. I wanted this story to, at its foundation, be a haunted house story, but I didn’t want the house itself to be a cliched 19th-century creepy Victorian mansion. I wanted it to be the ostentatious house of a hedge-fund manager who spent most of his time alone in it.”

With the house and its surroundings primed for creepy, Wilson then cranks up his trademark suspense-inducing style with fast-paced chapters, cliffhanger endings, and taut writing that propels you through the story.

That kind of suspense doesn’t come in the first draft, Wilson admits.

“It all comes alive in the editing,” he says. “Challenge yourself with every sentence: How can I convey this in fewer words? Give your readers credit for filling in a lot of the blanks left out by the writing. Thriller readers need just enough information to remain oriented in the story, but not so much information the story gets bogged down. I tend to cut a lot when I edit, and the manuscript always reads tighter after I do.

“Or you can make it a drinking game,” he says. “By the time you need to pour another drink, force yourself to end the chapter. Makes things interesting.”

Wilson won’t say for sure he’s done with the house on Rum Hill, or even the town in which it sits, but while he ruminates on his next book, he very much likes the idea of the house “remaining unoccupied, gathering dust and ghosts.”

Before the doors close indefinitely, you can check out 1734 Rum Hill Road in both last year’s The Dead Husband and this month’s THE NEW NEIGHBOR. Wilson will be on the promotional circuit with live and virtual events. Check out his website for details.