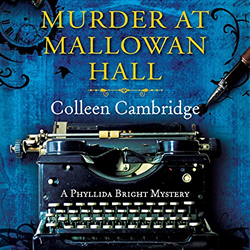 When one thinks of women, history, and mystery, the first name that comes to mind is Agatha Christie. Her remarkable bibliography continues to shine in updated publications of books, audiobooks, and new movie releases.

Christie has also influenced many authors who have used her genius to inspire new characters and stories. This is the case with Colleen Cambridge’s MURDER AT MALLOWAN HALL, read by Jennifer M. Dixon. This is Book 1 in a series featuring Phyllida Bright, a former Army nurse who is now the very capable housekeeper at Mallowan Hall, the fictional residence of Max Mallowan and his wife, the famous Agatha Christie. A dead body is found, clues and red herrings abound, and detective work ensues. The story is set in the 1930s, and listeners will find themselves intrigued by the upstairs/downstairs nature of the relationships as they are revealed. Dixon provides a pitch-perfect tone and accent for Phyllida, an engaging character who listeners will enjoy getting to know.

The first is Jacqueline Winspear with her Maisie Dobbs series. The newest in the series—Book 17—is Earphones Award Winner A SUNLIT WEAPON, read by Orlagh Cassidy, who has become the voice for Maisie Dobbs. Focusing on the lesser-known story of female pilots in the UK during WWII, Winspear informs and surprises at every turn. Her attention to detail and talent at drawing fully painted scenes, partnered with Cassidy’s toolkit of voices, transports listeners to that period and all its intense emotions. Maisie Dobbs and the female pilots represent the ways women in that period were stretching boundaries due to the necessities of war. Winspear also shines a light on racism in the American military of the time. Cassidy beautifully meets the challenge of convincingly performing men, women, and children, as well as American, Scottish, and British accents. An engaging, informative, and emotional listening experience. 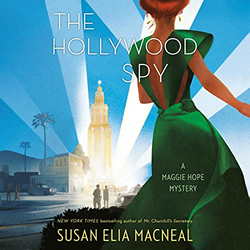 Staying in the same time period but traveling to the United States, the latest addition to Susan Elia MacNeal’s Maggie Hope Series is THE HOLLYWOOD SPY. Narrator Susan Duerden returns to bring to life the characters in this WWII series highlighting the role that women played in the British spy game. Maggie, like Maisie, pushes the boundaries of the role of women during the 1940s. Duerden has become the voice of Maggie Hope, communicating all of her courage and feisty spirit. Duerden’s talent with accents is demonstrated in her performance of Maggie, an American-born British agent, and all of the American characters.

For some people, considering the 1960s as history is a bit shocking. But when you think about it, the ’60s, with all of the openness, creativity, and youth culture, is a wild, colorful canvas to draw on. It was also the beginning of women’s liberation—bra burning, et al. Set in that decade, we have Book 6 in the Brighton Series by Elly Griffiths, THE MIDNIGHT HOUR. While the previous audiobooks in the series were read by James Langton, this entry is narrated by Beth Eyre. Fans of the series may be jolted by the change in narrator. Griffiths, in an author’s note, explains the shift to a female narrator. This series, which takes place in Brighton, England, features a private eye firm led by female investigators Emma Holmes and Sam Collins. The tension is heightened by the relationship between Emma and her husband, Brighton’s police chief. For those not familiar with the series, this one could be a good entry point.

Our April mystery audiobook picks offer captivating listening experiences that range across several decades in the past to our tumultuous present. Listeners looking for a new voice will be enthralled by debut author Stacy Willingham’s twisty thriller. Discover all of our picks for the best in mystery audiobooks this month and start listening. 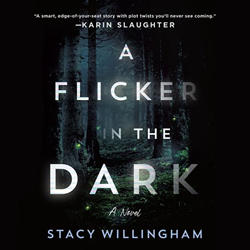 A FLICKER IN THE DARK

An ominous musical intro sets the mood as narrator Karissa Vacker introduces Chloe Davis, a psychologist who is the daughter of a convicted serial killer. Chloe’s entire life has been colored by her father’s crimes. The hushed voice Vacker uses for Chloe is an effective reminder of the character’s ongoing struggles with the past. As the 20th anniversary of her father’s crimes approaches, several teenage girls disappear, leaving Chloe to face tough questions. Listeners will enjoy a gripping and twisty story. 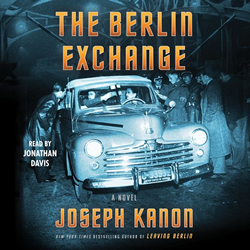 Set against the backdrop of 1960s Berlin at the height of the Cold War, this audiobook features Martin Keller as he takes part in a spy swap. Narrator Jonathan Davis helps build the tension, creating a dark atmosphere of suspicion and suspense. Martin is moved from an English prison to Berlin, where he hopes to be reunited with his ex-wife and son. Davis’s authentic-sounding pronunciation of names and places also helps to set the scenes and build the atmosphere, while his excellent pacing amps up the tension. 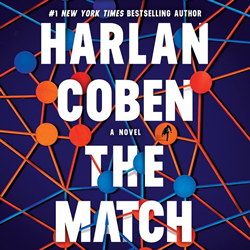 This audiobook is an edge-of-your-seat gripper. It’s the second in a series about Wilde, a loner hero who as a small boy somehow survived living alone in the woods. Decades later, he still doesn’t know who he is or why he was abandoned. It makes zero difference if you haven’t already met Wilde, the marvelous attorney Hester Crimstein, or the rest of the team—narrator Steven Weber is a wizard at making them vivid to you with regional accents, attitude, and verve. The story takes off like a rocket when an ancestry website finds matches to Wilde’s family members—who then vanish. Then the bodies start piling up. It’s skillful, high-octane fun. 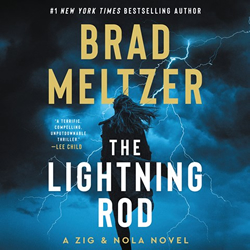 Here’s another winning performance by Scott Brick, who gives resonance to the complicated characters Zig and Nola as they try to make sense of conspiracies and murder. Nola is a skilled warrior so driven by her personal demons that she is unable to trust anyone, even Zig, who once saved her life. Brick’s breathy delivery underscores the danger that follows the two as they work separately to solve Archie Mint’s murder. The thriller contains nuggets of well-guarded military secrets that the author uncovered in his exhaustive research for the story.