A Scent Too Dangerous to Inhale 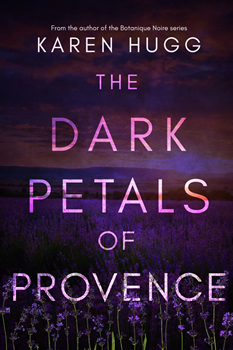 Karen Hugg’s love of horticulture started years ago when she was working in tech. Stressed out by the demands of her 9-to-5, Hugg sought refuge in her backyard garden. As that garden grew, so too did her love and appreciation for plants.

“They didn’t talk back,” she says. “They didn’t schedule meetings. They were just pure and honest in how they grew and responded to my care, and sometimes lack of. Plus, they healed my soul.”

Hugg decided to take her hobby to the next level. She joined a horticulture class and found that the more she learned about plant taxonomy and behavior, the more her passion for them grew.

“They were so delicate and yet resilient. And so smart,” she says. “They gave humans so much with this noble silence. I knew I had a new career vocation.”

But that vocation didn’t remain contained in her garden. Hugg, a former editor for major tech companies like Microsoft and Amazon, started freelance writing articles and reviews about plants, and that soon transitioned into writing books about them too—fiction and non-fiction. 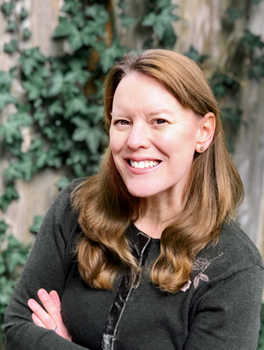 Her latest, THE DARK PETALS OF PROVENCE, is a spellbinding mystery set in the lavender fields of Provence, France, a location Hugg knows intimately, having lived in Paris for a number of years.

When recently-divorced nature photographer April Pearce arrives in Provence to capture its hidden places for a travel magazine, she snaps pictures of more than the aromatic lavender—her camera picks up the distant image of a teenager covered in blood. Concerned, April asks about the teen in the nearby village. But not only do the villagers claim to know nothing about the teen, they don’t want to talk to April at all.

In this interview with The Big Thrill, Hugg goes into detail about how nature inspires her words, her characters, and her creativity—and dishes on three of her favorite plants. (Spoiler: they’re not all flowers!)

In THE DARK PETALS OF PROVENCE, we find ourselves in a gorgeous lavender field, and I immediately smelled that field. When you start a book, what comes first—the plant or the plot?

Haha, yes, a lavender smell is so distinct, right? All of the starring plants in my books are some speculative version of a real existing plant. For The Forgetting Flower, it was an African violet hybrid. As a professional gardener, I was often advising people on what plant to grow for scent, like daphnes are sweet, cistus is spicy, etc. And I thought, “What if a plant had a scent that was dangerous to inhale? What would that look like? That would create a lot of problems!” And the story formed from there.

Harvesting the Sky was about a speculative apple tree and had a similar what-if question: What if there were an apple that could heal people? Who would want it and who would think it was too dangerous to bring to the public? That could create a lot of hope and a lot of conflict.

With DARK PETALS OF PROVENCE, I dreamed of a mood, a beautiful countryside that was menacing. The key plant in this book, which I won’t mention because of spoilers, formed as I outlined the plot. It doesn’t exactly exist, but it would be so cool if it did. 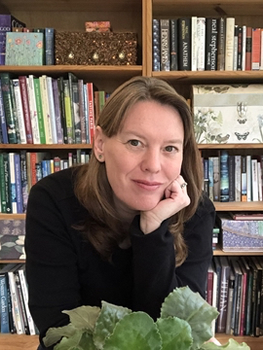 Karen in her writing nook.

I read that you lived and worked in Paris for some time, which would explain why the setting in THE DARK PETALS OF PROVENCE is so rich with detail. What aspects of France were important for you to convey?

Yes, I did, and it was a special experience. We all have romantic dreams of Paris as non-Parisians, but when you work and live there, the dream wears off. You really understand how life operates there. And a lot of it is wonderful, like the food and art and culture, and some aspects are not so great. But what I want to most convey about France is that French people are wonderful. There’s an unfortunate stereotype of them being mean. They’re not mean, they’re just respectful of people and poised by nature. So when a person is abrasive and selfish, they don’t care for that. But the French are incredibly generous. Once you have a French friend, you have a friend for life.

THE DARK PETALS OF PROVENCE, while beautifully written and infused with gorgeous imagery, is ultimately a modern mystery—can you share a little about what inspired the story?

I always loved the Marcel Pagnol books, Jean de Florette and Manon of the Spring. They came out in the 1960s and were made into movies in the 1980s, which led to the whole Provence tourism craze. I loved the allure of those books (and movies). And I thought I’d write a modern-day version inspired by it. So I asked myself who hung out in modern-day Provence. Well, there are the farmers and locals who actually work and live there, there are lots of tourists in summer, and there are the super wealthy who own homes but only visit during vacation breaks. I decided to put all of those people together. 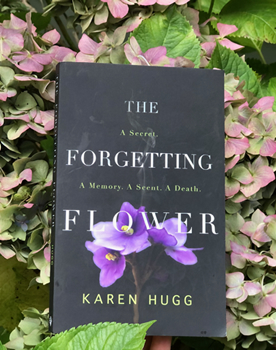 April Pearce is a wonderfully layered character, and in some respects, she has my dream job—taking photographs of stunning scenery. (One day I WILL get to Holland to see the glorious tulip fields.) How did her character develop for you?

Gosh, I’d love to visit the tulip fields in Holland! That reminds me of a great book about plants called The Black Tulip. It’s 19th century literature but worth the read.

April developed because I wanted to write a “fish out of water” story. An American who doesn’t fit in to her surroundings. But I needed a reason for her to be in France, and of course Provence is one of the most widely photographed regions in the world. So it made sense to make her a photographer. As for her personality, she has a bit of me from a long time ago. There were times when I felt like I didn’t fit in and couldn’t accomplish a given mission at my job or what not. Her insecurities stemmed from mine. And her passion for the perfect photo also stemmed from my passion for plants.

Similarly, the character of Cedric is an interesting one. He’s a reluctant mayor who’d rather work as an attorney and live in Paris but is doing a duty for his childhood village. Was there anyone in particular who inspired him?

Cedric’s easygoing and compassionate nature was drawn from a few different French people I know. He is what I’m talking about when I say French people are so special. Also, the physical look of the Jackson character in the 2018 version of A Star is Born worked its way into him. He’s kind of a hippie, relaxed, French Bradley Cooper type (but without the dark side).

Bellingham, Washington, the setting for a new cozy mystery.

And where did the sweet, sometimes volatile character of Ivo come from?

Ivo evolved from special needs teens I’ve met over the years. My daughter is cognitively delayed, mostly due to a rocky start in life as an orphan, and so I’ve spent time with a lot of special needs kids. They’re all different and all great in their own way. One unique thing about my daughter is she doesn’t have a medical diagnosis that can be traditionally slotted into a chart. If you’re not diagnosed as autistic or Down’s syndrome or ADHD, you can fall through the cracks. Oftentimes, teachers and therapists even struggle with how to help these kids. My daughter is one such child. And I saw Ivo as that way as well. 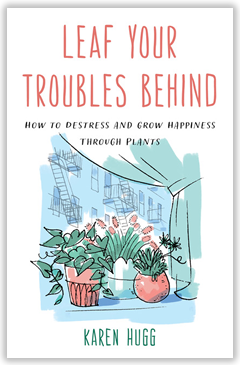 In addition to writing mysteries and thrillers about plants, you also write non-fiction books about plants and how they can be used for healing or affect us in other ways. What is something about plants you wish more people understood?

Thanks for mentioning that! My book, Leaf Your Troubles Behind: How to Destress and Grow Happiness through Plants, compiles the latest research on the mental health benefits of plants. And the research is compelling! Nature was our first home, but we’ve wandered away from it and are often stressed out and depressed. So I developed a system for how to be happier that’s based on that research and my own professional gardening experience. In the book, I include ways people can incorporate plants in their lives to relax more. And hint: You don’t need to garden!

Lavender is beautiful and smells amazing, but I think tulips win the top spot in my heart, followed closely by hydrangeas. What are your top three plants and why? 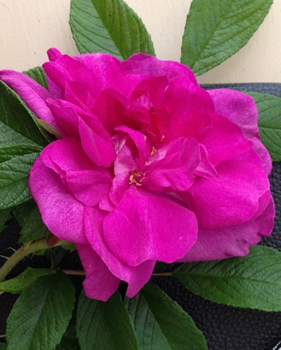 The Rugosa rose is one of Hugg’s favorite plants.

Oh wow. Those are lovely choices! It’s incredibly difficult to narrow my choices, but I’ll try to pick a tree, a shrub, and a perennial that most people in North America could grow. For a tree, I’ll say Bloodgood Japanese maple because it has purple leaves, scarlet fall color, and it’s very easy to care for. For a shrub, I’ll pick pink rugosa rose, which has magenta flowers on a tough-as-nails shrub that has cool corrugated leaves and is hardy to Zone 3. For a perennial, I love many, but a favorite is May night salvia because it’s a bee magnet and it’s so beautifully dark purple. Also, a workhorse.

What can you share about what you’re working on next—non-fiction and fiction?

I’m finishing up a cozy mystery called Deal with the Devil’s Ivy, which features a houseplant shop owner who investigates a murder in the small town of Bellingham, Washington. My husband is from Bellingham, and I’ve spent a ton of time there visiting family. Bellingham is the last stop before the Canadian border in the Pacific Northwest and has its own unique history and culture. During the pandemic, I read a lot of cozies because I felt so stressed out and, like so many, experienced a lot of loss. I wanted to read a light funny book before bed. Eventually, I got inspired to write one, so now I want to pass on that fun and humor.

As I wrote Leaf Your Troubles, I realized I had a lot more to say about the gardening section. In my own gardening work, clients have always wanted low-low-maintenance gardens, so I’m outlining a nonfiction book called Hands Off Gardening. It teaches readers how to create a beautiful garden and then ignore it. I’m kind of kidding. But it is about creating a pretty garden you don’t have to spend all your time maintaining. Puttering in a garden is fun, but sometimes you just want to kick back and relax. And I hope to help more people do that.