Stranded on a Tropical Island with a Killer 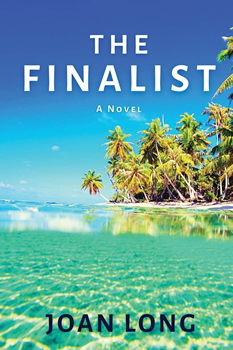 Ever wonder how a writer is selected to continue a legacy series after a bestselling author’s death?

In THE FINALIST, debut author Joan Long imagines a terrifying scenario. Five finalists are chosen to complete deceased novelist Wyatt DeMay’s unfinished manuscript in a competition overseen by his wife Lily on his isolated tropical island. The winner stands to gain a million dollars and instant fame, but when attendees begin turning up dead, finalist and single mom Risa Marr fears she may never make it home to her child, let alone be chosen for the opportunity of a lifetime.

The Big Thrill caught up with Long to find out more about her writing journey, the inspiration for THE FINALIST, and what she’s working on next.

How did you come to write THE FINALIST?

I attended SleuthFest and met author Ace Atkins. At the time he was writing the Robert B. Parker Spenser series. At the same conference, it was announced that Reed Farrel Coleman had been chosen to write Parker’s Jesse Stone novels. The idea of writers being selected to pen a legacy series became the initial spark for my book THE FINALIST. It’s the story of a single mom who enters a competition to complete a bestselling thriller series, only to find herself stranded on an island with a killer. 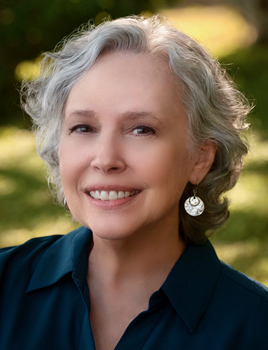 Which came first, plot or characters, and why? Are you an outliner, or more of an organic writer? How did the story evolve? Did you know the ending before you began?

For THE FINALIST, the plot came first. I wrote an outline, followed by a short synopsis. I liked the story line so well that I completed the first draft before concluding that my story’s point of view didn’t work as well as I’d hoped. I had to rewrite the novel before I was happy with it.

Tell us about your writing process. Do you write every day? Do you have a dedicated writing space? How do you balance writing with family life?

When I’m working on a first draft, I prefer to write at least four hours a day, six days a week. When I’m editing, my schedule is more flexible. I have a desk in a cozy office in my house. But if the weather is nice—which it often is in Florida—I prefer to take my laptop to my back porch and write there. My family is incredibly understanding and supportive of my writing.

Would you describe this locked room type of mystery as Agatha Christie on a tropical island? 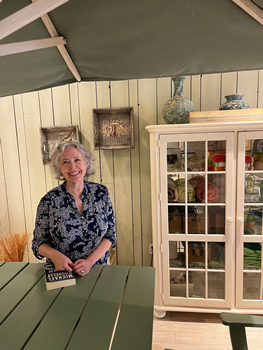 Long at her local recreation center in Feb. 2022

I’m humbled whenever someone describes THE FINALIST as Agatha Christie on a tropical island. What a wonderful thing to say!

We’ve been in the pandemic so long that I hope readers will enjoy the tropical getaway. The island setting is important to the locked room style of the novel. It allows for a limited number of suspects and, because there is no way to escape from the remote island, increases the likelihood that the characters will suspect each other. They come from vastly different backgrounds and range in age from their late twenties to mid-sixties. How they react to having no communication with the outside world gives the reader multiple reasons to guess about their motives.

Risa is gutsy but doesn’t want anything to prevent her from going home to her daughter. What about her intrigues you?

Risa is not based on anyone I know. Each of my characters is a composite of personality traits and is someone I’d personally find fascinating. I may not like them, but I would think they were interesting. 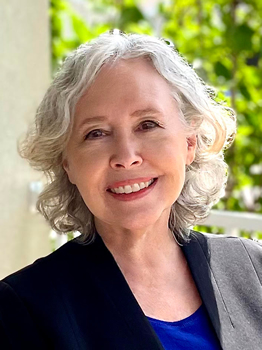 Because THE FINALIST has such a small cast, I found that my biggest challenge was point of view. I couldn’t limit the POV solely to my protagonist. Yet, I didn’t want the other characters to take over the story. The information exposed by each POV character can only be revealed by that one particular person.

Creating the tropical location was the easiest part of writing THE FINALIST. I love the sights, sounds, and feel of a warm-weather setting. I’m rewarded when readers tell me they can hear the surf or want to dig their toes into the sandy beach while they bask in the sunshine.

What research did you need to do for this story?

Some of the things I researched were tropical plant life and local cuisine. How big are satellite phones anyway? And how long does it take to dig a grave in sandy soil?

There are quite a few twists and surprises. How did you work them in?

Foreshadowing was key to the surprises in my novel. I provided hints well before each twist. Someone could get lost in those jungled trees? Why, yes, they could—hint, hint. 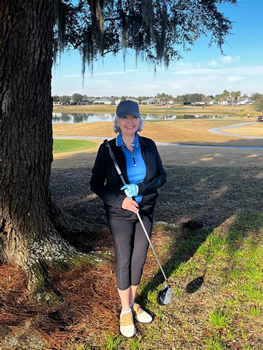 Long on a Central Florida golf course in Feb. 2022

Learning how to read was difficult for me. In second grade, I checked the same book out of the school library each week because the pictures were so vivid that I could make up my own story instead of needing to read the words. It wasn’t until I discovered Nancy Drew that I actually cared about reading. The mysteries hooked me, and by age ten I was trying to write my own.

As an adult, I continued to write and eventually became a finalist in several writing contests, including Minotaur Books-Malice Domestic’s competition for Best First Traditional Mystery Novel.

Tell us about your publishing journey. How did you get an agent, and then your publisher?

It took almost exactly five years from when I first came up with the idea for THE FINALIST until I received a contract. During that time, I queried several agents and received offers from two. Since neither quite seemed like the right fit, I hired a literary attorney to negotiate my contract.

How did I get a publisher without an agent? While at conferences I met two editors who expressed interest in my novel and invited me to submit to them. One manages a mid-sized press while the other is at a co-publisher at a growing, small press specializing in crime fiction. The small press made the offer. I highly recommend pitching at conferences!

How are you marketing THE FINALIST? 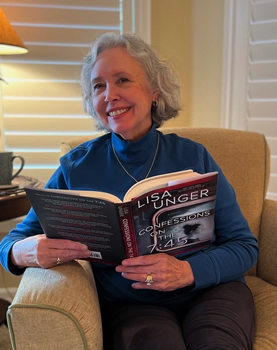 Long reads in her office.

My writer friends have given me excellent marketing advice about social media, reviewers to contact, and so much more. I will always be grateful for them. They’ve offered personal introductions that have resulted in magazine features. They’ve been immensely supportive of me and my debut.

I’m fortunate to live in Florida, where there are countless readers who enjoy mysteries, suspense, and thrillers. Much of my marketing outreach has centered on my home state.

I’d also like to give a huge shout-out to ITW’s Debut Author program. I am beyond impressed! Everyone involved has been generous with their knowledge and has surpassed all my expectations while promoting debut authors. They deserve acknowledgment and so much praise!

Please tell us what’s next for you.

THE FINALIST is a standalone. My characters have been through so much, I’d hate to throw anything more at them. That would be cruel! Meanwhile, my current work-in-progress is a psychological suspense and is set on Florida’s west coast, near the beautiful Gulf of Mexico.