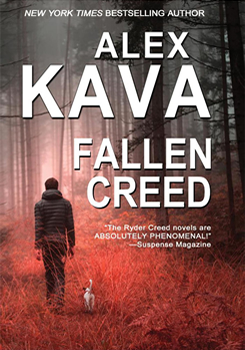 You don’t have to love dogs to enjoy Alex Kava’s Ryder Creed series about a K9 handler and his crimefighting canines. But it sure makes her new thriller FALLEN CREED an even more fascinating read.

FALLEN CREED tells the story of Creed and his scent dog Grace who are searching for a missing woman—and a murderer too—in a blinding Nebraska blizzard when suddenly the trackers become the trapped and have to find a way to survive.

Filled with lots of action scenes and colorful characters, some of the most moving moments involve ex-Marine K9 handler Ryder Creed’s devotion to Grace and how he’s willing to give up his life to save her if necessary.

“This goes back to Creed’s training and experience as a Marine handler,” Kava says. “Military dogs, by tradition, are given a rank higher than their handler. The honorary rank reinforces that the bond is a sacred, respectful relationship. In fact, in Afghanistan, the enemy knew how demoralizing it was when a unit lost its handler and/or dog. They purposely tried to take out the dog. Talk to any of those handlers, and you don’t even need to ask the question. You know they would take a bullet for their dogs.

“On top of that, Creed had rescued each of these dogs, and he has a deep sense of responsibility to care for them. To him, they are a part of his family.” 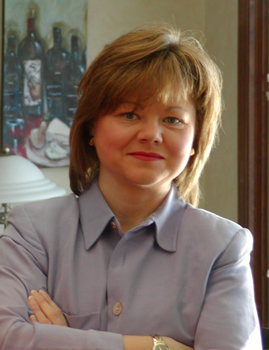 The readers of Kava’s bestselling books love that relationship between Creed and his dogs—especially Grace.

“Grace has quickly become one of my readers’ favorite characters,” she says. “She’s a scrappy Jack Russell terrier who was abandoned at the end of Creed’s long driveway. All of Creed’s dogs are rescues. None of them are the standard breed traditionally used for scent dogs. The theme of rescue flows through the series, and it doesn’t apply only to the dogs.”

Asked to describe Ryder Creed, she says: “Creed is smart. He’s physically and mentally strong and has the heart of a rescuer. He’s very much a reluctant hero who constantly finds himself caught up in other people’s lives. At the same time, he’s someone who would be perfectly happy to live only in the company of his dogs.”

This is the seventh Ryder Creed book. Kava—who previously wrote a series featuring a woman FBI agent—says she got the inspiration for a K9 handler as her protagonist during a dinner she had with some law enforcement officers she met while doing the Maggie O’Dell FBI thrillers. 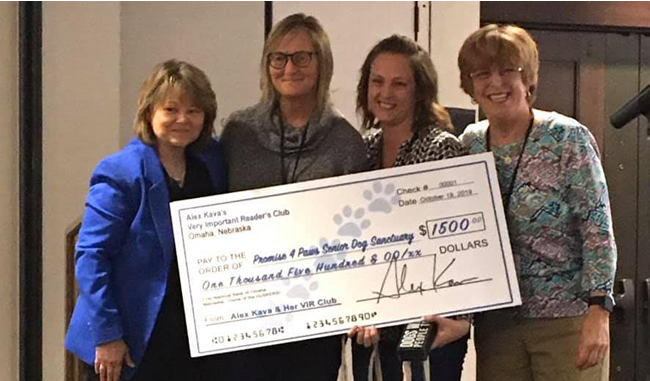 “Dr. Melissa Connor, who is now the Director of the Forensic Investigation Research Station at Colorado Mesa University, was talking about cadaver dogs,” she says. “Before that, I had no idea how the process worked. I wanted to know more. I decided to include a handler and dog in my next Maggie O’Dell book. So Ryder Creed and his scent dog, Grace, were introduced in Stranded back in 2013.”

Meanwhile, FBI agent Maggie O’Dell is still a big part of the Ryder Creed books, including the latest, FALLEN CREED.

“I loved both of those characters. So did my readers. But Creed isn’t law enforcement, so I needed another character to come along for the investigative side,” Kava says. “It made sense to bring Maggie O’Dell into the new series. My entire career I’ve tried to listen to my readers. They’re the reason I have a career. And many of them love Maggie O’Dell. The combination of Ryder Creed and Maggie O’Dell turned out to work very well for everyone involved, including Ryder and Maggie.”

Writing about Creed and his dogs is clearly a labor of love for Kava, who uses some of her own experiences as inspiration. 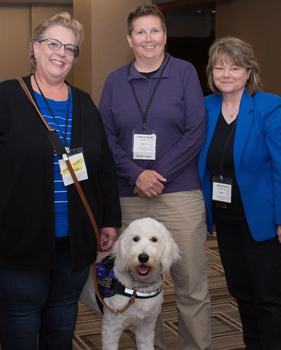 “I’ve loved dogs since I was old enough to crawl and follow them around,” she says. “With the exception of my years in college, I’ve always had a dog living with me. These days, my pack usually includes three to four, but in the last 14 months I lost two of my sweet boys: Duncan and Boomer. You’d think it’d be good therapy to write about dogs while grieving, but it doesn’t work that way for me. I did write my Scout into the series, although instead of a West Highland terrier, he’s a black Labrador.”

In the books, Creed gives his dogs “pink elephant” toys as a reward for a job well done. Kava says she does the same at home too. “My dogs are nowhere near as well behaved or trained as Creed’s are. But the pink squeaky elephant has been a favorite.”

Many of Kava’s thrillers (including FALLEN CREED) are loosely based on real-life crimes—and she does a lot of research, not only into actual crimes and law enforcement techniques, but also into learning more about the amazing things dogs can do.

“I do a ton of research. I’m constantly learning new things about dogs and their capabilities. But I love the research part of my job. With each book in the Creed series, I try to introduce my readers to something different that dogs are trained to sniff out. In Reckless Creed, it was the bird flu to help stop a pandemic. That book was published in 2015. I never dreamed that five years later, dogs would be used to sniff out COVID-19 during a real pandemic, but they are.” 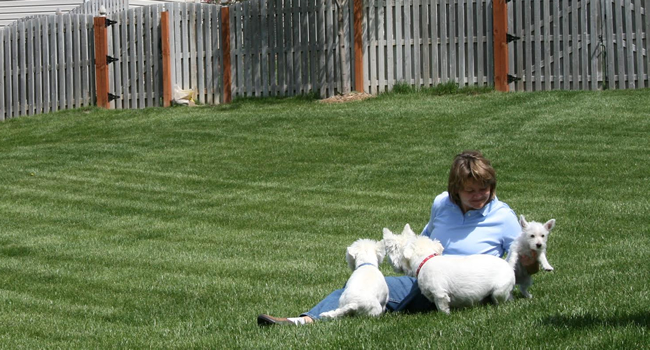 Like her character Ryder Creed, Kava is happiest surrounded by her pack of Westies.

Unlike many authors, Kava does not set herself a daily word count when working on a book.

“I don’t write every day. I do writing marathons when I’m ready to finally put it down on paper. Weeks at a time with little interruption, if I’m lucky. And yes, sometimes a good portion of it is still pen to paper.

“With each novel, I fill two to three notebooks with research, bits and pieces of dialogue along with setting description, POVs, and ideas for chapters. I have a vague outline for the first third. Write it. Outline the middle third. Write it. Then the last third. Oh, and I need to know three things before I start: the title, the opening chapter, and the ending.”

So what’s next for her? “I’ve just started Midnight Creed, and I’m working on two other projects.”