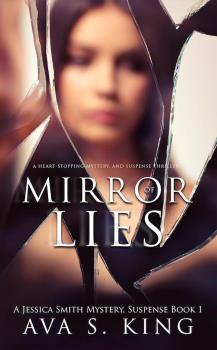 Alison and Jessica were the best of friends in middle and high school. Fifteen years later, Jessica, now an up-and-coming journalist, learns that Alison has been killed in a car accident. But that’s not the most troubling part of this tragedy.

Alison died with a secret that only she, Jessica, and a small group of friends know. Her fear is that secret didn’t die with her friend.

If it didn’t, what does that mean for her and the others who know what happened all those years ago?

What do you hope readers will take away from MIRROR OF LIES?

That Nikki Garcia, my female protagonist, can deal with dangerous and complex issues in carrying out her private investigative work. Nikki can move easily from a board room to a scrappy street encounter with the bad guys. She can also work on international cases, not just work in the US.

How does MIRROR OF LIES make a contribution to the genre?

A private investigator who speaks Spanish, Nikki can be effective as an undercover investigator in Spanish-speaking countries. Her linguistic abilities combined with the fact that she’s a woman make her an especially savvy PI in situations where no one would even suspect she’s an investigator.

Was there anything new you discovered, or that surprised you, as you wrote the book?

As my writing career progresses, I’m amazed at two aspects of my writing. The first one is the twists and turns the novel takes, surprises that even I had not anticipated at the start of the novel. The second one is how the research I do for the novel often provides additional plot twist possibilities.

No spoilers, but what can you tell us about your book that we won’t find in the jacket copy of the PR material?

Today’s technology provides instant communication around the world and is often taken for granted, yet that technology, or lack thereof, can disrupt situations in many countries. It only takes a seemingly miniscule action to disrupt the communication systems we’re so used to relying on to bring momentous change in the lives of characters.

One of my favorite authors in this genre is Harlan Coben. It’s the twists and turns, the unexpected, and the unraveling of puzzles in Coben’s writing that fascinate and influence me.

A book I’ve never forgotten is Day of the Jackal by Frederick Forsyth. Day of the Jackal is superb. It’s such a simple premise that Forsyth used, a birth certificate of a deceased person to obtain passports and other documents to carry out a deadly mission. In Jackal, that mission falls short, but the assassination could easily have happened in real life.

Technology and the law have changed that situation from happening in real life today. But technology also provides other elemental premises in our world that can be used to create a complicated plot. And there’s a certain elegance to an ordinary idea creating a thrilling storyline.

Born and raised in TN, she is a filmmaker and lover of all things mystery and suspense. In addition to writing, Ava loves bringing her novels to life on the big screen starting with Agent Red series.